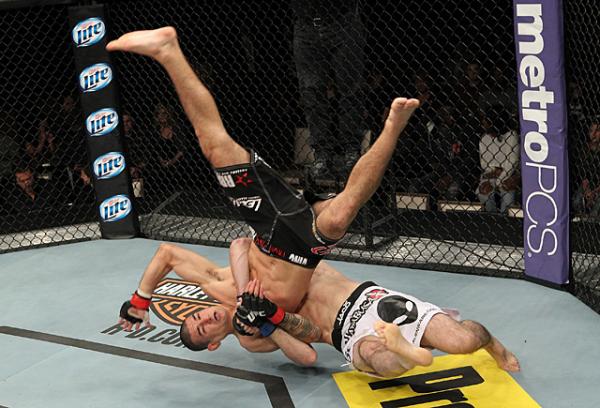 Rustam Khabilov has made a name for himself with spectacular suplexes. | Jim Kemper/Zuffa LLC UFC/Getty Images


ALBUQUERQUE, N.M. -- The statement above was posted by Rustam Khabilov one day after he created his official Twitter account and two days after he stepped into the Octagon for the very first time.

Some four months later, there is still nothing that captures the essence of Khabilov’s Ultimate Fighting Championship debut quite like that tweet. In the days leading up to Khabilov’s bout with Vinc Pichel at “The Ultimate Fighter 16” Finale, his teammates at Jackson’s Mixed Martial Arts had a consensus request for the decorated sambo practitioner: throw a suplex.

Considering Khabilov’s background -- he won multiple sambo titles in Russia, as well as a combat sambo world championship in 2007 -- it was a reasonable expectation. Ever since the unassuming Dagestani walked through the doors of the New Mexican gym a little less than two years ago, he had displayed an uncanny knack for getting the upper hand, even against the most celebrated of training partners.

“He came in and he was fighting one of our high-level guys, and our high-level guy was having to fight a wrestler,” striking coach Mike Winkeljohn told Sherdog.com. “I don’t want to throw our guy under the bus [by revealing his name], but he was one of the bigger names in the UFC. I said, ‘Rustam, take him down.’ He says, ‘OK coach.’ He goes in there and he takes him down over and over and over and really frustrates this UFC fighter.

“At this time, no one knew who Rustam was,” he added. “He gets out of the cage and says, ‘Coach, take him down? Easy.’ That’s his level.”

On Dec. 15, Khabilov managed to appease his Jackson’s MMA brethren and increase his notoriety in one fell swoop. Make that three, to be exact.

Photo: Dave Mandel/Sherdog.com
Medeiros is a perfect 9-0.
The lightweight nicknamed “Tiger” executed a trio of belly-to-back suplexes against Pichel, the last of which left the American dazed on the canvas and allowed Khabilov to pounce for the finish with a series of follow-up punches. For those watching in person at the Hard Rock Hotel and Casino in Las Vegas or at home on television, a star was born. For the author of the highlight, it was not that much different than the day he frustrated a more well-known teammate with his takedowns in practice. Khabilov expects to succeed.

Khabilov’s sophomore venture with the Las Vegas-based promotion comes against the undefeated Yancy Medeiros at UFC 159 on Saturday at the Prudential Center in Newark, N.J.

This time, Khabilov will likely enter the cage as a more well-known commodity than his opponent. After winning his first nine professional bouts, Medeiros has not competed in almost two years. His last appearance came in June 2010, when he knocked out Gareth Joseph in the second round at Strikeforce/M-1 Global “Fedor vs. Werdum.” The Hawaiian’s two bouts under the Strikeforce banner were contested at 205 and 185 pounds, adding an element of the unknown to Khabilov’s second UFC appearance.

“I really don’t know what to say about [him] because he fought in two different weight categories and he hasn’t fought for a couple years,” Khabilov said. “I don’t know if he got better or if he got quicker or if he got faster -- what kind of pluses or minuses he has. I want to wish him luck, and we’ll just have to see what happens.”

While Khabilov appreciates the recognition he has received since defeating Pichel -- “Fans are sending me pictures for autographs. I’m really enjoying it because I’ve never had that happen,” he says -- even a small measure of fame tends to come with a price. Khabilov got plenty of attention for tossing Pichel around the cage, but it was another throw from his past that surfaced around that same time that temporarily cast the sambo expert in a different light.

Shortly after Khabilov’s UFC debut, a video surfaced of the fighter throwing a cup of soda on a female at a McDonald’s in the Ukraine. The clip is short and not especially memorable. In the grand scheme of egregious offenses by UFC talent, it falls far below Quinton Jackson leading police on a high-speed chase or Forrest Griffin and Miguel Torres tweeting rape jokes, but Khabilov has nonetheless received his fair share of unwanted scrutiny for an incident he claims occurred approximately four years ago. It did not help that several websites and forums opted to use the term “assault” in headlines describing the video.

Still, Khabilov manages to maintain a sense of humor about the regrettable moment and sees it as firmly in his rearview mirror.

“There were four girls sitting a couple tables away from us, and they were under the influence of something,” Khabilov recalled. “I’m not sure what they were on. I was sitting and eating, then she looked at me and I looked at her and she threw me the finger. So I threw her the finger. So she threw another finger, so I threw another finger. I just wanted to give her a little something to cool her down and give her a drink because I’m such a nice guy. I basically cooled her down and splashed the Coke on her.

“But I really want to apologize to the girls. I didn’t mean to do that,” he added. “I shouldn’t be concentrating on those kinds of people, because I’m not that kind of guy. I’m not a woman abuser; I respect women. I also learned from my mistakes. In the future, I’ll try to avoid the situation because this one video brought me so many problems and so much drama. It was my mistake.”

The incident seems out of character for a 26-year-old who has, by most accounts, been able to blend in nicely in his new surroundings in the United States. Having picked up bits and pieces of English since making Jackson’s MMA his training home, Khabilov has served as something of an unofficial translator for fighter-to-coach interactions involving the ever-growing Russian contingent in the gym. He has embraced the concept of family fostered by the renowned Southwest fight team, crediting the positive influences of stalwarts such as Jon Jones and Carlos Condit for aiding in everything from training to acquiring a properly fitted mouth guard. Most importantly, he has impressed his coaches with his habits.

“I started working with him on his strikes, and he was one of the few that would take what I would work with him on and go in the corner and just work on it forever -- a lot of time on it, over and over,” Winkeljohn said. “He had that work ethic.”

Finish Reading » “Out of all the guys in our gym, he’s one of the top two or three that I think will be a UFC champion shortly.”