After some 40 bouts against some of the most illustrious fighters in the sport, Renato "Babalu" Sobral had gold strapped around his waist for the first time on Nov. 21, winning the Strikeforce light heavyweight title from Bobby Southworth after opening a cavern above Southworth's eye with a standing elbow. The gash forced a TKO stoppage between rounds one and two.

Southworth was allowed to continue for a brief period after doctors got a first look at the cut, and thus abandoned his conservative approach by bullying Sobral against the fence as the horn sounded. The finish drew boos, as Southworth dejectedly paced the cage with a glob of blood-stopping glue lodged in his brow. Sobral, riding a four fight win streak, welcomed the rematch any time. That won't be soon, as Sobral is first set to face Matt Lindland on the Affliction "Day of Reckoning" pay-per-view on Jan. 24.

The title change headlined "Destruction," the sixth and final offering of the year from Strikeforce. The card featured the return to officiating of one of the sport's most iconic figures, "Big" John McCarthy, who left the sport in late 2007 to work as a television analyst. An announced 8,152 were in attendance at the HP Pavilion in San Jose, Calif., about the same number who turned out for the last Strikeforce card at the same venue, a June event headlined by Josh Thomson vs. Gilbert Melendez.

The night's original main event, a UFC 49 rematch between Josh Thomson and Yves Edwards, fell through after Thomson suffered a toe injury when he hit a sparring partner's elbow with a kick. Veteran striker Duane "Bang" Ludwig stepped in and stepped up, notching a unanimous decision win over Edwards by landing hard strikes and limiting the damage Edwards could do off takedowns. Thomson, who was doing ringside commentary for the HDNet broadcast of the event, did not seem interested in defending against the winner, saying he'd like to fight a star like Frank Shamrock when he returns in March. 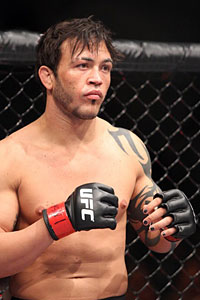 The night was capped explosively, as Scott Smith added another highlight KO to his reel by creaming fellow UFC vet Terry Martin with a crippling right cross in the opening sequence of their bout. Smith landed three punches total in the 24-second fight.

In other action, 40-fight veteran Joe Riggs declined to serve as a stepping stone for the up-and-coming, 6-1 Luke Stewart in an oft-delayed bout. Riggs, recovering from a debilitating back injury, was in old form, landing shots from inside Stewart's guard with a freshly-broken hand until the referee called it in the second round.

Kim Couture got her first pro win, bouncing back from a jaw-breaking loss in June to overwhelm the inexperienced Lina Kvokov with a series of punches. The bout was panned by some bloggers as not ready for primetime.

In the television opener, Luke Rockhold sunk a rear-naked choke in the first round to take a win over the more experienced Nik Theotikos. In action before the cameras turned on, promising featherweight Darren Uyenoyama bloodied Brad Royster en route to a unanimous decision win. Uyenoyama, who has won three straight in Strikeforce, will compete in a featherweight tournament being put together by the Japanese outfit Dream in March.