Late-notice injuries are a part of the game when your average training camp essentially combines a never-ending cycle of blunt-force trauma with the kind of cardio conditioning that requires a vomit bucket on hand at all times. Look up and down the card of this Saturday’s UFC 108 event and you’d think Dana White has made a hobby of ticking off Voodoo Gods, as the combination of last-minute injuries and Quinton Jackson’s unholy decision to try and replace Mr. T all but sabotaged the show.

Yet through sheer ingenuity and/or pure desperation, fans can still bank on a quality night of fistic pleasures. Whether it’s the sight of Thiago Silva’s death stare, Dustin Hazelett and his propensity for turning opponents into mutilated Gumby toys or the possibility of watching Gilbert Yvel show Mike Tyson how to be a true-blue psycho, there’s something for every palate. Read on and get all your knowledge needs handled.

The Breakdown: A case study in incredible talent coming at a heavy price, Yvel is a gifted kickboxer whose behavior also happens to border on being sociopathic. On the opposite end of the mental health spectrum is dos Santos, who has developed into one of the sport’s premier heavyweight prospects while maintaining a firm grip on his sanity.

Once upon a time, this fight would have been compelling, but Yvel is a shell of his old self and has lost the technical sheen on his game that once made him so dangerous. Now content to keep his hands low and wing lazy strikes, Yvel’s defense is full of holes that an intelligent striker like dos Santos will easily ferret out.

Just watch dos Santos’ fight with Mirko Filipovic at UFC 103 and you’ll see a fighter who understands the importance of strategy and how to execute one correctly. That sort of fight IQ has been missing from Yvel’s game from day one, and he’ll learn yet again what happens when talent alone can’t win you a fight. 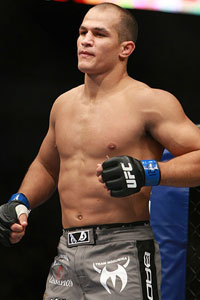 File Photo
Dos Santos
The X-Factor: Any 240-pound human being with 18 years’ worth of muay Thai training is going to be dangerous, and that is something dos Santos must keep in mind. Yvel is still more than capable of ripping off another highlight-reel worthy KO. A motivated Yvel is the Yvel the world has been waiting for, and if he can reclaim just a bit of his old self, he could remind the same people who wrote him off why he was once the future of the heavyweight class.


The Bottom Line: Holding out hope for Yvel is like doing the same for Mike Tyson: Your time is better spent on other endeavors. Instead of admiring Yvel’s brilliant brand of muay Thai, we’ll be stuck watching him absorb a beating from a younger version of himself. Three synapse-scrambling rounds for Yvel come to a merciful end with dos Santos notching a unanimous decision.