The concept of “better late than never” will face its stiffest test yet at UFC 109 on Saturday. For those of you into trivia, the headlining bout of Randy Couture vs. Mark Coleman was originally scheduled for UFC 17 -- yes, I said UFC 17 -- before a Couture injury set the table for Pete Williams to score one of the defining knockouts in MMA history.

That was more than 10 years ago, back when the UFC couldn’t even fill civic centers made of plywood and duct tape. Quantum leap to today and both Couture and Coleman will fight in comfier confines, but the stakes are even higher than they were in ’98.

The rest of the main card isn’t quite so prone to nostalgia, but makes up for it with a high violence probability quotient. Whether it’s the world’s most dangerous real estate agent, Chael Sonnen, taking on Nate Marquardt or Paulo Thiago looking to claim his second American Kickboxing Academy scalp from Mike Swick, 2010’s latest MMA fix should keep us all mellow until at least Monday morning.

The Breakdown: The inclination here is to write this fight off as a case of the UFC cashing in on the names of two legends on the wrong side of 45. And to a certain extent, that’s a fair point, but both Coleman and Couture are coming off of wins over guys more than a decade younger than them, so maybe this is just a fair fight. 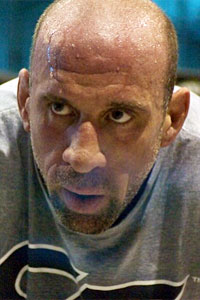 Terry Goodlad/Sherdog.com
Can Coleman's lungs go 15?
A fight is exactly what Coleman wants to avoid, as his game hasn’t evolved much since the days when he helped make ground-and-pound a revolutionary concept. Coleman’s bout with Stephan Bonnar at UFC 100 showed his striking limitations, and his grappling remains stuck in the late 90s.

What “The Hammer” does have going for him is Bill Brasky-level strength and a bench-pressing double-leg shot that has been known to level small cities. Neither of those attributes will intimidate Couture, though, who practically wrote the bible for using Greco-Roman wrestling in MMA. Unlike Coleman, Couture has also spent much of his career developing the striking and grappling knowledge to complement his wrestling base.

Being a decent striker with a grasp of basic fundamentals is an incalculably huge advantage in this fight for Couture. For instance, Coleman doesn’t really set up his takedowns. Once upon a time, Coleman was spry enough to blast a double leg from a mile away, but he just can’t move like he used to and his boxing is too slow and sloppy to serve as an effective
segue to a takedown.

Even the worst-case scenario for Couture -- Coleman blasting a vintage double leg of doom -- isn’t that bad since “The Natural” excels at stuffing takedowns and immediately transitioning to the clinch. That’s a place Coleman doesn’t want to be since the last thing he needs is to get sucked into one of Couture’s dirty-boxing clinics.

Finishing skills are a necessary component of any modern fighter’s repertoire, and that is where the biggest disparity lies in this fight. Coleman’s ground-and-pound is his only offensive weapon. He has neither the power to finish Couture with it nor the conditioning to use it effectively for 15 minutes. Not a good sign considering Couture will be putting a strain on Coleman’s gas tank from the first minute.

The Bottom Line: For as long as Coleman’s lungs hold up, this should be an entertaining wrestling match. Once he starts wilting, though, this fight will be all but over. Too much striking from Couture and too little conditioning from Coleman will net Joe Rogan’s hero a TKO win late in the second round.