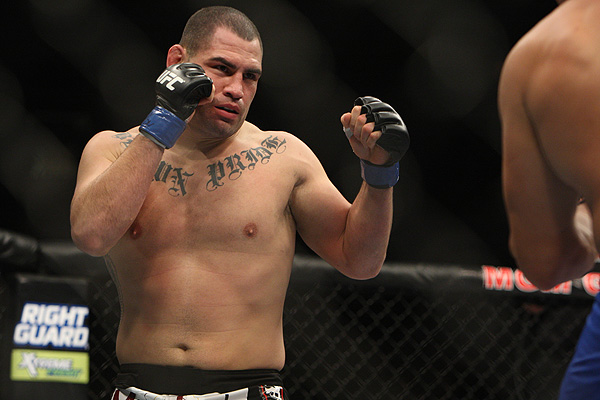 
For the second consecutive year, the Ultimate Fighting Championship’s traditional Memorial Day Weekend card puts the spotlight directly on the heavyweight division. While UFC 160 does not feature an all big-man main card like UFC 146, it does include two pivotal matchups on Saturday at the MGM Grand Garden Arena in Las Vegas: a title contest pairing reigning champion Cain Velasquez with Antonio Silva and a co-feature pitting former titleholder Junior dos Santos against cult hero Mark Hunt.

Silva, for one, hopes that this card turns out nothing like the one a year ago, when Velasquez bludgeoned him with heavy ground-and-pound on the canvas for a first-round technical knockout victory. Meanwhile, dos Santos hopes to set up a third meeting with the heavyweight champion by winning impressively against Hunt, the unlikeliest of title contenders.

Here is a closer look at UFC 160, with analysis and picks. 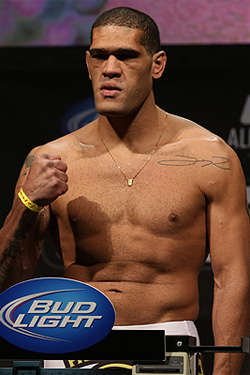 Photo: D. Mandel/Sherdog.com
Silva has won two straight.
The Matchup: It was only a matter of seconds before Velasquez planted Silva on his back in their first encounter at UFC 146. An elbow from the American Kickboxing Academy standout had Silva bleeding almost immediately, and the rout was on from there. Velasquez continued to batter his larger foe with vicious ground-and-pound from above, staining the Octagon floor with the Brazilian’s blood. Silva was granted a brief respite when referee Josh Rosenthal temporarily halted the beating to allow a doctor to examine “Bigfoot,” but that only delayed the inevitable, as Velasquez emerged with a TKO triumph 3:36 into round one.

Velasquez fought with a purpose that night: to re-establish that he was the top heavyweight in the world after losing his belt to Junior dos Santos at UFC on Fox 1. He reached his goal in December, dominating dos Santos over five rounds at UFC 155 to regain heavyweight gold. In just two bouts, Velasquez showed his ability to impose his will in both abbreviated and extended fashion.

Nothing about the first meeting between these two heavyweights suggested a rematch would be necessary a year later. However, a third bout with dos Santos needs time before it can become appealing, and Silva ruined plans of a Velasquez-Alistair Overeem showdown when he stopped the hulking Dutchman in the third round at UFC 156. Couple that with a victory over rising talent Travis Browne in October and suddenly, Silva was the best available contender.

Silva will never be the most athletic heavyweight in the division, but when an opponent refuses to take him seriously, the results can be disastrous, as Overeem learned. The American Top Team product has big power in his massive fists and is capable of hurting anyone when given the opportunity.

Complacency will not be an issue for Velasquez, however. The champion will not drop his hands and taunt “Bigfoot,” and unless he suffers a catastrophic injury that limits his mobility -- Browne tore his hamstring early in his bout with Silva -- he should be able to follow a similar game plan to the one that worked so well at UFC 146.

There is no doubt that Silva will have worked diligently to improve his takedown defense coming into this fight, but Velasquez is simply too quick, too relentless and too well-conditioned for it to matter. Dos Santos was forced to defend a whopping 33 takedown attempts against Velasquez at UFC 155, and although he was successful on 22 occasions, his opponent’s work rate gradually sapped his cardio.

Silva struggles at keeping more agile opponents from getting inside on him, while Velasquez is adept at throwing punches and kicks in combination before changing levels at a moment’s notice. Once he has an opponent planted, his ground-and-pound is nearly unstoppable, as Silva himself can attest.

Silva’s best chance lies in his ability to make Velasquez work from the bottom, whether that comes from rocking the champion with a counter right hand, wearing him down in the clinch or using his jiu-jitsu to sweep and reverse. Silva is not fast enough to win prolonged exchanges, and he cannot afford to spend a significant amount of time on his back, either. Employing a heavy top game is by far his best chance at scoring an upset.

The Pick: Silva was clearly limited by the amount of blood gushing into his eyes the first time around. Even if Velasquez does not open a cut of that severity again, the challenger will not be able to match the champion’s pace. Silva lasts longer, but loses via TKO in round two or three.