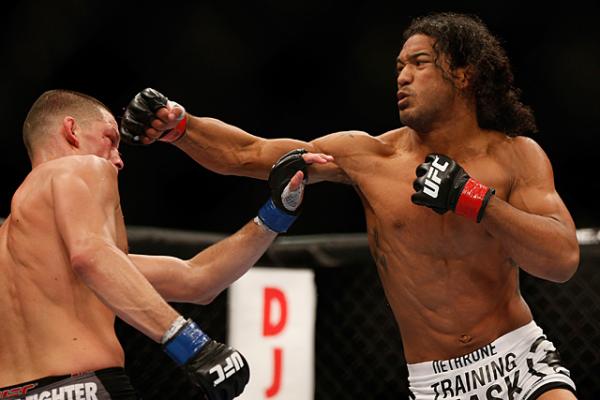 
Who does not love a fight card with a distinct theme? For its seventh appearance on Fox, the Ultimate Fighting Championship has put together an event featuring eight bouts pitting Octagon veterans against Strikeforce imports, including all four conflicts set to appear on the main draw.

Gilbert Melendez’s promotional debut is of significant interest, as the former Strikeforce 155-pound king has long yearned to prove himself against the best the UFC has to offer. He will get that chance against reigning lightweight champion Benson Henderson in the UFC on Fox 7 headliner. Additionally, Strikeforce heavyweight grand prix winner Daniel Cormier locks horns with former UFC heavyweight titlist Frank Mir in the co-main event.

Here is a closer look at the UFC on Fox 7 card, with analysis and picks:

The Matchup: If two closely contested bouts with Frankie Edgar left some question regarding Henderson’s long-term viability as 155-pound king, “Smooth” emphatically erased those doubts with a dominant performance against Nate Diaz at UFC on Fox 5 in December. The champion slowed Diaz with leg kicks, overpowered him in the clinch and even rocked the Stockton, Calif., native with power punches on a couple of occasions. Henderson has compiled an impressive resume in an ultra-competitive division, besting Mark Bocek, Jim Miller, Clay Guida, Edgar (twice) and Diaz since arriving from World Extreme Cagefighting.

Melendez has long been recognized as one of the top lightweights and pound-for-pound fighters in the world, and now the former Strikeforce champion finally gets the opportunity he has desired for so long: to compete against the UFC’s best. “El Nino” put together a remarkable run in Strikeforce, winning his last seven fights; he has not lost since dropping a unanimous decision to Josh Thomson in 2008, and Melendez has since bested Thomson twice. Melendez survived a closer-than-expected third bout with “The Punk” in his most recent outing -- an effort that the Californian said might have resulted from a lack of motivation. That should not be a problem this time around.

These two lightweights are built for five-round fights. Each of Henderson’s three title bouts have gone the distance, while four of Melendez’s last five appearances have required the entire 25 minutes. Much of Melendez’s success is predicated upon his ability to outpace his opponents, both on the feet and in scrambles and transitions on the mat, but he will find it difficult to wear down the well-conditioned Henderson in the championship frames.

Melendez’s improvement in the striking department over the years will be his best asset. He generally out-lands his foes at a greater rate than Henderson, and he has proven himself capable of landing multi-punch combinations in the pocket in recent bouts. However, Henderson was able to keep Diaz -- a volume-based striker -- off-balance thanks to a steady diet of leg kicks and takedowns. As a result, Diaz never got into a rhythm and was ultimately out-landed by a lopsided margin.

While Melendez has a solid jab, he is not as proficient a striker as Diaz. However, he is a much better wrestler, and his ability to follow punching combinations with takedown attempts could sway the fight in his favor. Henderson’s athleticism and upper-body strength make him difficult to hold down, and Melendez’s willingness to initiate scrambles to improve position could result in him giving up his back or being trapped in the champion’s dangerous guillotine. Being nearly impossible to submit gives Henderson a freedom to be aggressive with ground-and-pound and submission attempts that few fighters are allowed.

Henderson can negate Melendez’s attempts to set the pace with aggressive striking by outmuscling him in the clinch and wearing him down with dirty boxing and knees. Henderson’s ability to consistently land kicks to the legs and body will also slow down the challenger as the contest advances.

The Pick: This appears to be an evenly matched fight, but Melendez is not going to offer Henderson anything he has not seen already. Unless “El Nino” can consistently utilize footwork and movement to out-strike Henderson over five rounds, the champion’s strength and athleticism will allow him to gain the upper hand in wrestling, scrambles and tie-ups. Henderson retains his title by decision.