Marlon Sandro (right) and Pat Curran (left) will battle it out with huge stakes on the line. | Photo: Al Quintero

Waves will be made elsewhere in MMA, as well.

In this monthly series, we shuttle fans around the globe in an effort to broaden their MMA horizons, showcasing the best fights that might not get much attention otherwise. This month, we feature 10 bouts from six different countries, so fasten your seatbelts and hang on for a unique ride throughout world MMA.

Spoon, a 26-year-old Oklahoman, has emerged as one of the top featherweight prospects in the U.S. over the last two years. From a wrestling background, the agile and versatile “Spooner” has picked up a strong submission game at Apex BJJ, using it to tap out eight of his 10 opponents. On Aug. 20, he will challenge KOTC featherweight champion Sanchez for his title. The Fit NHB fighter is a veteran of more than 30 professional fights and only recently had a seven-fight win streak snapped by former Shooto and Sengoku champion Hatsu Hioki. 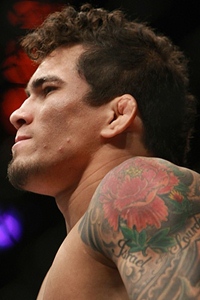 Former UFC lightweight Torres stated in a recent interview that he needed to win four straight fights to earn another shot in the promotion. Meanwhile, “Jungle Boy” has stopped his last five opponents inside the first round and continues to push forward with his fifth fight in five months against Mexican submission specialist Arreola.

Spurred by his impressive comeback and five-round decision loss to Tom Watson in September, Britain’s most popular fighter, Reid, has agreed to another bout for his home promotion, Ultimate Challenge MMA -- a spinoff of Cage Rage. Promoter Dave O’Donnell, notorious for his fondness of booking colorful personalities, has matched the “Reidernater” with fellow TV personality and soap star Jason Barrett. A 34-year-old muay Thai stylist, “Badass” has the reputation of being a loose cannon inside and outside the cage.

For the first time since having his arm snapped by a Shinya Aoki armlock on New Year’s Eve in 2009, former Sengoku and Cage Force lightweight champion Hirota will return to the ring. His welcome back fight will be no easy task, as he challenges Deep lightweight titleholder Kikuno for his belt at the promotion’s 10th anniversary show. Hirota has a background in boxing, Kikuno in karate. The two have combined for 16 knockouts, so this one does not figure to go the distance.

One of the most interesting prospects in all of the sport remains 22-year-old kickboxer Sarnavskiy. “Tiger” will take on former Chute Boxe Academy product Cesar in the marquee matchup under the League S-70 banner. Hard-nosed muay Thai stylist “Gracinha” had a four-fight winning streak snapped in May, when he moved up in weight to take on “The Ultimate Fighter” Season 9 alum Che Mills, losing by knockout inside the British Association of Mixed Martial Arts promotion. The 27-year-old also holds a Brazilian jiu-jitsu black belt under Cristiano Marcelo. Two-time Brazilian jiu-jitsu world champion Moraes will return to MMA after winning the 2011 European and world championships on the tatami. “Serginho” will face 35-fight veteran Gomes de Ribamar in the co-headliner of Jungle Fight 31. “Zezao Trator” is himself a well-rounded jiu-jitsu player and terrorized the northern reaches of Brazil for the last seven years. His aggressive fighting style seems certain to provide the biggest challenge of Moraes’ MMA career so far.

Former longtime Shooto bantamweight kingpin Kojima had long layoff after suffering a torn anterior-cruciate ligament in his knee in the spring of 2010. It has been almost two years since the 32-year-old Shooto star dropped a decision to Jussier “Formiga” da Silva in a non-title fight. His opponent, Sugawara, is currently ranked sixth in the Shooto 123-pound division after taking out journeymen Ayumu Shioda and Shinichi Hanawa. He did drop a 2008 unanimous decision to Kojima’s arch-rival, Mamoru Yamaguchi. “BJ” beat the “Afro Samurai” twice.

The Bellator Summer Series featherweight tournament will come to a close when Curran crosses swords with former Sengoku titleholder Sandro in the final. A 34-year-old Brazilian, Sandro is not in the stellar form he had in 2009-10, when he scored one brutal knockout after the next, but he still did enough to punch his ticket to the final. Curran, the younger cousin of recent UFC signee Jeff Curran, proved durable in his lightweight title fight with Eddie Alvarez in April. However, he needs to generate more offense to beat Sandro.