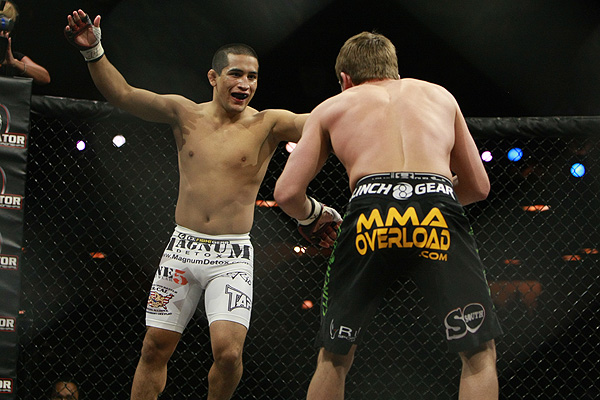 Joe Soto should have the attention of all major mixed martial arts promotions.

The former Bellator featherweight champion has overcome a career-threatening injury and resurfaced at 135 pounds. Soto will face Jeremiah Labiano for the vacant Tachi Palace Fights bantamweight crown in the TPF 18 co-headliner on Feb. 6 at the Tachi Palace Hotel and Casino in Lemoore, Calif., with Sherdog.com streaming the event live and free.

Soto, 26, won his first nine professional bouts, but a detached retina suffered in a September 2010 loss to Joe Warren sidelined him for nearly a year. A two-time All-American, he wrestled collegiately at the same Iowa Central Community College that helped launch the careers of reigning UFC titleholders Cain Velasquez and Jon Jones. The David Terrell disciple has won his last three fights, dispatching Chris David, Chad George and Cory Vom Baur with chokes. A proven finisher, Soto has secured 11 of his 12 victories by knockout, technical knockout or submission.

Labiano will carry a four-fight winning streak into the match. The 27-year-old Brazilian jiu-jitsu brown belt made his Tachi Palace Fights debut in November, when he submitted Adam Calderon with a first-round triangle choke. The once-beaten Labiano already holds titles in the West Coast Fighting Championship and Rebel Fighter organizations.

The Soto-Labiano showdown is but one under-the-radar matchup worth monitoring during the month of February. Here are nine more:

Heckman has become one of the hotter commodities on the regional circuit, rattling off eight wins in his last nine outings. The AMA Fight Club representative last appeared at CFFC 27 in September, when he recorded a unanimous decision over Brian Kelleher and earned the right to challenge for the vacant Cage Fury Fighting Championships featherweight strap. Lentz appeared on Season 12 of “The Ultimate Fighter” reality series, submitting to an Alex Caceres triangle choke in the Round of 16. The 24-year-old Kurt Pellegrino protégé has not competed in MMA in nearly two years.

Gaudy records tend to draw attention. At 24-0, Laurentino has delivered 21 finishes, 18 of them inside one round. The hype surrounding the 21-year-old Renovacao Fight Team prospects comes with the usual disclaimers, as his level of competition leaves something to be desired. Laurentino recently agreed to terms on a contract with Titan Fighting Championship, but before he debuts on American soil, he faces a rematch against a man he knocked out in just 30 seconds in August. Fernandes last fought under the Red Mission Cup banner in January, when he submitted to a first-round heel hook from Wagner Noronha.

Former One Fighting Championship titleholder Kim returns to the Road Fighting Championship promotion for the first time in nearly two years. The 22-year-old Korean remains an intriguing prospect on the Asian MMA scene. Kim last competed at One FC 11 in October, when he surrendered his bantamweight crown in a five-round decision defeat to Bibiano Fernandes. A Pancrase mainstay, Tezuka made a brief and unsuccessful stop in the UFC, losing to Alex Caceres and Vaughan Lee before being released. The durable grinder has only been finished three times in his 31-fight career.

To say Page has hit the skids would be a major understatement. Once regarded as one of the world’s top 10 bantamweights, the Jackson’s Mixed Martial Arts representative has gone 1-5 since besting Marcos Galvao and Will Campuzano in back-to-back World Extreme Cagefighting appearances in 2009. Page, 31, last appeared in September, when he wound up on the wrong side of a split decision against Marcelo Costa at a Strength and Honor Championship event in Switzerland. Lozano dipped his toes in Legacy Fighting Championship waters for the first time in October, needing a little more than a minute to submit Klayton Mai with an inverted triangle choke. A semifinalist on Season 1 of “The Ultimate Fighter: Brazil,” Pancini appeared to be on the fast track after his UFC 147 victory over Wagner Campos moved his record to 20-3-1 and resulted in his being awarded a $65,000 “Knockout of the Night” bonus. However, consecutive losses to Johnny Bedford and Ali Bagautinov led to his UFC release. Pancini returned to the regional circuit under the Rebel Fighting Championship banner in December, only to be victimized in a first-round knockout against Taiyo Nakahara. Dos Santos, 28, will enter the matchup on a six-fight winning streak, having finished his last four opponents.

Two undefeated prospects answer the bell for the vacant Made 4 The Cage European welterweight championship. Gahadza, a Zimbabwe native who relocated to England as a teenager, has compiled a perfect 13-0 record, with 11 wins by knockout, technical knockout or submission. The 26-year-old made his promotional debut at Made 4 The Cage 11 in August, earning a unanimous decision over Alan Johnston. Scope, meanwhile, has finished six of his first seven foes, five of them within one round. He has not competed since March, when he submitted Luke Newman with a triangle choke inside the British Association of Mixed Martial Arts organization.

Magalhaes started his career with a stellar 11-1 record, earning his golden ticket to the Ultimate Fighting Championship. However, the 32-year-old Brazilian jiu-jitsu black belt was jettisoned after a two-fight stint inside the Octagon produced disappointing decision defeats to Tim Means and Henry Martinez. Magalhaes has not competed since September 2012, when the Brazilian-born Australian stopped Sonny Brown on first-round punches at a Proud Warrior Productions event. Patterson, 30, has rattled off eight wins in 10 outings, including a rear-naked choke submission against Rod Staader at AFC 7 in December.

A former Shooto Pacific Rim 132-pound champion, Sasaki has surfaced as one of Japan’s top prospects. Unbeaten in his last nine appearances (8-0-1), the 24-year-old submitted Keisuke Fujiwara with a rear-naked choke at a Shooto event in January. Sasaki has finished three consecutive opponents in the first round, including an 11-second knockout against Kenji Yamamoto. The once-beaten Ishihara, 22, last fought at Vale Tudo Japan 2nd in June, when he knocked out Koji Mori in a little more than two minutes.

Brazilian Top Team’s Santos has been on an upward trajectory since 2009, taking 14 victories in 15 appearances and capturing the Bitteti Combat featherweight crown. The Murilo Bustamante disciple ran his current winning streak to seven fights in July, when he earned a unanimous decision over Evandro Oliveira at a Smash Fight show in Brazil. Just 25 years of age, Santos will enter his Titan Fighting Championship debut with 29 professional bouts under his belt. Hackney, a Bellator alum, has lost two of his past three fights.