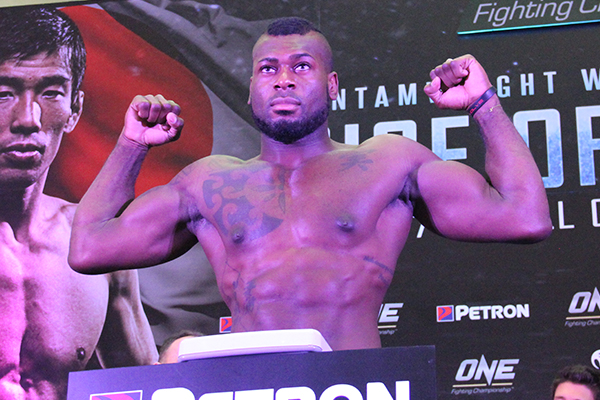 Unbeaten Leandro Ataides is out for One FC gold on Nov. 7 in Singapore. | Photo: James Goyder/Sherdog.com

One more obstacle stands between Leandro Ataides and the hardware he desires.

The undefeated Evolve MMA prospect will face Igor Svirid for the vacant One Fighting Championship middleweight title in the One FC 22 “Battle of Lions” headliner on Nov. 7 at Singapore Indoor Stadium in Kallang, Singapore. The winner will join Ben Askren, Shinya Aoki, Jadamba Narantungalag, Bibiano Fernandes and Adriano Moraes as the latest One FC champion.

Ataides has been nothing short of frightening since touching down in One Fighting Championship. The 28-year-old Brazilian has posted back-to-back knockouts, including a 47-second stoppage on 2010 Dream light heavyweight grand prix finalist Tatsuya Mizuno in May. None of Ataides’ previous four opponents have survived the first round.

Meanwhile, Svirid has rattled off nine straight wins since submitting to punches from Kwi Hyun Joo in his 2011 professional debut. The 28-year-old Kazakhstani middleweight last appeared in June, when he forced a tapout from Ramzan Algeriev at an Absolute Championship Berkut show in Russia.

The Ataides-Svirid title clash is but one under-the-radar matchup worth monitoring during the month of November. Here are nine more:

The unbeaten Webb will defend his Cage Fury Fighting Championships welterweight title against Good, a former Bellator champion whom many view as a significant test for the promising young prospect. Based out of a Renzo Gracie Jiu-Jitsu affiliate in Philadelphia, Webb last competed at CFFC 38 in August, when he took care of Daniel Stittgen with third-round punches. He has secured five of his seven professional victories by knockout, technical knockout or submission. Good, 29, has never been finished in his 19-fight career, losing only to Askren, Rick Hawn and Andrey Koreshkov.

Inoue turned 20 in August and remains one of Japan’s most prized MMA exports. Long labeled a prodigy, she has suffered only one legitimate defeat since joining the professional ranks at age 16 in October 2010. Inoue already owns victories over “The Ultimate Fighter” Season 20 cast members Bec Rawlings and Alex Chambers, and she has submitted five different opponents via armbar. Not to be overshadowed, Kowalkiewicz has won all five of her fights, the 29-year-old Pole having spent much of her career inside Poland’s KSW organization.

Any prospect flying the Team Alpha Male flag figures to draw attention. Such is the case with Sandoval. The 28-year-old has pieced together an eight-fight winning streak since submitting to a Ulysses Gomez armbar in his professional debut six years ago and will carry that momentum into his latest appearance, as he puts the Tachi Palace Fights flyweight title on the line against Perez. Sandoval has not fought since taking a five-round unanimous decision from Legacy Fighting Championship veteran Ryan Hollis in August. Perez, 22, will also hit the cage on the strength of eight straight victories.

The Resurrection Fighting Alliance’s vacant bantamweight belt will be up for grabs when the undefeated Sanders and the once-beaten Mercado collide in the Denver suburbs. Sanders, 28, has spent time training at the MMA Lab in Arizona, where he sharpened his skills under renowned trainer John Crouch -- the same man who gave rise to former World Extreme Cagefighting and UFC lightweight champion Benson Henderson. Mercado, a 29-year-old Elevation Fight Team representative, heads into the most important fight of his career on the heels of back-to-back victories over Josh Huber and Daniel Swain.

Inarguably the most-talked-about young heavyweight on the planet, Tybura has finished his past six opponents -- a run of dominance that includes an 88-second technical submission against the experienced and highly regarded Damian Grabowski that brought with it M-1 Global gold. The unbeaten 28-year-old Pole will defend his heavyweight crown for the first time against Smoldarev, a massive 24-year-old who has been called the “Brock Lesnar of Estonia.” The 6-foot-7 Smoldarev needed just 38 seconds to submit Yuriy Kyselov with an armbar in September.

Mendes’ lineage speaks for itself. The 31-year-old holds the rank of black belt in Brazilian jiu-jitsu under Francisco Mansor, a protégé of the late Helio Gracie. A two-time Brazilian jiu-jitsu world champion, Mendes operates out of the MMA Lab and transitioned to mixed martial arts in 2013. “Tanquinho” has since submitted his first two professional opponents via armbar. He signed with the Legacy Fighting Championship organization in August. Viana, 24, has put away all seven of his foes, the past six of them inside one round. He last appeared under the Monster Combat banner in his native Brazil on May 24, when he tapped Paulo Medina with a rear-naked choke.

Duffy’s claim to fame: He was the last man to defeat current UFC featherweight contender Conor McGregor, having put away the “Notorious” Irishman with an arm-triangle choke in November 2010. The talented 26-year-old rebounded from his first professional defeat -- a fourth-round guillotine choke submission against Ivan Musardo in a bout for the vacant Cage Warriors Fighting Championship lightweight title three years ago -- with a nifty third-round stoppage on Damien Lapilus in August. Duffy also holds a victory over “The Ultimate Fighter: The Smashes” winner Norman Parke. Boussuge, 33, will enter the cage on a three-fight winning streak. The three men to whom the Frenchman has lost -- Mansour Barnaoui, Johnny Frachey and Mairbek Taisumov -- own a cumulative 49-16 record.

A Pancrase Gym product, Albrektsson seeks to follow in the footsteps of fellow Swede and onetime UFC light heavyweight title challenger Alexander Gustafsson. The 21-year-old has smashed through three straight opponents since debuting in 2012, establishing himself as one of Scandinavia’s top prospects. Albrektsson has not fought since April, when he knocked out Nordine Hadjar in the first round of their clash inside the International Ring Fight Arena promotion. Janiszewski, 33, is 3-1 over his past four appearances.

Hansen remains a figure of interest on the global scene despite the fact that, at 35, his prime years are now in the rearview mirror. The former Shooto and Dream champion will attempt to rebound from a 15-second knockout loss to Doo-Won Seo at Road Fighting Championship 15 in May. “Hellboy” holds victories over Takanori Gomi, Yves Edwards, Caol Uno, Masakazu Imanari and Mitsuhiro Ishida, among others, but the Norwegian star has not posted back-to-back wins in more than three years. Nunes, a WEC, UFC and Bellator alum, has lost three fights in a row.