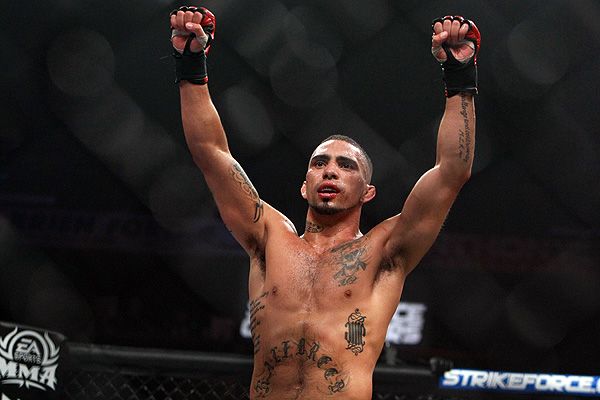 Caros Fodor was a combined 5-2 in Strikeforce and the UFC. | Photo: Dave Mandel/Sherdog.com


This list does not focus on the well-promoted main event bouts from major organizations you already know to watch, but rather on fights from all over the planet that are worth seeing. Ultimate Fighting Championship, Bellator MMA and World Series of Fighting cards are excluded by design ...

Caros Fodor became a surprising victim on the UFC chopping block, as he was released by the promotion after just one appearance. Now begins his long road back to the Octagon.

Fodor will look to put an end to the first two-fight losing streak of his career in his One Fighting Championship debut, as he confronts the unbeaten Seung Ho Yang as part of the One FC 10 “Kojima vs. Leone” prelims on Sept. 13 in Jakarta, Indonesia. The event’s undercard will stream live and free to Sherdog.com at 7:30 a.m. ET/4:30 a.m. PT.

Anchored at AMC Pankration in Kirkland, Wash., Fodor trains under the watchful eye of respected MMA coach Matt Hume. The 29-year-old became a person of interest inside Strikeforce, where he rattled off five consecutive victories, including a 13-second knockout against the American Kickboxing Academy’s Justin Wilcox. However, a submission defeat to Pat Healy slowed his rise and sent him into the UFC with diminished momentum. Fodor last appeared at UFC 157 in February, when he dropped a split verdict to Sam Stout at the Honda Center in Anaheim, Calif.

Yang has competed sporadically since he debuted in Pancrase as a teenager in 2007. The 23-year-old South Korean prospect last fought at a Gladiator Fighting Championship show six months ago, as he submitted Waleed Trabolse with a first-round rear-naked choke at the Crown Plaza Hotel in Kuwait City, Kuwait. It was Yang’s first appearance in nearly three years.

The Fodor-Yang scrap is but one under-the-radar matchup worth monitoring during the month of September. Here are nine more:

One has to wonder when Father Time will catch up to Vila, who turns 43 in March. A decorated amateur wrestler, the American Top Team representative struck gold at the 1996 Summer Olympics in Atlanta. Vila transitioned to MMA in 2007 and put together a string of 11 straight wins to start his career, including a vicious 64-second knockout against Joe Warren and a split decision over Marcos Galvao in Bellator. Some turbulence has followed, with Vila losing three of his past four bouts. All six of Cruz’s fights, five wins and a loss, have resulted in first- or second-round stoppages.

Part one of the “Bad Boy” Garcia reclamation project was a success. The 34-year-old Jackson’s Mixed Martial Arts representative threw the brakes on a five-fight losing streak in his first Legacy Fighting Championship appearance in July, as he knocked out Rey Trujillo with a third-round head kick and follow-up punches. It was Garcia’s first non-decision victory since he ran through former UFC lightweight champion Jens Pulver in 72 seconds nearly five years ago. Gonzalez, a 32-year-old Strikeforce veteran, has not recorded back-to-back wins since 2007.

Fairly or unfairly, Assuncao operates in the growing shadow of a younger brother who has clawed his way to a world ranking at 135 pounds. The 32-year-old Brazilian jiu-jitsu black belt has twice received his walking papers from the UFC, having posted a 2-3 mark inside the Octagon. Assuncao has not fought since UFC 141 in December 2011, when he wound up on the wrong side of a unanimous decision to “The Ultimate Fighter” Season 9 winner Ross Pearson. In the wake of that defeat, he heads back to his native Brazil for a showdown with de Souza, a 21-year-old prospect on a six-fight winning streak. An undefeated Swedish prospect, Nunes aims to take the next step in his development, as he faces Golden Glory’s Jones for the British Association of Mixed Martial Arts light heavyweight crown. The 24-year-old Nunes has finished all 11 of his opponents, six by KO or TKO and five more by submission. He last fought at a Global Warrior Challenge event in Kansas City, Mo., where he mopped up Justin Davis with first-round punches on June 29. Jones, meanwhile, saw his four-fight winning streak snapped at Final Fight Championship 4 in May, when he was knocked out by Maciej Browarski in Croatia.

Victories over Scott Jorgensen, Will Campuzano and Marcos Galvao -- the latter is remembered as one of the most violent finishes in World Extreme Cagefighting history -- afforded Page a seat at the table for the bantamweight elite not so long ago. However, the Jackson’s Mixed Martial Arts veteran hit the skids with four consecutive submission losses to Demetrious Johnson, Brian Bowles, Brad Pickett and Alex Caceres, resulting in his being jettisoned from the Zuffa stable. Having returned to the winner’s circle in May, Page has fixed his attention to the 34-year-old Costa, who has lost but once in his last nine appearances.

Kuivanen will put his Cage lightweight crown on the line against Reynolds, a well-traveled Bellator veteran who has yet to get over the hump against top-flight competition. The 29-year-old Kuivanen did not let his UFC release discourage his personal progress, as he defended his 155-pound title with a unanimous decision over Jason Pierce in May and remained undefeated in seven outings inside the Cage promotion. Reynolds has delivered 15 of his 17 victories by KO, TKO or submission, but he has fallen short in bouts with Eddie Alvarez, Jorge Masvidal and Nick Newell.

Based on bloodlines alone, Pettis has become a must-follow on the regional circuit. The 20-year-old younger brother of reigning UFC lightweight champion Anthony Pettis, he has emerged as one of MMA’s most promising flyweight prospects. Unbeaten in six professional outings, “The Phenom” has already delivered five finishes, four of them inside one round. Pettis has not fought since June, when he needed all of 51 seconds to put away Dillard Pegg with punches at a Resurrection Fighting Alliance event. Porter, 20, has won five of his first six bouts, a September 2012 submission loss to Carson Beebe the lone hiccup.

Jewtuszko burst onto the global stage with a dazzling WEC debut in 2010, scoring a 95-second technical knockout against Anthony Njokuani at WEC 50. However, a disappointing decision defeat to Curt Warburton at UFC 127 and even more below-par effort in a 46-second knockout loss to Artur Sowinski in KSW dimmed what seemed to be a bright future in the sport for the 32-year-old Pole. Jewtuszko has since righted his ship, wiping out Dean Amasinger with punches and avenging his loss to Sowinski with a second-round brabo choke. A finalist on Season 9 of “The Ultimate Fighter,” Winner has posted a 3-1 mark since being released by the UFC in 2011.

Lopez arrived in the UFC in 2011 as the heralded once-beaten protégé of Brazilian legend Wanderlei Silva, but decision losses to Justin Edwards and “The Ultimate Fighter” Season 7 winner Amir Sadollah knocked some shine off his star. Still only 24, Lopez will now look to reclaim some of the hype that once made him one of the sport’s more-talked-about prospects. In his return to the regional MMA scene, the he Wand Fight Team standout will confront Melendez, a journeyman who has struggled to a 7-10 record since appearing on Season 5 of “The Ultimate Fighter.”