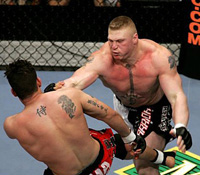 Photo by Sherdog.com
The UFC knew Lesnar was for real.
What was your initial reaction when you were approached by Brock Lesnar? Were you a little hesitant that it was for real or not?

Fertitta: I’ve got to give props to Dana White on that one, man. He called me up one day and said, “You know what? I want to get Brock Lesnar.” I had watched Brock when he fought in the (Los Angeles) Coliseum (for K-1) and I was really impressed with his athleticism. I could tell it was no joke. And the other thing we looked at, is we said, “This guy is a world-class athlete.” It’s not like that’s some made-up thing… we said we might take some hits here or there because he’s a pro wrestler, but we believed in his abilities and just the sheer size, power, and strength. We sat down and talked to him and this guy’s the real deal. The other thing is, I had heard through a few guys at the Miletich camp, where he’d gone down and trained, and they said, “Let me tell you what. This guy is no joke. If he focuses, he could be the heavyweight champion.”


Advertisement
There’s a lot of great superfights out there, but teammates refuse to fight teammates, such as Anderson Silva vs. Lyoto Machida. What’s the UFC’s opinion about teammate vs. teammate fights?

What about Dublin (Ireland)?

Fertitta: We will be back in Dublin next year on St. Patty’s Day.

I live in Vancouver (British Columbia, Canada). When are you coming?

Fertitta: Vancouver is actually somewhere where we’ve made a lot of progress, and we’ve actually penciled in our June pay-per-view for Vancouver of next year.

What’s your opinion of the ten-point must system?

Fertitta: I’m comfortable with the ten-point must system. It is different than boxing, as far as how you score on a ten-point must. It can get a little bit tricky and some of the fights are just close… I don’t know of a better system. I think what we need to do is continue to run seminars for the officials, teach them about what to look for in mixed martial arts.

Is their any type of HMO or PPO healthcare plan you can offer the fighters for injuries they sustain outside the fights?

Fertitta: From an insurance standpoint, all of the fighters are covered that fight in the show. We carry more coverage than we’re told to from the state… Go to the insurance company and tell them you want to cover 300 ultimate fighters for everything they do in life. If we can figure it out, I’m in. We just haven’t been able to get a carrier that will do it. So, what do we do? We don’t advertise or publicize this, but we pay for tons of surgeries: guys blowing out their knees in training, guys getting hurt, breaking their hands. The guys that are on our team, that are part of our family, we fix all that stuff.
Latest News
ALLUFCBELLATORPFLONE