The UFC on Dec. 15 made official its plans to return to Brazil for the first time in more than a decade. UFC President Dana White highlighted hall of famer Royce Gracie, as the promotion began its push for UFC “Rio” on Aug. 27 at the HSBC Arena in Rio de Janeiro, Brazil.

In this exclusive interview with Sherdog.com, given after the press conference announcing the event, Gracie discusses a potential return to the UFC, the evolution of the sport and the modern-day fighters he respects most.

Sherdog.com: What does the UFC’s return to Brazil mean for you, your family and especially your father, who is not here to see it?
Gracie: Here was where it all began. Seventy-five years ago, my father had created this kind of event find out the best fighter and the best fighting style. For years, my family has proven that Gracie jiu-jitsu is the best style of self-defense to defend in the streets. We came out here for some time, went to America and came back. We realize that the birthplace of the business is here, the heart of where it all began. That’s why guys are so damn excited to bring the event back here.

Sherdog.com: Do you think the world today gives the Gracie family and your father the recognition they deserve for the important role they have played in MMA history?
Gracie: The staff of the UFC does completely, no doubt about that, so they want to bring the event here. Without Gracie jiu-jitsu and the Gracie family, there wouldn’t be the UFC. They know of this connection, so they want to bring the event back here. We talked yesterday, and they said my family was the reason they are bringing it here: ‘What your father created and what you did in the ring is the reason we’re bringing the event back to Brazil.’ They are with a sport that is growing worldwide, so they want to give back what they earned with our family. 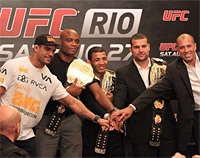 File Photo
UFC "Rio" news conference
Sherdog.com: I know you’re touring the world giving seminars, but are you still training?
Gracie: Always. I live of it. I’m at the same weight I was at UFC 1, and this is 18 years later. I’m never overweight or needing to lose weight. I’m always at 80 kilograms (176 pounds). It’s my normal weight, and I always fight at 78 kilograms (171.6 pounds) or 80 kilograms.

Sherdog.com: How do you see MMA today compared with your time?
Gracie: Everyone else has to prepare. The athletes have to learn to fight standing, ground fighting and jiu-jitsu. They have to know how to deliver a strategy and form a strategy for fighting. Being brave is not only
about entering the ring to exchange punches.

Sherdog.com: Within this new philosophy, who is your favorite fighter?
Gracie: The guys who are the best are the guys that can deliver a strategy. It’s [Georges] St. Pierre, Anderson Silva, [Mauricio] “Shogun” [Rua], Lyoto Machida, Cain Velasquez. These are the guys who are always delivering a good strategy. B.J. Penn is also another who knows how to use strategy.

Sherdog.com: Can we expect Royce Gracie to fight in Brazil?
Gracie: We are negotiating (laughs).

Sherdog.com: How old are you?
Gracie: I am 44 years old. My father fought his last fight at 53, so that wouldn’t be a problem.