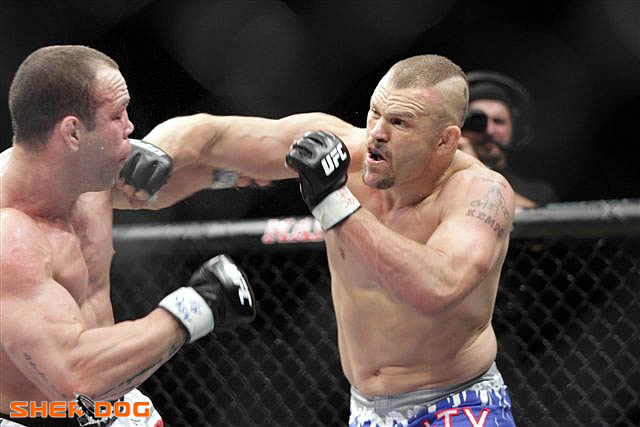 Chuck Liddell was a purveyor of blunt-force trauma. | Photo: Sherdog.com

CASE FOR: No fighter has embodied MMA quite like “The Iceman” did in his heyday. Not only was Liddell the anchor in the first UFC pay-per-view to break the million-buy mark, but his Mohawk and painted toenails became synonymous with the sport, reaching a previously untapped audience of casual fans. He was a sprawl-and-brawler at its most dynamic, tallying a record seven straight knockout and TKO wins en route to winning and defending the UFC title four times. With an uncanny ability to stay upright and an even more lethal habit of finding his opponents’ chins, Liddell built an aura of invincibility and a reputation as one of the most exciting athletes the sport has ever had to offer. Still one of the most recognizable and beloved characters in MMA, it is hard not to give Liddell the nod as the Greatest of All-Time.

CASE AGAINST: Bonus points are always awarded for being exciting, but unfortunately for “The Iceman,” his entertainment value is not enough extra credit to supplant his career shortcomings. First and foremost, his tendency to either knock out or be knocked out resulted in a dramatically high percentage of getting finished by his opponents -- the second highest on this list and generally too high to compare with the other greats on its own. On top of that, his dominance was punctuated by various rematches, dulling some of the shimmer from his title defenses. Speaking of which, you cannot really call someone who is tied for the third-best title reign the greatest, any more than you can proclaim a co-bronze medalist the true champion of an Olympic event. Liddell helped put the sport on the map, and for that, we are all grateful. However, gratitude alone will not earn you the coveted title of G.O.A.T.