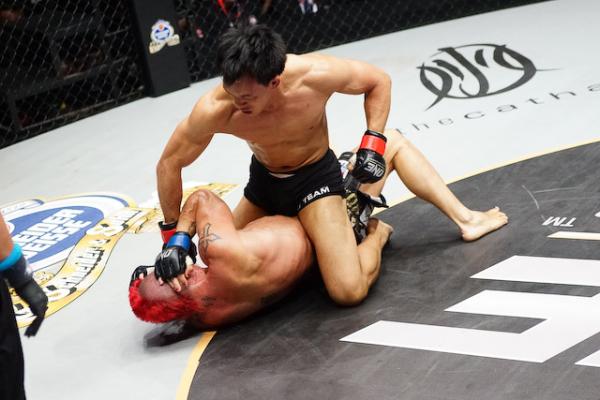 Eddie Ng has finished three of his last four foes in less than a minute. | Photo Courtesy: One FC

The 27-year-old will put his four-fight winning streak on the line when he meets Peter Davis in a One Fighting Championship lightweight showcase at One FC 11 “Total Domination” on Friday at Singapore Indoor Stadium in Kallang, Singapore. The event’s undercard will stream live and free to Sherdog.com at 7 a.m. ET/4 a.m. PT.

A promising lightweight out of the Evolve MMA camp, Ng wants to throw his name into the hat for the One Fighting Championship 155-pound title, which could soon be vacated with champion Shinya Aoki’s forthcoming move to the featherweight division. He hopes his outing against Davis will put him in position to challenge for lightweight gold, should Aoki abdicate his throne.

“Aoki is a good friend and teammate, so I will not fight him,” Ng said. “However, if the belt is vacant, I definitely want to get a shot at the title. Winning the title will be gratification that I am the best lightweight, and I want to continue to face and defeat all the top guys in the division.”

Born in Hong Kong, Ng moved to England at a young age. He claims his warrior spirit was forged in the crucible of prejudice and mistreatment.

“It was not easy for an Asian teenager growing up in England,” Ng said. “I was constantly hassled by bullies, just because I was of a different race than them. It never really escalated to physical beatings, but I was called all kinds of names, spat on and just treated differently than others. It had gotten so bad that sometimes I would take a much longer route to go home than a shorter one; and when I was home, I wished I was not Asian just so I could fit in.”

However, like many others who have been bullied, Ng found an answer to the pain and frustration in martial arts.

“Bruce Lee is a hero and inspiration of mine,” he said. “I have read numerous books on him, and he inspired me to push myself to greater heights. Bruce Lee proved that you can overcome obstacles, and he was a pioneer in mastering different martial arts.”

“
When I first started, I did not
have a teacher or mentor.
I would get my hands on an
instructional tape and just
learn from there.

Ng began his journey into martial arts by teaching himself, though he eventually sought out the skill of various masters at Evolve MMA.

“I got into martial arts by learning Brazilian jiu-jitsu through tapes,” he said. “When I first started, I did not have a teacher or mentor. I would get my hands on an instructional tape and just learn from there. I’d pull my little brother over and test some of the moves on him. I spent several years just training by myself without an instructor, but what drew me to Evolve MMA was that the academy has the largest collection of world champions at one specific location, from world champions in muay Thai, Brazilian jiu-jitsu, boxing [and] wrestling [to] MMA, submission grappling and no-gi grappling. This meant that I didn’t need to travel to various gyms to train in muay Thai, boxing or BJJ. I have learned so much from the team at Evolve.”

Like all professional fighters at Evolve MMA, Ng works as a salaried employee, taking part in his share of teaching and coaching.

“I love teaching the students, too, so I try to impart as much of my knowledge to the students,” he said. “I want to continue to build my legacy in my career, as well as in life. I am just getting started and I want to carve out a legacy that will live on even after I am gone.”

Chatri Sityodtong, founder and head coach at Evolve MMA, was the first to encourage Aoki to downshift to 145 pounds, perhaps opening the door to a lightweight title run for Ng. The 27-year-old has compiled a perfect 3-0 mark under the One FC banner, finishing Chunbo Yuan, Jian Kai Chee and Arnaud Lepont in succession.

“He is very gifted as an athlete,” Sityodtong said. “He’s explosive and fast, with excellent balance. He also possesses serious KO power. The thing that makes him extraordinary is his ability to learn and absorb new material very quickly because of his humility. His intelligence is one of the strongest aspects of his game.”

Tapping into Ng’s gifts, Sityodtong plans to send him to train at Jackson’s Mixed Martial Arts, as Evolve MMA recently formed a partnership with the famed Albuquerque, N.M., academy.

“Eddie has a ton of potential,” Sityodtong said. “Eddie is already 10 times better than when he first joined Evolve MMA, but he still has a long way to go before he hits his full potential. If he maintains his discipline, focus and humility, he has the chance of becoming a future world champion.”