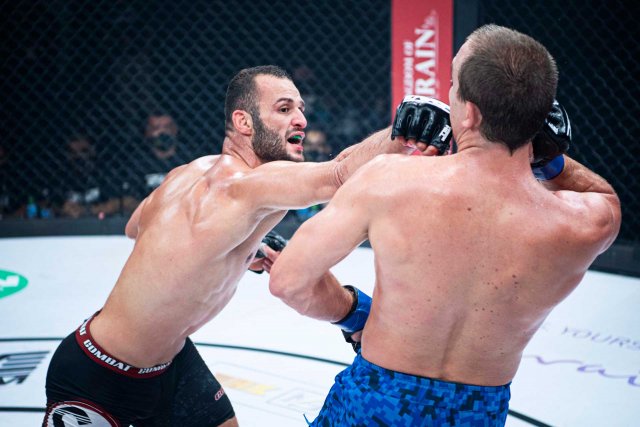 
Jarrah Al-Silawi is set to compete in Professional Fighters League next season, but fans will get a sneak preview of the “Jordanian Lion” next month at the 2021 Season PFL Championships.

A few days ago came the announcement that PFL had enrolled Al-Silawi (16-3) for its 2022 season. The 29-year-old will finally make his U.S. debut after a 9-1 run in Brave Combat Federation —recent springboard for numerous top prospects including Khamzat Chimaev and Ilia Topuria — where he captured the welterweight (175 pound) title twice. Before the next PFL season kicks off however, international fans will get a chance to see Al-Silawi’s skills, as he is scheduled to fight at the 2021 Season PFL Championships event on Oct. 27.

Al-Silawi (16-3) made his professional mixed martial arts debut in December 2013 on the preliminary card of Cage Warriors 61 in his native Jordan. The 21-year-old hometown hero spent 33 seconds showcasing what he is made of at the expense of James Burrows. After blocking a head kick, the Al Tamari Team representative fired a left body kick — one of his favorite moves — and waited for his opponent to lower his guard, then punished him with a left hook that dropped him. A follow-up few hammer fists by Al-Silawi left the Welshman unconscious, marking the end of his career.

In his second fight, Al-Silawi experienced the bitter taste of a KO defeat at the hands of Carl Booth. That loss gave rise to one of the three bitter rivalries Al-Silawi has had in his career. The Jordanian evened the score with “The Bomber” three years later, upending the Englishman by unanimous decision at Brave CF 9. However, the conflict with Booth is nothing compared with the one the Jordanian star had with another marquee name from the Middle East, Mohammad Fakhreddine. The first time they met, Al-Silawi submitted “The Latest” via second-round kimura at Desert Force 15. The Lebanese asked for and obtained a rematch with the promotional interim welterweight title on the line at Desert Force 20, where after a grinding battle, Fakhreddine edged out his rival in a narrow split decision.

Al-Silawi signed with Brave a couple of victories after the Fakhreddine defeat, marking his first appearance in the Bahraini promotion by tapping Erik Carlsson with a second-round kimura at Brave CF 2. He fought there for five more years, scoring nine wins under Brave’s banner, a promotional record. He also shares the Brave CF record for most fights with current One Championship contender Jeremy Pacatiw, becoming the second athlete to reach double-digit appearances and holding the record of most cage time with 131 minutes, 46 seconds.

Since the loss to Fakhreddine in January 2016, Al-Silawi has won 11 of his last 12 fights, with the lone defeat coming at the hands of another rival, Abdoul Abdouraguimov. The pair met for the first time at Brave CF 23 in April 2019, with “The Jordanian Lion” looking for his first title defense after winning the vacant belt with a stoppage of Ultimate Fighting Championship welterweight contender Carlston Harris. Al-Silawi and the Frenchman battled for five intense rounds, with Abdouraguimov imposing his grappling skills as the Jordanian retaliated with hard shots on the feet. When it came to hear the cageside judges' decision, “The Lazy King” took home a controversial split decision victory.

Al-Silawi campaigned for a rematch that went down six months later at Brave CF 27. The contestants opted not to touch gloves before Al-Silawi reached his opponent with a right hand 15 seconds into the fight, knocking him down. Abdouraguimov resorted to a skillful trick that swept his opponent and drove him to engage in grappling exchanges before getting back on his feet. Al-Silawi spent the rest of the round measuring his opponent with his jab and avoiding getting too close. In the second frame, Al-Silawi attacked from afar with jabs and calf kicks, while shutting down all his opponent’s takedown attempts. He even attempted a bulldog choke, hoping to avenge his split decision loss by inducing his opponent to tap. While the Jordanian failed to deliver a submission, he kept on pouring constant pressure and displayed outstanding takedown defense in the third stanza. The final minute in Round 3 was all about “The Jordanian Lion,” who bombarded Abdouraguimov with punches and body kicks until he dropped his opponent as the referee was watching closely. The bell saved the Frenchman from further punishment, but Abdouraguimov decided to quit the fight during the break, making Al-Silawi became the first man to finish him.

In his next fight, Al-Silawi moved to middleweight to meet Melvin van Suijdam. He outpointed van Sujiadam with ease before calling for a third match with Fakhreddine, who had signed with Brave CF soon after Al-Silawi and gone on to win the middleweight title. The trilogy never came about, and Al-Silawi’s latest cage appearance was in the Brave CF 50 headliner, where he finally notched his first title defense at the expense of UFC alum Ismail Naurdiev. Al-Silawi picked apart the lead leg of “The Austrian Wonderboy” until Naurdiev collapsed, clutching the affected limb 79 seconds into the second round. So far, the combined record of all his opponents features 167 victories and 72 defeats. Al-Silawi will soon have the chance to add a few more to that.