UFC welterweight contender Dan Hardy pauses for a moment. The synonymous red Mohawk is overgrown and pasted across his forehead. His mind races back over seven years of stories before settling.

“Jimmy [Wallhead] got caught in an arm triangle once against Peter Angerer,” he says. “Peter Angerer was on the bottom, and Jimmy was stuck on his arm, so he couldn’t tap. He ended up having to tap with his feet, so we gave him the nickname Scuba Steve. We still get him with that one.”

Hardy breaks into a grin as Wallhead passes.

“You know who Scuba Steve is don’t you, Jimmy?” he asks.

Wallhead, a powerfully built welterweight with shorn bleached hair, shakes his head and stops. He shoots a knowing glare at Hardy before feigning a choke and cradling his stomach. Hardy knows immediately what he means.

“Jimmy’s talking about the time I got caught in a guillotine and s--t myself,” Hardy says. “It was in my second fight with Alexandre Izidro. I had no idea until after the fight. After about three minutes of the first round, I got caught in a guillotine for 26 seconds, and, at some point, I must have passed out. I came to and managed to squeeze my way out of it. I ended up fighting the rest of the fight and TKOing him at the end of the third.”

Almost any literature one reads regarding Team Rough House focuses on the intense camaraderie that binds the camp. Just moments before the pair traded embarrassing stories, Hardy and Wallhead engaged in a series of intense sparring rounds, with Wallhead relentless in his pursuit of the takedown and Hardy pinpoint and elusive with his striking. This potent combination of amity and competition between the fighters has propelled the team to recent success.

“Camp’s hard,” says Wallhead, in the early stages of his preparation for the forthcoming Bellator Fighting Championships welterweight tournament. “Fighting’s the fun part. Training’s horrible; you’re dieting, and you’re working out three times a day. You don’t want to do it, but having these guys around adds that competitiveness, as well. I never want Dan to beat me; Dan doesn’t want me to beat him. It’s not animosity, but we strive to push each other to the limits. We’re like a family. It’s a great support network, like a band of brothers.”

Andre Winner, an exciting lightweight prospect and finalist on “The Ultimate Fighter” Season 9, echoes the familial sentiment. He cites the shared experiences of the team as an important factor in the friendships that exist.

“We all come from similar sporting backgrounds and things like that, which adds a kind of unity,” Winner says. “We all had our troubles in the past and we’re all similar ages, which binds us all together and helps. We’re not just a team that turns up and gets together to train once or twice a day. Any of these guys could ring me at any time of the night and say, ‘Dre, I need your help.’ I’ll always be there for my team.”

Rough House clings to such ideals. Time is allocated primarily between the Liberty gym in Nottingham, England, for sparring, Leicester Shootfighters for grappling and the Leicester Tigers Rugby Club facility for conditioning. Often, fighters employ personal coaches to best suit their needs. They are a collective body bonded by common goals and fellowship, rather than a building or trainer. It has been that way from the very first meeting between Hardy and fellow world-ranked welterweight Paul Daley.

“I was fighting in amateur KSBO tournaments back in 2002-2003,” Hardy says. “We used to go to Nottingham University in the sports hall, and I remember, at those first few tournaments, I’d always see Paul Daley and Matt Howell there with their Rough House T-Shirts on. We got talking and got on really well.

“I had a disagreement with the guy I was training with at the time, so I decided to start working with Paul,” he adds. “Matt had university commitments, so it ended up being just me and Paul. When Paul started fighting professionally, I was his main training partner, and then I started fighting professionally, as well. We just sort of pick guys up along the way. A lot of guys have gravitated to us, and we’ve built a team just from working hard basically.”

While the initial premise of the team remains, facilities and organization have improved exponentially since that initial meeting between Daley and Hardy. Winner, a member of the team since 2004, has witnessed the growth firsthand. 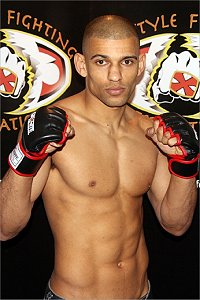 Jim Page/Sherdog.com
Rough House's Andre Winner.
“When we first got here, we were just like two, three guys booking up at the gym and training together, no real game plan to what we were doing, but now we’ve got a team,” Winner says. “We still train at a lot of different gyms, but we’re a lot more organized now. It’s come along with facilities and everything like that. We’ve still got loads to go, though. Hopefully, we’ll have a Rough House franchise one day.”

Currently, there appears to be a highly organic process to the introduction of new members. Chance encounters with unharnessed potential surround most stories of inclusion. “The Ultimate Fighter” Season 9 contestant and recent Ultimate Challenge MMA title contender Dean Amasinger joined Rough House following a curtailed stint in amateur rugby, encouraged to take up mixed martial arts after meeting Daley and Hardy at Nottingham University. Wallhead was first introduced to Hardy in the bathroom of a venue following his second MMA loss, and Winner decided to join the team after witnessing sessions between Daley and Hardy while enrolled in a weekly self defense class at Leicester Shootfighters.

The results of the team have been incredible. Strengthened by the addition of TUF 9 alum Nick Osipczak and eventual lightweight winner Ross Pearson, the team has established a record of 11-1 inside the UFC; the lone loss came in a bout contested between Pearson and Winner in the lightweight final at “The Ultimate Fighter 9” Finale. Rough House has so far proven adept at transforming domestic prospects into international contenders, something sure to be tested in the coming months, with a number of high-profile matches slated for its members.

Hardy will become the first British fighter to challenge for a UFC title on March 27, when he squares off against Georges St. Pierre for the welterweight crown. Daley has been booked for a May 8 date with perennial welterweight contender Josh Koscheck at UFC 113. Meanwhile, Pearson and Winner are due another incremental increase in the caliber of their opposition on March 31, when they take on Dennis Siver and Cole Miller, respectively, at UFC Fight Night 21. And Nick Osipczak will travel to the United Arab Emirates for UFC 112 on April 10 to face Rick Story.

The plethora of talent pervading the camp is made all the more impressive and beneficial to the team when one considers that the majority of fighters involved currently occupy places of prominence in the 155- and 170-pound divisions. Hardy intends to make full use of that asset in preparation for his upcoming fight.

“Having so many top fighters in lower weight classes makes it easier to prepare for whoever we’ve got. It’s very difficult to go to another gym and to be treated like a training partner,” says Hardy, in the midst of an extended 14-week camp for the St. Pierre fight at UFC 111. “At the end of the day, it’s an individual sport, and you’re going to go to a gym and work with somebody that you’re in competition with. I know here I’m safe with these guys; they'll look after me, and they’ll push me.

“With the guys we’ve got in the team, we can piece together any skill set,” he adds. “We can all apply our skills directly to suit whatever opponent we’re fighting. Obviously, my next opponent is Georges St. Pierre, so I’ll have to bring in a couple of different guys, but I’ve managed to piece his skill set together with guys I’ve got around me, which is going to help me and make training sessions miserable.”

The dichotomy of having so many elite fighters in few weight classes, however, comes when team members converge at the pinnacle of a division and are called to fight one another. It is a request that will undoubtedly face Hardy and Daley, should they emerge unscathed from their next fights. Hardy, however, remains steadfast in his response.

“This feels like home, and the Rough House team is my family,” he says. “There’s a lot to be said for the time we’ve invested in one another. I’ve traveled with all the guys and cornered them, and they’ve done the same for me. There’s just no need for me to fight Paul. There are so many guys out there. The [American Kickboxing Academy] guys have managed to not fight each other up until this point; I don’t see why myself and Paul would ever have to fight. I have no desire to fight him, and I know he feels the same.

“Andre and Ross fought because they had no choice. It had to be done, but some things are more important than holding a belt,” he adds, his face straight and his eyes earnest as he pauses once more. “Not many, but some.”