Cole Escovedo knows a lot about second chances. Two years ago, the former WEC champion woke up in his bed and couldn’t feel his legs.

A staph infection, along with a string of medical complications that followed it, ravaged the athlete’s body and risked him permanent paralysis. The experience, at one point life-threatening, hasn’t deterred the fighter, however.

Escovedo returns to the cage this Friday in a 135-pound preliminary bout against undefeated Michael MacDonald at the Palace Fighting Championships in Lemoore, Calif.

It has been a fight just to get there -- physicians said the 27-year-old would be lucky just to walk properly again, let alone step back into the ring.

Escovedo first noticed a red pimply bump on his left forearm a few months after his last fight –- a loss to the John Hackleman-trained Antonio Banuelos at WEC 23 in August 2006. Escovedo dismissed the mark as a spider bite or an in-grown hair.

“It just kept getting worse though,” Escovedo recalls. “The skin would stay bunched up there. When I started to lose strength, then feeling in my left arm, I knew it had to be something.”

Escovedo wasn’t the first fighter to be diagnosed with a staph infection, though his story that followed is surely an exceptional one. The wound was lanced and Escovedo was given antibiotics. The infection, thought to have gone dormant, instead spread to the small of his back and started to work its way up his spine.

“I thought my legs fell asleep, so I kind of laid there wondering what the hell was going on,” says Escovedo. “I really started to panic when I was really straining to move them and they wouldn’t budge.”

Escovedo had already been to the hospital less than a month before for his unexplained back pain and loss of bladder control. Now his mother and brother rushed him back into the Clovis Community Hospital’s emergency room in central California.

The fighter’s mother was livid when doctors offered her son nothing more than painkillers and a wheelchair, then sent him home again without any further tests, he says.

Without a catheter put in place, Escovedo’s bladder quickly engorged.

“The kind of pain I was in with my spine was really bad,” says Escovedo. “I’ve had my eye socket and hand broken in a fight, but I never felt anything like that before. The pain in my back was unbearable.” 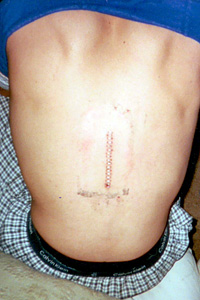 Photo Courtesy: Cole Escovedo
Escovedo has a large
scar as a reminder.
Back in the hospital again, this time the Escovedos refused to leave until additional tests were done. The fighter was soon in an ambulance racing to another nearby hospital in Fresno after the Clovis facility called for a second opinion, he says. Escovedo says he’s since filed a malpractice suit with the Clovis hospital.

Exhausted from being up for nearly 48 hours straight, a drugged and groggy Escovedo gave the go-ahead for exploratory surgery around his spine, knowing that one misstep could cause irreversible paralysis.

“The good thing was that once I woke up from the surgery, I could feel my toes,” he says.

Even if the surgery corrected his ailment, Escovedo’s neurosurgeon told him not to plan on fighting ever again.

“I’m not the type of person that likes being told I can’t,” says Escovedo. “It would be one thing if I gave up and said, 'Hey, I’m done fighting. I’m gonna move onto something else.’ But this was someone telling me I didn’t get a say in it -- ‘You’re done.’”

Escovedo spent the next six weeks learning how to walk again on his own.

At a PFC event a couple of months later, Escovedo hobbled around the venue with a cane. His frail body shook like he had Parkinson’s disease, as Escovedo’s brain struggled to get messages to his legs. In that instant, even Escovedo knew that fighting again seemed like a pipedream.

“To go from being a world champion to being that, it was embarrassing to the point where maybe I didn’t want to be there,” says Escovedo. “I didn’t want people to see me like that. People would look at me and say, ‘Damn dude, you used to be a bada--. What happened? Now you’re nothing.”

In his eight appearances at the Tachi Palace, home to the WEC and now the PFC, Escovedo had become quite a draw. The lanky 5-foot-9 fighter was known just as much for his triangle-choke finishes as for his bristly attitude in the cage.

“Cole has a pretty loyal following in central California,” says Christian Printup, who hosted numerous WEC events alongside owners Reed Harris and Scott Adams before the promotion was whisked away to Las Vegas. “He's the type of guy that people like or dislike. You know, Cole's fans want to see him triangle someone unconscious, and his detractors, well, they wanna see him get knocked out. He is a very confident person, and sometimes people tend to mistake that for arrogance. I'll admit there is a fine line there, but when it comes down to it, people like to come out to see Cole fight because he's never in a bad fight.”

When it looked like past glories were just that, Escovedo says he sunk into a deep depression.

“There was a lot of drinking involved, to be honest,” he admits. “There was one point where I think I drank for a good three weeks straight.”

With his father serving a 60-year jail sentence for multiple kidnappings and rapes (Escovedo’s father was diagnosed with “schizophrenic multi-personality disorder” when Escovedo was 12), it was Escovedo’s mother who intervened.

“She’s the one who kind of pulled me out, told me to stop having a pity party and either decide to do something about fighting or move onto something else,” says Escovedo.

A year and a half ago, Escovedo mustered the strength to begin teaching jiu-jitsu and MMA classes at a local L.A. Boxing gym. Six months in, Escovedo began to eye the ring again. The success of the sport and particularly his old stomping grounds in the WEC, which had secured a broadcast deal on Versus in 2008, proved great incentive.

“A lot of things didn’t go right in training at first,” he says. “Any type of leg kick I would take, my legs would just shut down right away. Any type of cardio I did, my legs would shut down. I kind of had to train just so I could train.”

The silver lining has been that Escovedo has been forced to dedicate more time to his craft than in any other time during his career.

Escovedo has trained for MacDonald for the last 10 weeks, a schedule comparable to any top athlete in the sport today.

“My training’s all good. My weight-cutting is all teed up,” says Escovedo. “I just want to get in there and knock him around the ring.”

Printup, who kept in touch with the fighter throughout his ordeal, promised Escovedo a slot if he could get medically cleared. That promise will be fulfilled on Friday.

“I wasn't sure if he'd be able to fight again,” says Printup. “In reality, I was just more concerned for his regular quality of life -- but he was determined to fight again, to make it back to the WEC. Cole is back in there, in the ring, doing what he loves to do, what I believe he was born to do. Cole Escovedo is the epitome of a fighter.”