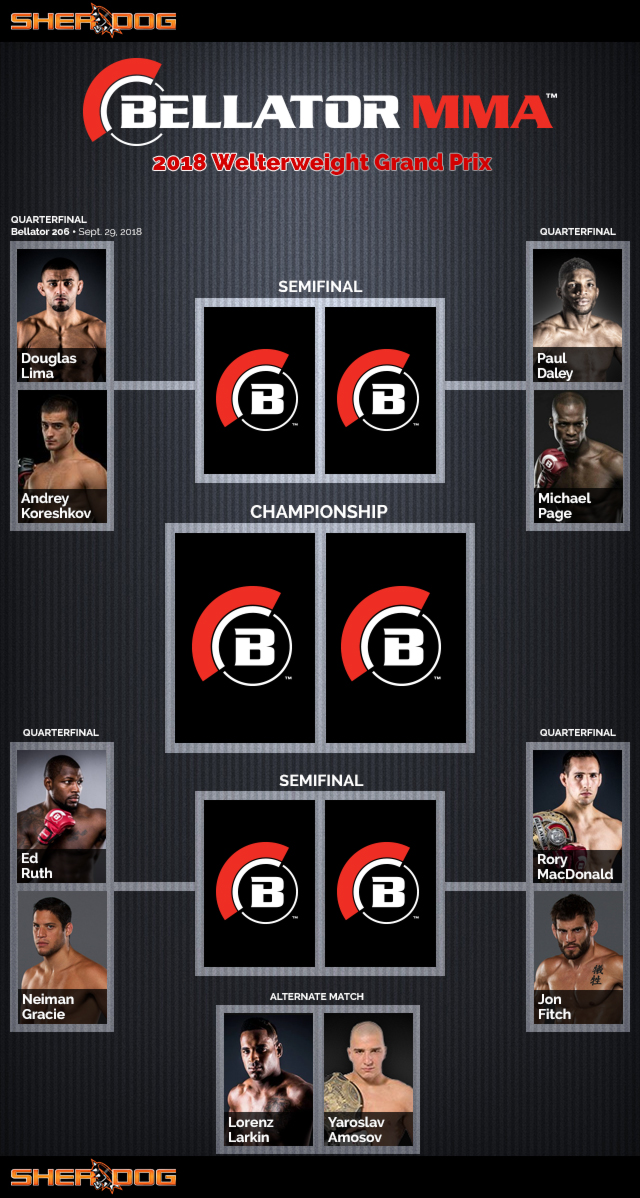 At long last, the bracket for Bellator MMA’s eight-man welterweight tournament has been announced, and thus far it’s given fight fans plenty to salivate over. Amongst its offerings are a rubber match between former champions Douglas Lima and Andrey Koreshkov, one of the most eagerly anticipated grudge matches in years in Michael Page versus Paul Daley, the chaos of having the welterweight title on the line from day one and a member of the Gracie clan thrown in for good measure. MMA’s No. 2 promotion is looking to parlay the moderate success of its ongoing heavyweight grand prix and its recent deal with streaming platform DAZN into the most ambitious campaign in the organization’s history -- and it all starts Sept. 29.

It’s the shot in the arm that MMA desperately needs right now -- and provides a welcome counterpoint to the Ultimate Fighting Championship’s aimlessness as of late. With MMA’s torch bearer creating and dissolving interim belts, green-lighting dubious “money fights” and demonstrating a continued apathy towards divisional maintenance and turnover, there’s a sense that the promotion is staggering from event to event, making decisions to maximize quarterly earnings with little regard for the future. This has made it harder to invest in the fighters and narratives the promotion pushes on any given weekend, and has encouraged a cynicism and distrust for the UFC amongst even the most hardcore fans that’s probably at least partially responsible for the continued contraction in ratings.

In the midst of this volatility, Bellator’s welterweight Grand Prix stands as an anchor of stability. Promising to play out over the better part of a year, the fates of some of the organization’s biggest names, and its most promising prospects, are locked down over that period and every fight fits into a broader storyline. Can Rory MacDonald prove his status as a pound-for-pound great by retaining his title throughout the whole tournament? Will MVP’s creativity and dynamism translate when he’s faced with championship-caliber opponents? Can Jon Fitch get a second world title and -- against the odds -- make the second chapter of his MMA career his most successful and rewarding? Tune in to find out. No need to follow the behind-the-scenes politics because there are none. For a change, winning is the only criteria for advancement.

Considering Bellator’s history, it’s somewhat baffling to think of them as the adult in the room in 2018. The San Jose-based promotion may have been built as a monument to meritocracy -- it originally decided its champions via a cascading series of tournaments that founder Bjorn Rebney never grew tired of exalting --but since Scott Coker took the reins of the organization in 2014, that’s hardly been a cornerstone principle. Bouts like those between street fighter’s Kimbo Slice and Dhafir Harris AKA “Dada 5000”, where the latter almost died in the cage due to a heart attack, and the Royce Gracie – Ken Shamrock rubber match where the combined age of the combatants was 101, indicated that Bellator was more than happy to scoop the bottom of the barrel if it converted morbid curiosity into ticket sales and a high Nielsen rating. Bellator was the circus tent showcasing freak-show fights and a senior circuit for past-their-use-by-date legends; a smorgasbord of guilty pleasures that straddled the boundaries between sports, entertainment and exploitation in a way not seen since Japan’s Pride Fighting Championships.

All of a sudden however, the line between Bellator and the UFC seems somehow a lot closer. Not economically -- the chasm between the revenues of the two promotions still favors the latter by a ratio of at least 10 to 1. But in terms of the quality of the shows, and the sustainability of the product, Bellator seems to be gaining some ground, positioning itself as a genuine alternative for fans and fighters disillusioned with the UFC’s new status quo.

While the UFC jumps at the chance to stall the heavyweight division by awarding a title shot to Brock Lesnar -- who is 0-2 with one no-contest since 2010, still serving a suspension for a failed drug test and almost certainly not sticking around past one fight -- Bellator has played the long game with its heavyweight grand prix and it’s starting to bear fruit. As the UFC play fast and loose with the careers of mega-prospects like Cody Garbrandt and Francis Ngannou, Bellator have demonstrated patience and prudence with the likes of Aaron Pico and A.J. McKee. As White drags down another of his athletes for some perceived slight, Coker is the consummate professional.

None of this is to suggest that Bellator is itself beyond reproach; much less impervious to the twin forces of greed and short-sightedness that tend to predominate in combat sports. But while the UFC is moving further and further away from the bedrock norms that made the company so successful, Bellator’s moves as of late indicate it is trending in the opposite direction.

That’s a good thing for MMA, and while we’re still a long way from Bellator making a dent in the UFC’s market share, undertakings like the welterweight tournament are taking the promotion further and further outside the latter’s shadow for all the right reasons.

Jacob Debets is a recent law graduate who lives in Melbourne, Australia. He has been an MMA fan for more than a decade and trains in muay Thai and boxing at DMDs MMA in Brunswick. You can view more of his writing at jacobdebets.com.