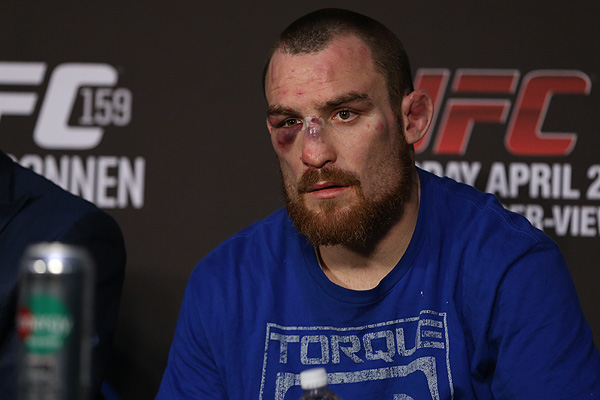 Pat Healy came through in his first UFC appearance since 2006. | Photo: Dave Mandel/Sherdog.com


UFC 159 “Jones vs. Sonnen” on Saturday at the Prudential Center in Newark, N.J., gave rise to a bizarre night of eye pokes, dislocations and even some unexpected stoppages. Added to the mix were three upsets by Bryan Caraway, Cody McKenzie and Pat Healy.

In what was the most unexpected upset at UFC 159, Healy, a +260 underdog, not only defeated Jim Miller, at -290, but also beat him at his own game -- one of relentless aggression.

Miller opened strong, landing kicks and punches, fishing for an armbar and delivering some vicious ground-and-pound in the first round. However, the tide began to turn in the second, where “Bam Bam’s” striking, grappling game and ground-and-pound took hold. The third round provided more of the same, though Healy brought it to a decisive conclusion when he rendered Miller unconscious with a rear-naked choke with 58 seconds left in the bout.

File Photo
Caraway did not settle for a decision.
Erik Perez was originally scheduled to face Johnny Bedford, but Caraway stepped in as a late replacement on only six days’ notice. Although Bedford, a -135 favorite, had a full training camp and a superior striking game, he had no answer for Caraway’s takedowns, which were set up with left hooks and followed by elbows on the ground.

Entering the cage as a +125 underdog, Caraway refused to settle for a decision win and ended the fight in fine fashion. Although he was ahead on the scorecards going into the third round, the Yakima, Wash., native did not use that as an excuse to grow complacent. In the last seconds of the final period, he locked down a mounted guillotine choke, forcing Bedford to tap with just 16 seconds left in the match.

It was not a good night for Leonard Garcia, a -200 favorite, as he lost his fifth bout in a row and put his Ultimate Fighting Championship career in jeopardy. Cody McKenzie, at +185, showcased his grappling game, and though none of his submission attempts found the mark, he clearly dominated the bout with 30-27, 30-27 and 29-28 nods on the judges’ scorecards.

Although Garcia fought with increasing urgency as the clock waned, more of his wild haymakers missed than connected. McKenzie’s patented guillotine choke did not seal the deal in the first round, but his persistent jab, relentless strikes from back mount and sticky grappling were more than enough to wear down the “Bad Boy” and secure him the victory.