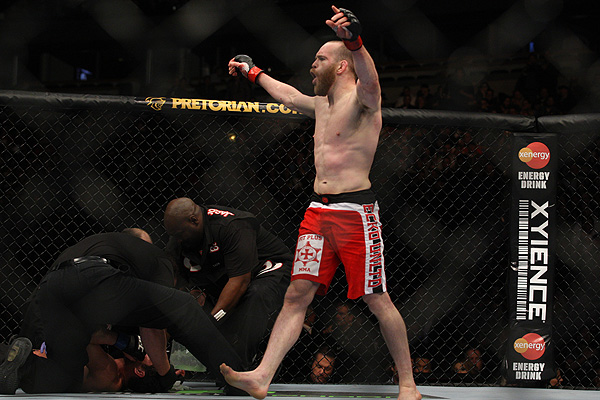 T.J. Grant has benefited from his move to 155 pounds. | Ian Spanier/Zuffa LLC/Getty Images


Sometimes dropping to a lower weight class can make all the difference in the world. Case in point: T.J. Grant.

Having posted a 3-3 mark as a welterweight, Grant moved to 155 pounds in 2011 and has since pieced together a five-fight winning streak. Two minutes and seven seconds was all it took for Grant, a +115 underdog, to score the upset on Gray Maynard at UFC 160 on Saturday at the MGM Grand Garden Arena in Las Vegas. His quick finish earned him not only a $50,000 “Knockout of the Night” bonus but a coveted shot at lightweight champion Benson Henderson. Maynard, who entered as a -145 favorite, appears to have a long, slow road ahead of him if he intends to make a case for title contention again.

Most have grown tired of the never-leave-it-in-the-hands-of-the-judges adage, but sometimes even what seems like a 10-8 round does not win the fight. Although he stepped in as a replacement for the injured Gunnar Nelson, Rick Story walked into his bout with Mike Pyle as a -167 favorite.

File Photo
Pyle has won four straight.
The Brave Legion export had Pyle (+137) reeling from punches in the first round, but the Tennessee native weathered the storm and retaliated with submission attempts, standing elbows and some knees and punches of his own to secure a contentions split decision victory.

Robert Whittaker faced Colton Smith in a battle of “Ultimate Fighter” winners, and most expected Smith, a -145 favorite, to come out with a decision. However, Whittaker (+115) showcased his striking game and finished the fight with a clean left hook and follow-up ground-and-pound in the third round. Smith, who never got his wrestling in gear, seemed to lose steam as the fight wore on.

Few fighters are as routinely underestimated as George Roop. He threw the oddsmakers a curveball at UFC 158, where he defeated Reuben Duran by decision. Three months later, he walked away with a victory over Brian Bowles, having stopped the former World Extreme Cagefighting champion with second-round punches.

Roop climbed into the cage as a +220 underdog. Bowles, who had not fought in 18 months, utilized his potent right hand in the first round and went for the finish with a mounted guillotine choke. However, Roop survived, floored Bowles with a straight left and followed up with punches until referee Herb Dean had seen enough.