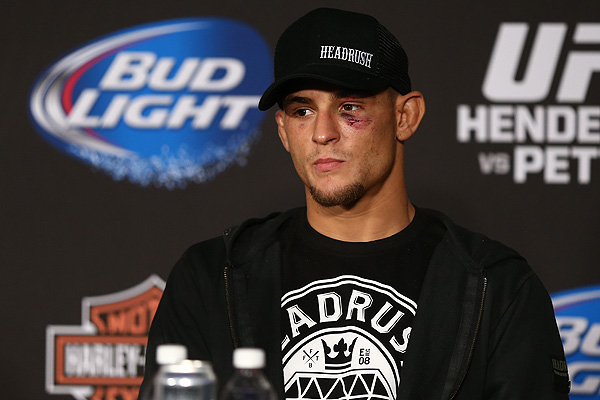 
Roufusport’s Erik Koch (-205) may have survived three rounds with underdog Dustin Poirier (+175) at UFC 164 on Saturday in Milwaukee, but he nevertheless exited the Octagon with another loss on his ledger.

Crisp striking and some solid grappling led to an important victory for Poirier, who defended two triangle choke attempts in the first round and a rear-naked choke in the third. The American Top Team featherweight almost delivered a finish in round one with his patented brabo choke. Koch was saved by the bell but took a pounding for the remainder of the bout, ultimately losing a decision: 29-28, 29-27 and 29-27 on the scorecards.

Soa Palelei was a slight underdog (+115) when he stepped into the Octagon to face Ukrainian prospect Nikita Krylov (-135), according to BetDSI odds. Although neither heavyweight appeared to possess the cardio required for a drawn-out battle, Palelei overcame various submission attempts, heavy strikes from the newcomer and his own exhaustion. He managed to counter a takedown attempt with jarring punches, ending the bout via technical knockout in the third round.

Chico Camus (+192) scored an upset over Road Fighting Championship titleholder Kyung Ho Kang (-230). Two judges gave the Duke Roufus protégé a two-rounds-to-one nod, while the remaining judge cast a befuddling 30-27 scorecard in his favor. The “King” almost finished Kang in the third round, following an upkick with a series of punches.

Finally, Hyun Gyu Lim (+205) put away Cage Warriors Fighting Championship titleholder Pascal Krauss (-245) in the first round of a welterweight bout that netted both men $50,000 bonuses for “Fight of the Night.” Power punches and a vicious knee to Krauss’ face brought the match to a close with a little more than a minute left in round one.