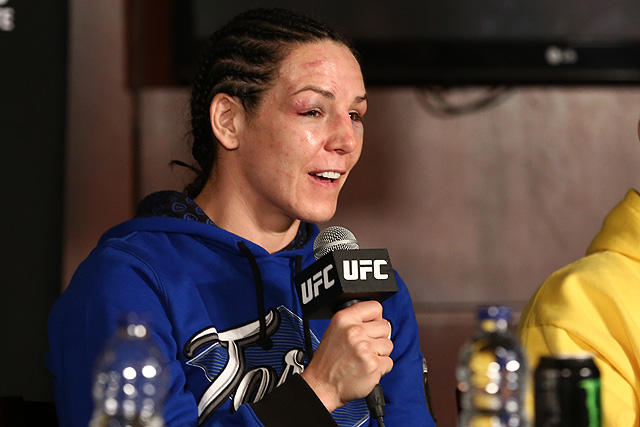 
Brazilian jiu-jitsu black belt Alexis Davis scored the sole upset at UFC 186, as she re-established herself in the Ultimate Fighting Championship women’s bantamweight division and emerged victorious from her trilogy match with Sarah Kaufman on Saturday at the Bell Centre in Montreal.

Kaufman, a -194 favorite, had defeated Davis (+165) the first two times they met, delivering a technical knockout in 2007 and earning a razor-thin majority decision in their 2012 rematch. Their third bout ended on Davis’ terms, though early returns for the grappler were not promising. A former Strikeforce champion, Kaufman used her stellar striking skills to land punch after punch in the first round, all while avoiding the potent ground game of her counterpart.

“She put a lot more tools out there than I expected,” Davis said during a post-fight media scrum. “I expected her to come out [with] mainly hands, but she was throwing her kicks, her front kicks, keeping the space [and] taking those key shots. It was a tough fight and tougher than I thought it was going to be. I expected to get punched a lot, but I didn’t expect as many strong kicks as she was going to have.”

Davis landed a pivotal takedown in round two, transitioned to full mount and then worked for a triangle choke. Kaufman escaped, but the “Ally-Gator” shifted to an inverted armbar for the tapout 1:52 into the second round.

“I haven’t had a strong finish in a while,” Davis said. “I think I’m a better fighter than I’ve been showing I really am. I feel like this was definitely a strong win, and it should push me higher in the division. It feels really great for me to be able to beat Sarah because I’m like, ‘Wow, I’ve never seen Sarah fight that strong before and have so many tools.’ I’m really proud of myself.

“I was just trying to go with my senses and listen to my corners [and] just kind of go back into my jiu-jitsu background,” she added. “[It was] nothing that I worked on specifically for this fight.”

Davis, 30, has won six of her past seven fights, a 16-second knockout loss to UFC women’s bantamweight titleholder Ronda Rousey the lone setback. The win over Kaufman puts her back on the map at 135 pounds.

“I hope there’s a target on my back,” Davis said. “If there wasn’t, I wouldn’t be one of the top females in the division.”