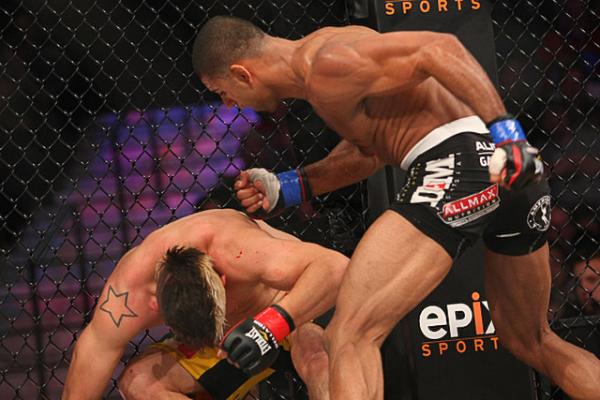 
Their twice-postponed rematch will finally have its day.

Ultimate Fighting Championship veteran Ben Saunders will meet Douglas Lima in the Bellator MMA Season 8 welterweight tournament final at Bellator 100 on Friday at the Grand Canyon University Arena in Phoenix. To the winner goes a crack at the promotion’s 170-pound crown currently held by the undefeated and world-ranked Ben Askren.

Based at an American Top Team affiliate in Orlando, Fla., Saunders will carry a three-fight winning streak into the cage. The 30-year-old Floridian last appeared at Bellator 90 in February, when he knocked out Raul Amaya with a first-round head kick at the Maverik Center in Salt Lake City. A quarterfinalist on Season 7 of “The Ultimate Fighter” reality series, he knows Lima well; the Brazilian wiped him out with punches at Bellator 57 a little more than two years ago. Saunders has compiled an 8-2 record since being released by the UFC after consecutive losses to Jon Fitch and Dennis Hallman in 2010.

Lima operates out of an American Top Team satellite in Atlanta. The 25-year-old Brazilian last fought at Bellator 90, where he needed just 2:34 to dispatch World Extreme Cagefighting alum Bryan Baker. Lima has posted 12 wins in his past 13 outings, a unanimous decision defeat to Askren the lone hiccup. A potent finisher with a well-rounded set of skills, he has delivered 21 of his 25 victories by knockout, technical knockout or submission, 14 of them inside one round.

With the Season 8 tournament final between Saunders and Lima as the centerpiece, here are 10 facts surrounding Bellator 100:

FACT 1: Saunders’ first two bouts as a professional ended in draws, as he fought to stalemates against Crafton Wallace and Diego Lionel Visotzky.

FACT 4: Efrain Escudero is one of four active former winners of “The Ultimate Fighter” reality series not currently on the UFC roster. Joe Stevenson, Kendall Grove and Travis Lutter are the others.

FACT 5: Siala-Mou Siliga has not won a fight since June 2007, when he stopped Ruben Villareal on first-round punches as the same K-1 Hero’s event in which World Wrestling Entertainment superstar Brock Lesnar made his professional mixed martial arts debut.

FACT 6: English welterweight Mark Scanlon has finished four opponents in less than 90 seconds, including a 10-second knockout and a 51-second submission.

FACT 7: Rick Hawn was a four-time United States national champion in judo and competed in the discipline at the 2004 Olympics in Athens, Greece, placing ninth.

FACT 8: All 11 of Strikeforce alum Herman Terrado’s victories have come by knockout, technical knockout or submission.

FACT 10: Unbeaten Rage in the Cage veteran Dan Charles owns a 7-0 record, but his opponents have combined for an alarming 6-12 mark.