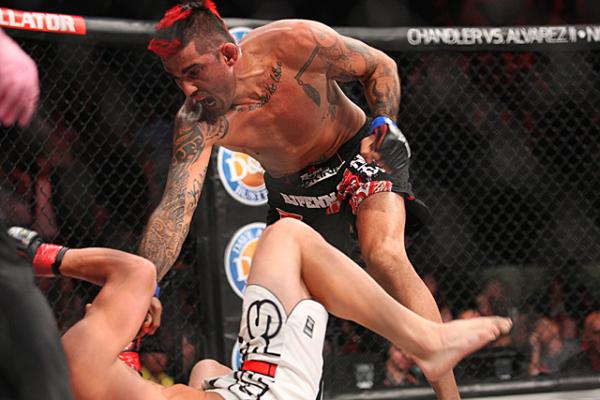 Kendall Grove has bounced around since his UFC release. | Photo: Keith Mills/Sherdog.com


Kendall Grove has led something of a vagabond existence since being released by the Ultimate Fighting Championship in 2011, having fought 12 times across nine different organizations. Perhaps he will find a home in Bellator MMA.

“The Ultimate Fighter” Season 3 winner will lock horns with Brett Cooper in the Season 10 middleweight tournament semifinals at Bellator 114 on Friday at the Maverik Center in West Valley City, Utah. Spike TV will carry the four-fight main card, which includes the Grove-Cooper semifinal, at 9 p.m. ET/8 p.m. CT. The prelims will stream to Spike.com two hours prior.

Grove will enter the cage on the strength of back-to-back wins. The 6-foot-6 Hawaiian made his promotional debut at Bellator 104 in October, recording a unanimous decision over Joe Vedepo at the U.S. Cellular Center in Cedar Rapids, Iowa. Grove, 31, has secured 13 of his 19 career victories by knockout, technical knockout or submission. Wins over Alan Belcher, Joe Riggs and Ed Herman anchor his resume, which covers more than a decade.

Cooper finds himself on a two-fight losing streak. The 26-year-old Reign MMA export last fought at Bellator 98 in September, when he dropped a five-round unanimous decision to Russian striker Alexander Shlemenko and failed to unseat the reigning Bellator middleweight champion at the Mohegan Sun Arena in Uncasville, Conn. Cooper has six first-round finishes to his credit, including 10-, 67- and 98-second stoppages.

Deep in talent and salted with compelling storylines, tournament drama and a middleweight title fight, here is what to watch for at Bellator 114:


Shlemenko, who has rattled off 12 straight wins, will put his 185-pound title on the line against upstart Brennan Ward in the main event. The Rusfighters Sport Club representative last competed at Bellator 109 in November, when he bounced former World Extreme Cagefighting champion Doug Marshall with a first-round body punch at the Sands Casino Event in Bethlehem, Pa. Shlemenko, 29, has delivered 36 of his 49 career victories by KO, TKO or submission.

As the Bellator Season 9 tournament winner, Ward will step into the cage on a four-fight winning streak. The outspoken 25-year-old earned his shot at the title with a second-round TKO against Danish prospect Mikkel Parlo at Bellator 107 in November. All but one of his 10 professional bouts have concluded with a finish, including his lone defeat -- a 15-second armbar-induced submission to Aaron Johnson at Bellator 89. Ward wrestled collegiately at Johnson & Wales University in Providence, R.I., where he was an NCAA All-American and national finalist at the Division III level. 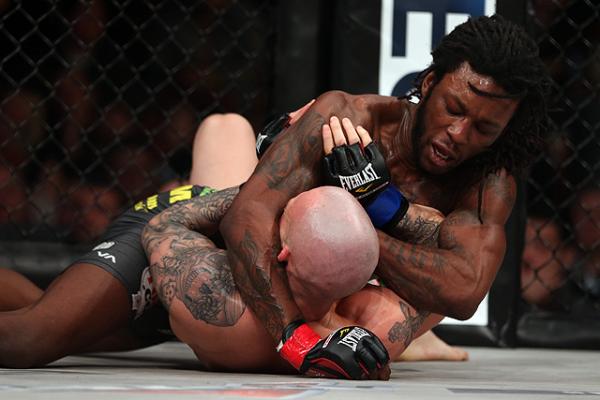 Photo: Dave Mandel/Sherdog.com
Green owns a 10-2 mark.
The Season 10 featherweight tournament has been whittled down to its Final Four: Desmond Green vs. Will Martinez and Daniel Weichel vs. Matt Bessette.

Team Bombsquad’s Green advanced to the semifinals with a unanimous decision over Mike Richman at Bellator 110 in February. The 24-year-old has posted four wins in his past five appearances, emerging as a promising commodity at 145 pounds. Green was a two-time Mid-American Conference wrestling champion at the University of Buffalo.

Martinez, 33, qualified for the semifinals with a unanimous decision over prized Brazilian prospect Goiti Yamauchi a little less than a month ago. The Philadelphia native will enter the cage on a streak of eight straight wins. A Brazilian jiu-jitsu black belt under Carlos Machado, Martinez has secured more than half (five) of his nine career victories by submission, four of them via rear-naked choke.

A German submission specialist, Weichel moved into the semis by forcing a tapout from Scott Cleve with a first-round rear-naked choke at Bellator 110. The well-traveled 29-year-old has won nine of his past 10 bouts, including four in a row. An M-1 Global, King of the Cage and British Association of Mixed Martial Arts alum, Weichel owns a May 2006 submission victory over UFC featherweight Dennis Siver.

Bessette was not expected to reach the semifinal round but sprang the upset on UFC and WEC veteran Diego Nunes in February, earning a split decision over the Brazilian at Bellator 110. The Brazilian jiu-jitsu brown belt has compiled a perfect 4-0 mark in Bellator, with wins over Nunes, Nick Piedmont, Paul Barrow and Saul Almeida. Bessette has captured titles inside the Reality Fighting and Global Fight League promotions.


Bubba Jenkins entered MMA to the tune of hype and expectations. A two-time NCAA All-American wrestler at Penn State University (2008) and Arizona State University (2011), he won a national championship for the Sun Devils as a senior in 2011. Projections skyrocketed after Jenkins started his professional mixed martial arts career with four consecutive finishes, three of them inside one round. Then came his encounter with the unbeaten Larue Burley at Bellator 100, where Jenkins faded to fatigue before succumbing to third-round punches.

Though the setback interrupted his climb, it could prove valuable in the long run. With expectations tempered, Jenkins can be allowed to develop at a more reasonable pace. The 26-year-old American Top Team representative rebounded with a third-round TKO against Ian Rammel in November and will try to build on his momentum at the expense of Sean Powers. Spawned by The Pit Elevated Fight Team, the 6-foot-2 Powers has authored four of his eight victories by choke-induced submission.