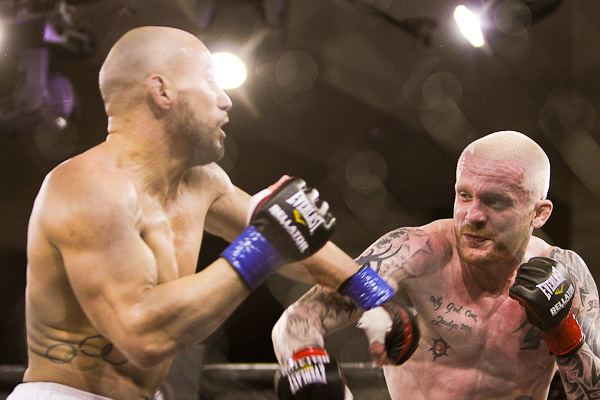 
We knew this time would come, dear readers. Only one more Bellator Fighting Championships season remains until I can no longer make “Nitro Circus Live” jokes anymore. Tragic, yes, but life is change.

Bellator kicks off its seventh season on Friday, featuring the quarterfinals of the organization’s latest welterweight tournament. Here is what to watch for at Bellator 74, which takes place at Caesars Hotel and Casino in Atlantic City, N.J., and airs on MTV2:


Jim Wallhead is a bloke who has been around the block.

He is also a man who has lost just once in his last 11 outings, falling only to future lightweight title challenger Rick Hawn during the Season 4 welterweight tournament quarterfinals. Wallhead rebounded from that setback nicely enough, outpointing former UFC title challenger Frank Trigg at before absolutely wrecking Strikeforce veteran Joey Villasenor to close out last year. Both fights were contested under the British Association of Mixed Martial Arts banner.

Now, Wallhead figures to be one of the tournament favorites, as he makes his third Bellator appearance against Lyman Good. Wallhead is not the flashiest knife in the drawer, but he is a sharp one. The 28-year-old is not known to beat himself and typically stays controlled with his standup technique. Offensively, the Brit packs a serious punch, usually coming in the form of the heavy left hook that signaled the beginning of the end for Villasenor.

All of this is mentioned in addition to Wallhead’s base discipline and namesake, which has earned him nine submission victories during his seven-year career. Despite Wallhead’s considerable skills, he has yet to really make a name for himself stateside. Will he seize this second opportunity?

Another Good Go Around


How many tournaments is this for Good, one might ask? Three would be the correct answer.

Newer fans may not recall, but the Team Tiger Schulmann product began his Bellator career with a Season 1 tournament win in 2009, finishing all three of his opponents to become the promotion’s inaugural 170-pound king.

Eight months later, Good stumbled in his first title defense against Ben Askren, dropping a unanimous decision to the potent wrestler that cost him both his belt and his perfect record. Following the loss, “Cyborg” tried in vain to earn a second crack at Askren by entering the Season 4 draw, only to drop a split decision to eventual tournament winner Hawn.

Should Good lose to Wallhead, I am not sure the New Yorker would be granted a fourth tournament berth, even if he is a former champion. Could this be the last time we see the “Cyborg” in Bellator’s cage? Keith Mills/Sherdog.com
Tristar Gym's Nordine Taleb is 8-1.
Time to see what Nordine Taleb is made of. He has thus far proved to be more adamantium than goose down, but that might quickly change when he is thrown into Bellator’s unforgiving tournament structure.

Taleb’s skills are considerable. Look no further than his title-winning knockout of UFC veteran Pete Sell at Ring of Combat 38 for a display of the speed and power living within his right hand. His lead appendage is also capable of consistently dealing out damage -- a relatively rare sight in MMA -- as the 31-year-old primarily used his snapping jab to stop Matt MacGrath in his most recent in-cage appearance. Complimenting that piston-like left is his ability to counter punch while moving in and out. When the Canadian smells blood in the water, he goes for it, no questions asked. This can leave him a little open at times, but his finishing instincts appear to be solid, if not a tad over-aggressive at this point.

My main concern, especially when considering the man he will face at Bellator 74, is his tendency to hold his hands low. One can get away with that when facing the likes of MacGrath and Matt Secor. Something tells me ex-Dream champion Marius Zaromskis might view that type of behavior as an open invitation to lace one of those Louisville Slugger-esque shinbones upside Taleb’s skull.


Even if I could bulk up to 170 pounds and was given a club, I still would not be super stoked about fighting Andrey Koreshkov.

Arguably the most promising young fighter representing the RusFighters Sport Club, Koreshkov might also be the most dangerous fighter in this eight-man field. The Russian’s well-roundedness and aggressiveness are his two greatest assets, marked by the vast variety of violence he has inflicted upon his 10 career victims thus far, largely due to his ability to punish an opponent nearly as easily with a spinning heel kick as with a right straight.

A serious test of his defense and ability to absorb punishment has yet to be seen in his two Bellator bouts, but I am willing to bet Jordan Smith is just a teensy bit antsy to hit something after his 22-second decimation at the hands of David Rickels in Season 6.


Upon first glance, most observers will likely look at the names Michail Tsarev and Tim Welch and make a funny face. I think that is a mistake. Three-to-one this baby does not go 15 minutes.

Like his teammate Koreshkov, Tsarev looks to follow in the footsteps of his teammate. Alexander Shlemenko. He loves to attack from range, particularly with his lead leg, but he can be reckless in covering distance at times. “The Lonely Wolf” also has a problem with backing straight up while on the retreat, but he has thus far gone generally unpunished for such behavior. Will his ultra-aggressive submission style prove to be a weapon or a hindrance in his first fight outside Russian borders?

Welch is about as green as a Teenage Mutant Ninja Turtle, but man, can this kid swat. While his standup attack currently consists of throwing exclusively with the intent to kill, not stun, the method has proved brutally effective so far. Now training out of the Sports Lab in Portland, Ore., the Montanan has likely picked up some new tricks and further refined his technical abilities to compliment that young-man strength.

Out of 37 combined fights, these guys have only gone the distance three times. That should tell an astute observer all he or she needs to know.