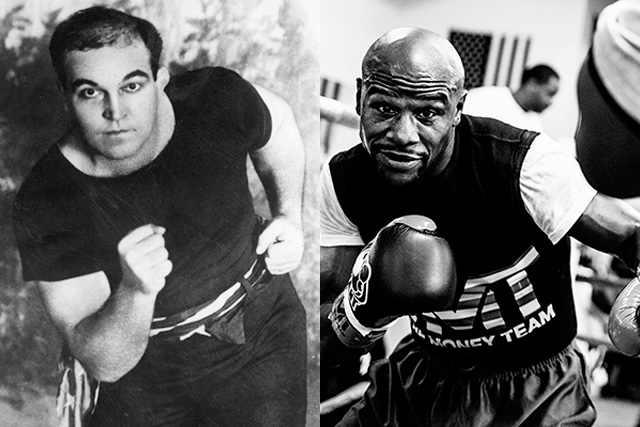 No one has solved the Floyd Mayweather Jr. riddle. | Photo: Getty Collection/Illustration


There are many things that define fighters, each in vastly different ways. Yet once every few generations a fighter will identify himself as unique among other thoroughly gifted athletes, many of whom will never quite touch their full potential. It is very rare that an elite athlete not only touches that potential but seems to master it and take it to levels beyond even his own capability. Floyd Mayweather Jr., love him or hate him, is one of those athletes.

This article is going to examine a few of the in-depth details that make Mayweather the fighter he is, a fighter who is without a doubt one of the best of any era, if you look beyond personal bias, status of records and their significance on the landscape of the sport of boxing. If you put Mayweather against all other greats, stylistically or by comparing what they have accomplished, he stands up to them in a major way.

The first aspect of Mayweather’s abilities has to be acknowledged duly. The man is educated in pugilism and educated well. It’s not just about coming from a boxing family in that his father and both of his uncles fought, two of them on the global stage. It is really more centered on the style that his father named to me as the “Crab.” Many people have tried to emulate Mayweather’s stance: lead arm down and tucked tight to the body, rear hand approximately thumb-distance from the cheek, feet slightly wider than the shoulders, with the knees bent in a half-crouch. However, few have fully understood how and why it works. Mayweather does not begin in this position to look cool or even necessarily to taunt the opponent. He is using a style of fighting, a style much, much older than it is given credit for.

As part of my own personal research into the annals of boxing history, I stumbled upon a man named Tommy Ryan, the former welterweight and middleweight champion who later trained heavyweight champion Jim Jeffries. Ryan taught Jeffries a style called the “Crouching Crab,” so when Mayweather Sr. said the same word, a bell went off. When researching Jeffries and looking at his motions and held positions, I realized the “Crab” style could just be a descendant of the “Crouching Crab.” 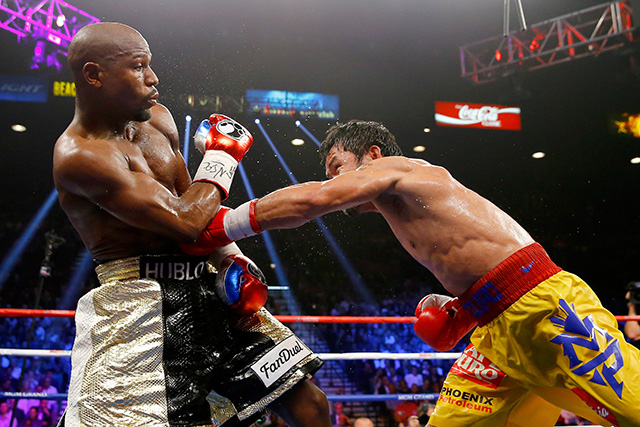 (+ Enlarge) | Photo: Al Bello/Getty Images
Mayweather knows how to play it off.
This is very significant because it confirmed something I had suspected earlier as a trainer myself, and having known Mayweather Sr. for more than five years, I knew their style wasn’t just a collection of moves. It has integrity, meaning for every problem one could face, the “Crab” system has an answer. Whether it is the most optimal answer or not is subjective, but the answers are there. I’ve had the chance to speak with other boxers who learned their craft in Michigan. Sure enough, many of them learned similar beginning positions and answers to the problems, such as the way Mayweather will turn his waist to his right to deflect a right hand with his left shoulder and turn back to the left while raising the right hand to catch a hook.

Mayweather Sr. seems to have distinctly distilled the style from its original practices, perhaps particularly to suit the fact that he himself had very quick hands, which his son inherited. Many of the counters begin with either straight punches or very short, tight chopping hooks or uppercuts. However, the fact remains that the “Crab” seems to have ended up in Michigan and lent to the prowess of fighters such as the Mayweathers and James Toney.

It would be futile to attempt to describe this system in mere written words. However, if anyone ever wondered why Mayweather never quite seems to panic, never seems so jostled he cannot function and always seems to be able to preserve himself even when pressed, well, that is what having a system with perfect integrity gives you. It gives you programmed answers that have a high success rate from before you even learned it.

Mayweather did something spectacular throughout the course of his career: He further distilled the system and customized it specifically to himself. In other words, he seemed to subtract and add things that suited his game. Many have said he is a blend of Roger Mayweather’s offensive prowess, the defensive prowess of Mayweather Sr. and Jeff Mayweather’s unwavering ability to keep cool. I feel it goes beyond that. Mayweather distinctly added circular counters where his father would normally encourage straight ones. He found a home within the system for odd-angled punches such as circular and seemingly wide right hooks, both to the body and head. He did this while also assuring a sniper-like accuracy to his counters. In other words, when he lands a punch, it looks big; it looks like a production; it draws the “wow.” An opponent can hit Mayweather and then have his landed punch canceled in the minds of viewers due to the accuracy and beauty of the counter “Money” will land in return. This is one of the reasons no one ever seems to remember Mayweather getting touched in fights where he definitely took punches.

The other amazing thing Mayweather does that is so subtle it escapes most people’s vision entirely is shift positions so distinctly when he is being attacked. Through that, he can create an illusion of flawless defense. Many have asked me about the Philadelphia fighters, as Mayweather’s style is often referred to -- and mistakenly so, in my opinion -- as the “Philly Shell.” There are fighters out of Philadelphia that used what looks like the Michigan “Crab” style’s beginning position, but most of the Philly fighters were different animals altogether. The initial position can perhaps be drawn back to the influence of Eddie Futch, as men directly taught by him are primary examples: Joe Frazier, Georgie Benton and Ken Norton. Even Benton’s pupil, Bennie Briscoe, fits the mold. Benton was a fantastic counterpuncher, but he often said himself that his aggression would get the better of him in the ring.

However, one Philly fighter stands out with the above-named ability to convince you that you did not actually see a punch land: Bernard Hopkins, the other modern scientist. This is why so many people seemed to only be able to pull off controversial split decision wins against Hopkins, even beyond his prime. Like Mayweather, Hopkins makes subtle turns with his body, a shift left, a pivot right, the lowering of an elbow, a slightly deeper knee-bend and a pull back off the head, all while being attacked. These men will make most of the punches missed, and if one or two did land, you would have a hard time convincing anyone without an eagle eye that they actually did get hit. This results in people’s memories of the fights being very distinctly one-sided for Mayweather by a gigantic margin. The truth is if you watch every move closely, they were more competitive than they seemed.

Factor in all these things together and you have a man whom even one of the greatest trainers today, Freddy Roach, has had multiple bites at the apple in trying to defeat him. Mayweather continues to prove to be a puzzle that is extremely difficult, if not impossible, to solve.

Luis Monda is currently a full-time boxing trainer at Johnny Tocco's in Las Vegas, which is the oldest gym in Sin City. Luis has a deep knowledge of combat sports history, and has spent significant time researching lineages in boxing, specifically. He has been involved in the local-fight scene for nearly a decade: first as a potential competitor, then as the manager of Tocco's, and now as an instructor to boxers, kickboxers, and mixed martial arts fighters.