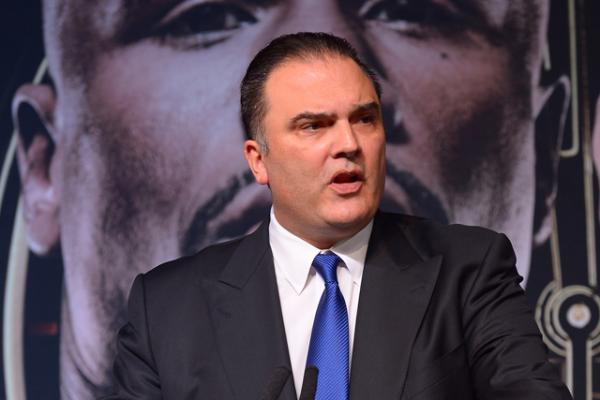 
Power shifts in the boxing industry often change as fast as the weather. There’s a reason the Ultimate Fighting Championship desperately wants to keep its business model as insulated as possible from any sort of real free agency or co-promotional deals. The only promoters the UFC has interest in working with are those it either owns or those that act as part of a de facto farm system.

The closest attempt to the UFC business model we’ve seen in boxing recently involved Showtime and Golden Boy Promotions. The integral figure in that business mixture was Richard Schaefer, the financial and business muscle for Golden Boy. Without Schaefer, Golden Boy would have never reached the heights it did as a promotional company. He was willing to do all the dirty work and would not take “no” for an answer; and unlike so many other promoters in the boxing landscape, Schaefer didn’t want to just win. He wanted to obliterate the competition.

During the weekend of the Floyd Mayweather Jr.-Marcos Maidana fight in Las Vegas, Oscar De La Hoya was miffed about the fact that he basically had no real power in the promotional company he founded. Not only that, he had the proverbial salt rubbed into the wounds by watching non-Golden Boy fighters signed to Al Haymon fighting on the card. The only question regarding the divorce between De La Hoya and Schaefer was whether the latter would resign or perform a hostile takeover.

Schaefer on Monday resigned from the company. He kept his shares in Golden Boy for safe measure, but for all intents and purposes, this was Schaefer calling De La Hoya’s bluff. You want your company back? Here you go. See if matchmaker Eric Gomez and your boys can do what I did for you. Rather than expend energy fighting for a promotional company that was entirely dependent on his money and negotiating skills, Schaefer simply made the logical calculation to walk away and say to hell with it.

Top Rank founder and CEO Bob Arum is the happiest man in the room for a reason. He gets to reconcile his differences with De La Hoya, and he looks gracious in doing so; it’s good public relations. It’s also a temporary win for Arum because he got Schaefer -- a man intent on putting the screws to him and HBO -- off the stage. It was working. Schaefer had the support of Mayweather, Mayweather’s business man, Leonard Ellerbe, and super-hustler Haymon. As the inimitable Steve Kim of Maxboxing once described Haymon, the man was a creature created by HBO. When Haymon was busy helping out the enemy, HBO didn’t attack Haymon like it could have or should have. I’m sure HBO has its reasons. The only entity that has shown any desire to attack Haymon and go after him in the courts is Main Events.

Hours after Schaefer resigned from Golden Boy, Mayweather made it clear he would no longer work with the company. Schaefer was the only asset Golden Boy brought to the table for Mayweather. Ellerbe made it crystal clear that he and Mayweather support Schaefer and would welcome him with open arms for future boxing business ventures.

The wildcard in all of this is Haymon. His name and reputation sound like those that belong to another famous guy with a similar-sounding last name: World Wrestling Entertainment’s Paul Heyman.

Stephen Espinoza, Golden Boy’s former attorney and current boss for boxing at Showtime, stated that he would continue working with Golden Boy and Mayweather. Whether or not this means some of Top Rank’s fighters will return to Showtime remains unknown. However, Arum would love nothing more than to rub it into the noses of Showtime executives.

All this is small ball compared to the big question about which casual fight fans care: Does the divorce between Golden Boy and Schaefer change the odds of finally seeing Mayweather fight Manny Pacquiao?

As long as Schaefer and Mayweather were teamed together in an attempt to slaughter Top Rank, we weren’t going to see Mayweather vs. Pacquiao happen. There was no way Arum would be able to negotiate with someone at the table whose mission was to ensure his demise. With Schaefer out of the picture, perhaps the door has opened, if only just a little bit. With that said, don’t hold your breath here. With Ellerbe and Mayweather backing Schaefer, they have a short- and long-term vision in mind. The long-term vision involves Mayweather and Ellerbe working with Schaefer to essentially back a new version of Golden Boy. The difference is that Mayweather may be more willing to play ball with Schaefer in order to accomplish his goals. Schaefer is a take-no-prisoners kind of businessman. That attitude fits in nicely with Mayweather, so it won’t be a surprise if we see a scenario involving Mayweather Promotions and Showtime vs. HBO and everyone else. It would be a similar death march to what we just witnessed with Top Rank and HBO vs. Golden Boy and Showtime.

Everyone knows it still makes the most business sense to get Mayweather vs. Pacquiao booked. The pay-per-view numbers for Pacquaio vs. Timothy Bradley were respectable; the PPV numbers for Mayweather vs. Maidana were slightly disappointing but only because they didn’t crack a million; the UFC would do anything to attract these kinds of numbers in 2014.

With Schaefer temporarily on the sidelines, there will be a temptation for Mayweather to give in and make the dream fight happen. However, the temptation of his retiring undefeated and working to establish a promotional company with Schaefer seems just as desirable. The push-and-pull internal dynamics will be interesting to watch play out over the next few years.