The Ultimate Fighting Championship was originally sold on the concept of fighting style against fighting style. Masters of kung fu, karate, muay Thai and of course jiu-jitsu would battle to prove which fighting discipline was superior.

The elephant in the room during MMA’s discipline versus discipline days was the sport of boxing. A few boxers did compete in the UFC. Most memorably, Art Jimmerson wore one boxing glove for his bout with Royce Gracie at UFC 1. But a top-flight boxer never competed in the UFC and for many years top MMA fighters like Ken Shamrock and Dan Severn would field questions about how they would fare against a Mike Tyson or Evander Holyfield.

Those in MMA recognized that boxers would struggle to pick up the many disciplines needed for what was then labeled no holds barred fighting. However, boxing was still America’s most popular combat sport by a wide margin. To the general public, boxers were perceived as the toughest fighters alive. Boxing was on a completely different level than MMA in the public imagination and there was no incentive for boxers to try out MMA.

That changed with the UFC’s pay-per-view explosion of 2006. All of a sudden huge revenues were coming into American MMA. Top MMA fighters were getting rich off their skills. The sport of MMA continued to grow and reached a level of popularity comparable to if not greater than once mighty boxing.

As a result, the stage was finally set for the long anticipated showdown between an elite MMA fighter and an elite boxer. Multiple division boxing champion and future boxing Hall of Famer James Toney saw the opening and began a campaign to get a fight in the UFC. UFC decision makers were initially cold on the idea, but Toney eventually talked himself into a fight with UFC Hall of Famer Randy Couture Aug. 28 at UFC 118. 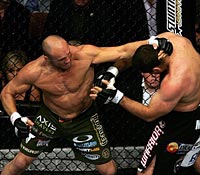 Photo by Sherdog.com
Couture (left) knows all the tricks.
UFC is billing the bout between Couture and Toney as boxing vs. the UFC. It would seem to be the culmination of the longstanding rivalry between MMA and boxing. Only, it isn’t.

Boxing fans, once strongly dismissive of MMA, now by and large recognize the skill and ability of top MMA practitioners. Top-shelf boxers like Bernard Hopkins and David Haye have acknowledged the great difficulty pure boxers would have transitioning into MMA. Only boxing’s ignorant and insecure are left fighting an imagined battle with MMA.

On the flip side, MMA fans no longer need proof of their sport’s legitimacy. Capacity crowds, strong pay-per-view buy rates and greatly enhanced media coverage demonstrate broad acceptance of the sport. MMA can no longer be dismissed with the flick of a wrist.

There is no real answer to whether MMA or boxing is “better.” In 2010, it’s a question that’s rarely even asked. By now everyone recognizes that the rules of the competition will dictate how a boxer fares against a mixed martial artist. Everyone, seemingly, except James Toney.

Toney is not without a chance against Couture. Between Toney’s boxing ability and MMA’s 4-ounce gloves, he will be extremely dangerous for as long as the fight stays on the feet. Unfortunately for the boxing great, that isn’t likely to be a very long time given the wrestling ability of Couture. A crafty wrestling specialist who knows every trick in the book is pretty much the worst possible first MMA opponent for Toney.

A prime world-class boxer could eventually do well in MMA. However, it would take years of cross training in wrestling and jiu-jitsu. Toney is already 41 years old and has less than a year of MMA training. If Usain Bolt decided to give the NFL a try, no team would expect him to be a starting receiver in less than a year.

If Toney is aware of the difficulty of the challenge in front of him, he has done a great job masking it. Toney in promoting the fight has not only spoken with the bluster you would expect of a PPV hype man but has blown off legitimate questions about his training and MMA learning curve.

In recent years, many aspiring MMA fighters with a strong background in an individual discipline have taken similar paths. The trend is to join an established gym with experienced trainers and training partners like American Top Team or American Kickboxing Academy. Those teams offer consistency, knowledge and focus.

By contrast, Toney has done things his way. He has rotated in and out a number of trainers and training partners. There is widespread doubt that Toney is taking his training seriously or that he has a contingency plan if he isn’t able to knock out Couture in the first couple minutes of the fight.

While the boxing versus MMA angle has not garnered a lot of momentum heading into UFC 118, there is no shortage of discussion about Toney. The clash of MMA and boxing no longer has the intrigue it once did. Instead, the intrigue is about James Toney himself, the human oddity still oblivious to the long established fact that MMA and boxing are two very different sports.