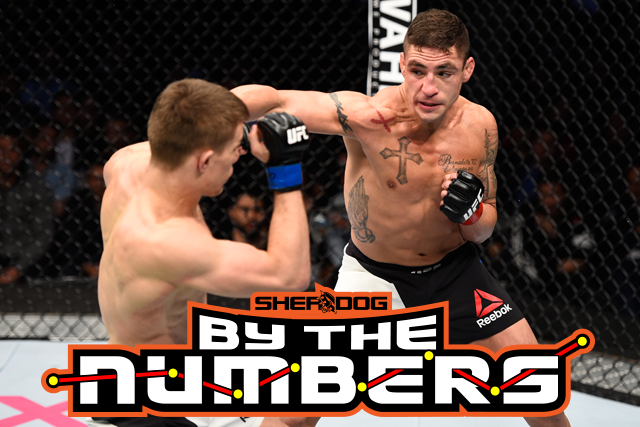 Diego Sanchez has dusted off himself many times, having engaged in some of the most thrilling confrontations in Ultimate Fighting Championship history while piling up 16 victories inside the organization.

Sanchez will attempt to snap a two-fight losing streak when he collides with Craig White as part of the UFC 228 prelims this Saturday at the American Airlines Center in Dallas. The Jackson-Wink MMA staple has no interest in serving as a steppingstone for White, who has delivered all 14 of his wins by knockout, technical knockout or submission.

As the battle-scarred Sanchez makes his final preparations for White, here are some of the numbers that have come to define him:

600: Dollars earned in his first professional MMA bout at Ring of Fire 5 on June 21, 2002. Sanchez submitted Michael Johnson -- not to be mistaken for the current UFC featherweight -- with a rear-naked choke 3:45 into the first round.

17: Wins without a loss to start his career, many of them coming in King of the Cage and the UFC.

15: Minutes needed to defeat Jorge Santiago by unanimous decision and capture the King of the Cage welterweight crown. Afterward, Sanchez was chosen to compete on Season 1 of “The Ultimate Fighter” reality series.

1: Round required to stop Kenny Florian at “The Ultimate Fighter 1” Finale. Sanchez made his way to the middleweight tournament final and put away Florian with punches 2:49 into the first round.

66: Significant strikes landed on Karo Parisyan at UFC Fight Night 6, per FightMetric. Their action-packed, back-and-forth battle earned “Fight of the Night” honors and remains one of Sanchez’s signature performances.

4: Two-fight losing streaks on his resume. Sanchez suffered the first loss of his career to Josh Koscheck at UFC 69 and lost to another powerful wrestler in Jon Fitch at UFC 76. He also dropped back-to-back bouts against B.J. Penn and John Hathaway at UFC 107 and UFC 114, Gilbert Melendez and Myles Jury at UFC 166 and UFC 171 and Al Iaquinta and Matt Brown at UFC Fight Night 108 and UFC Fight Night 120.

7: “Fight of the Night” bonuses banked, tying him for first on the UFC’s all-time list. Sanchez was awarded after his bouts with Parisyan, Melendez, Joe Stevenson, Clay Guida, Paulo Thiago, Martin Kampmann and Jake Ellenberger.

4: Divisions in which he has competed. Sanchez started his career as a welterweight, moved to middleweight and then spent time as a lightweight and featherweight before returning to 170 pounds.

70: Significant strikes absorbed against Penn in his failed bid to claim the UFC lightweight championship at UFC 107. Sanchez only tallied eight significant strikes in return before being stopped 2:37 into the fifth round.