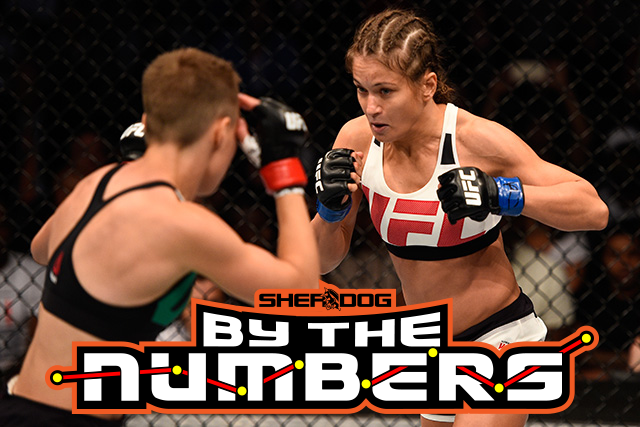 Karolina Kowalkiewicz sent a warning to the rest of the Ultimate Fighting Championship’s women’s strawweight division with lopsided victories over Felice Herrig and Jodie Esquibel. Among those at which the message was directed: reigning champion Rose Namajunas, a woman Kowalkiewicz defeated at UFC 201 a little more than two years ago. A rematch with “Thug Rose,” this time for the 115-pound title, remains in the back of the Pole’s mind ahead of her showdown with Jessica Andrade at UFC 228 on Saturday in Dallas.

A closer look at some of the numbers that have come to define Kowalkiewicz:

16: Years old when she started self-defense training. Before Kowalkiewicz shifted to muay Thai, she studied Krav Maga and became an instructor in the discipline. She often credits the Israeli fighting system for her success, claiming it was how she learned to use her elbows.

27: Years of age when she made her mixed martial arts debut. Kowalkiewicz at the time had her detractors, who claimed she was too old to start a career in MMA, much less reach the UFC.

1: Amateur fight on her resume. Kowalkiewicz experienced high-level opposition right from the start, as she submitted to a rear-naked choke from future UFC women’s strawweight champion Joanna Jedrzejczyk at an Amatorska Liga MMA event in 2012.

1: Round needed to subdue Marzena Wojas in her pro debut. Kowalkiewicz shut down Wojas with punches 3:12 after their match began.

5: Fights in which she participated under the Konfrontacja Sztuk Walki banner. Kowalkiewicz captured the KSW flyweight championship in June 2013, when she choked out Marta Chojnoska in the first round. She went 5-0 with the Polish promotion prior to signing with the UFC.

1: Appearance in Invicta Fighting Championships. It came against Japanese wunderkind Mizuki Inoue on Nov. 1, 2014 and marked Kowalkiewicz’s United States debut. She was awarded a split decision.

66: Significant strikes landed on Randa Markos at UFC on Fox 17, per FightMetric. Kowalkiewicz’s muay Thai exploits were on full display, as she outworked the Iraqi-born Canadian across three rounds to take home a unanimous decision in her Octagon debut.

84: Significant strikes landed against Namajunas in their July 30, 2016 encounter. “Thug Rose” answered with 70. The slight striking advantage was enough for two judges to side with Kowalkiewicz.

127: Significant strikes landed on Esquibel in a stellar performance at UFC Fight Night 118. Kowalkiewicz nearly doubled her opponent’s output (65) in the category.

2: Losses in the UFC. Kowalkiewicz dropped a decision to Jedrzejczyk in their rematch at UFC 205 and succumbed to a rear-naked choke from Claudia Gadelha at UFC 212.

3: “Fight of the Night” bonuses banked, the additional money spread across three different promotions. Kowalkiewicz was honored after her battle with Inoue at Invicta 9, her clash with Kalindra Faria at KSW 30 and her confrontation with Namajunas at UFC 201.

87: Percent of takedowns successfully defended in the UFC. Kowalkiewicz has conceded only five takedowns in her seven appearances inside the Octagon.