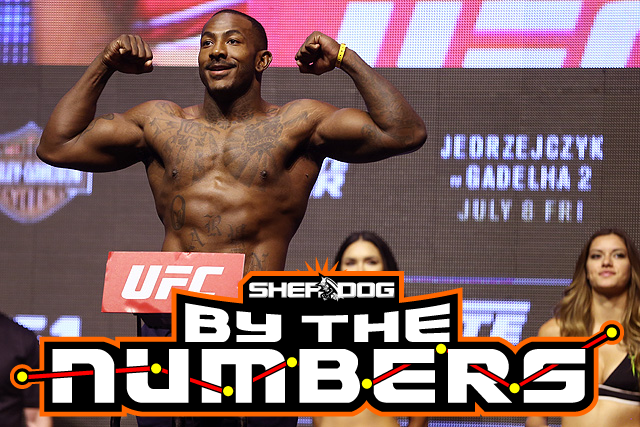 Khalil Rountree has shown himself to be one of the most down-to-earth fighters in the sport, so it seems unlikely that his upset of former Glory kickboxing champion Gokhan Saki would go to his head. Nevertheless, he made quick work of one of the light heavyweight division’s premier strikes.

In his latest assignment, Rountree finds himself pitted against another knockout artist, as he will face Johnny Walker at UFC Fight Night 140 on Saturday in Buenos Aires, Argentina. As Rountree prepares for his clash with Walker, here are some of the numbers that have accompanied his rise in the Ultimate Fighting Championship.

300: Pounds. There was a time when the well-built Rountree did not look much like the fighter we see today. His brother, then training at the Wand Fight Team gym, introduced him to MMA. Curious and wanting to shed off some weight, Rountree gave it a go and never looked back.

6: Victories without a loss as an amateur fighter in Tuff-N-Uff and King of the Cage. Rountree later turned pro and made his debut under the Resurrection Fighting Alliance flag.

4: Wins without a defeat in RFA. Rountree started as a light heavyweight and moved to a 190-pound catchweight before dropping to middleweight for his final two bouts with the organization.

2: Contestants defeated on Season 23 of “The Ultimate Fighter.” Rountree stopped Muhammed DeReese on a technical knockout during the elimination phase before submitting to a rear-naked choke from Cory Hendricks in the quarterfinals. However, a neck injury prevented Hendricks from advancing in the competition. Rountree replaced Hendricks and made the most of his second chance, knocking out Josh Stansbury in the semifinals.

2: Straight losses to start his UFC career. After the setback against Sanchez, Rountree faced Tyson Pedro, who choked him out a little over four minutes into their encounter at UFC Fight Night 101.

2: Finishes recorded in under one minute. Rountree has four first-round stoppages to his credit, and he posted two of them in in quick-strike fashion. He knocked out Blake Troop in 39 seconds at RFA 21 and Jolly in 52 seconds.

1: “Performance of the Night” award banked. His stunning knockout of Saki was a sight to behold, and the fact that needed less than two minutes to finish the job was even more impressive.

5: Wins by knockout. Rountree starched Troop and Justin Polenday before joining the UFC roster, then did the same to Jolly, Craig and Saki.