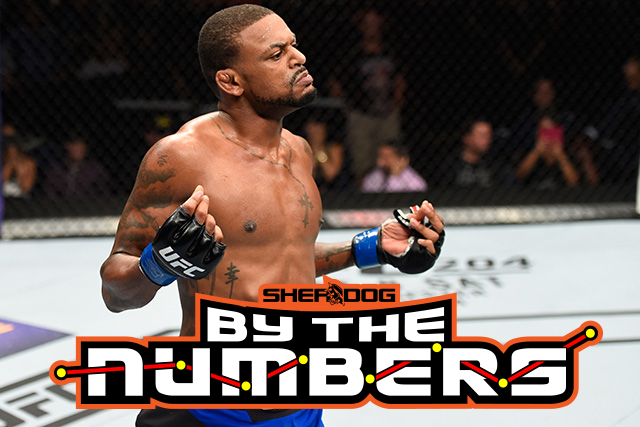 Michael Johnson finds himself on a three-fight losing streak and cannot afford another setback within the confines of the Ultimate Fighting Championship featherweight division.

As Johnson approaches his three-round clash with Fili, here are some of the numbers that have come to define “The Ultimate Fighter” Season 12 finalist:

10: Years as a professional mixed martial artist. Johnson made his debut at a FM Productions event in February 2008 and stopped Chauncey Prather with punches in just 72 seconds.

8: Wins on his ledger before the UFC took notice and cast Johnson on Season 12 of “The Ultimate Fighter” reality series. He was 8-4 at the time.

4: Fighters he defeated on his way to “The Ultimate Fighter 12” final against Jonathan Brookins. Johnson eliminated Pablo Garza, Aaron Wilkinson, Alex Caceres and Nam Phan before losing a unanimous decision to Brookins.

18: UFC appearances. Johnson rebounded from his loss to Brookins with a first-round technical knockout of Edward Faaloloto at UFC Live 4. Seven years later, he remains on the roster.

3: Rounds needed to defeat Ferguson at UFC on Fox 3 in May 2012. The unanimous decision allowed Johnson to showcase his improving standup skills.

67: Significant strikes landed against Ferguson, per FightMetric. “El Cucuy,” meanwhile was credited with only 45.

1: “Knockout of the Night” award. Johnson wiped out Danny Castillo with second-round punches at UFC on FX 5 in October 2012, picking up a $40,000 bonus for his efforts.

2: Submission victories on his ledger. Johnson secured both of them in regional competition, as he choked out Steve Schneider and tapped Clay French with a kimura.

1: “Performance of the Night” award. Johnson’s ground-and-pound finish of Poirier at UFC Fight Night 94 earned him a $50,000 post-fight bonus.

2: “Fight of the Night” bonuses. Johnson was rewarded in defeat following losses to Nate Diaz and Justin Gaethje.

9: Losses in the UFC. Johnson has always struggled with consistency, leaving him at .500 in the promotion.