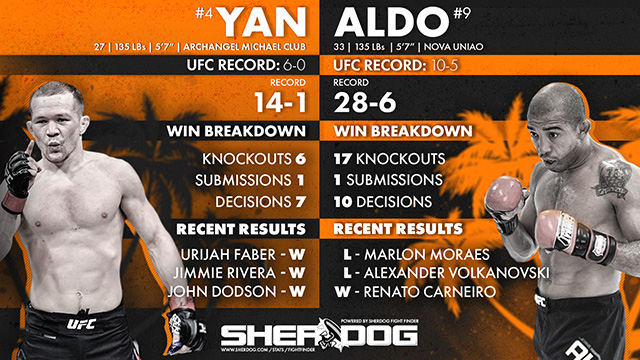 The fate of the vacant Ultimate Fighting Championship bantamweight title will be decided when Petr Yan meets Jose Aldo at UFC 251 this Saturday in Abu Dhabi, United Arab Emirates. They seek to fill the void left by former champion Henry Cejudo, who announced his retirement following a second-round technical knockout of Dominick Cruz on May 9.

Yan finds himself on a nine-fight winning streak that covers some four years. A Tiger Muay Thai and Archangel Michael Club representative who holds the Master of Sport designation in boxing and mixed martial arts, he last appeared at UFC 245 in December, when he cut down Urijah Faber with a third-round head kick. Aldo, meanwhile, enters the cage on the heels of back-to-back decision losses to Alexander Volkanovski and Marlon Moraes. Still regarded as one of the all-time greats, the Nova Uniao cornerstone started his career 25-1 and for years had a legitimate claim as the sport’s best pound-for-pound fighter.

As Yan and Aldo prepare for their high-stakes showdown, a look at some of the numbers that have accompanied them to this point:

47: Seconds required for Yan to dispatch Haron Orzumiev with a guillotine choke at an Absolute Championship Berkut event in May 2015. Still the only submission of his career, it remains his fastest finish to date.

6: Yan wins by knockout or technical knockout, accounting for 43 percent of his professional total (14). Included among them are UFC victories over the aforementioned Faber, Teruto Ishihara and Douglas Silva de Andrade.

226: Total strikes by which Yan has outlanded his six UFC opponents. That includes an 18-fight deficit in a unanimous decision over Jimmie Rivera at UFC 238.

9: Post-fight bonuses won by Aldo as a member of the UFC and World Extreme Cagefighting rosters. He has banked four bonuses for “Fight of the Night,” three for “Knockout of the Night” and two for “Performance of the Night,” resulting in $306,500 of additional income.