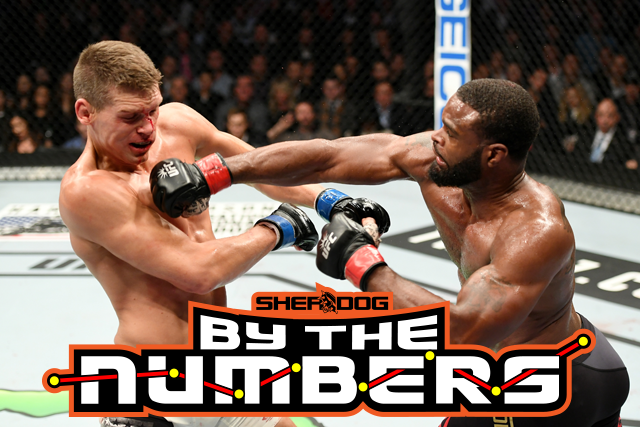 Tyron Woodley adheres to a game plan as well as any fighter in mixed martial arts, and while he has his detractors, few can argue with the fact that he has discovered a winning formula. “The Chosen One” will defend his Ultimate Fighting Championship welterweight crown for the fourth time in a stylistically dangerous showdown with the undefeated Darren Till in the UFC 228 main event on Saturday at the American Airlines Center in Dallas.

As their day of reckoning approaches, here are some of the numbers that have helped make Woodley the sport’s premier welterweight:

2: All-America selections as a wrestler at the University of Missouri. Woodley was honored in 2003 and again in 2005.

2: Fights on the regional circuit before he inked a deal with Strikeforce. Woodley struck Steve Schneider into submission at a Headhunter Productions event in February 2009 and tapped Jeff Carstens with a rear-naked choke under the Respect Is Earned flag a little less than three months later. He did his damage in 1:57 combined.

8: Straight victories to start his run in Strikeforce and set up a welterweight title showdown with Nate Marquardt. Woodley defeated Salvador Woods, Zach Light, Rudy Bears, Nathan Coy, Andre Galvao, Tarec Saffiedine, Paul Daley and Jordan Mein before being knocked out by Marquardt in the fourth round of their July 14, 2012 encounter.

22: Significant strikes landed against Josh Koscheck at UFC 167, per FightMetric. One of those punches dropped Koscheck and a 1-2 put him to sleep 4:38 into the first round, earning Woodley “Knockout of the Night” honors.

9: First-round finishes on his resume. Despite being criticized for what fans perceive to be a reserved fighting style, Woodley has stopped nine opponents inside one round.

2: “Performance of the Night” bonuses banked since he joined the Ultimate Fighting Championship roster. Woodley’s stoppage of Dong Hyun Kim at UFC Fight Night 48 and a title-winning finish on Robbie Lawler at UFC 201 earned him some additional cash.

1: Round required to unseat Lawler. Woodley saved a slow first round by landing a strong right hand that floored the champion. He followed with a few more punches to necessitate the stoppage 2:12 into Round 1 at Philips Arena in Atlanta.

3: Three successful title defenses. After snatching the welterweight belt from Lawler, Woodley’s first assignment as champion came against a surging Stephen Thompson, who battled him to a majority draw at UFC 205. Their rematch, while not as entertaining as their first encounter, took place at UFC 209, where Woodley retained his title with a unanimous decision. In his third appearance as champion, he again went the distance, this time posting a unanimous verdict over Demian Maia at UFC 214.

24: Takedowns stuffed against Maia, who went 0-for-24 on his attempts. It resulted in a one-sided affair that Woodley won going away.

1: “Fight of the Night” bonus earned. His initial meeting with Thompson -- a back-and-forth tussle in November 2016 -- was an easy choice for the honor.

2: Losses in the UFC. Both were by decision, as Woodley was outpointed by Jake Shields at UFC 161 and dropped a unanimous verdict to Rory MacDonald at UFC 174.