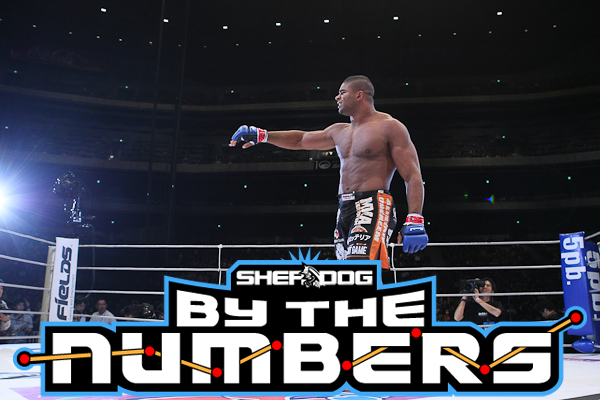 After facing Curtis Blaydes at UFC 225, Alistair Overeem gets another young gun with the debuting Sergey Pavlovich. “The Reem” aims to make a strong comeback when he meets the promising Russian this weekend at UFC Fight Night 141. As he prepares for their encounter at the Cadillac Arena in Beijing, China, take a look at the figures that define the career of this legendary Dutch kickboxer.

2: Fights with Peter Aerts. Overeem defeated his more experienced countryman twice, first at the final 16 of K-1 World Grand Prix 2009 and at the finals of the following year.

2: Fights with Hari. Overeem first fought Hari at Dynamite 2008, where “The Demolition Man” won by left hook KO. His rival made it even when they met at semifinals of K-1 Grand Prix 2009.

19: Years old when he made his professional mixed martial arts debut. It happened at an event called It’s Showtime: It’s Showtime in his native of The Netherlands. Overeem needed only 1:39 to choke out Ricardo Fyeet.

12: Fight winning streak was the longest in his career. That long stretch started with an Americana submission victory over Peter Verschuren on Dec. 12, 2000 at It’s Showtime: Christmas Edition and went on until Pride 26, where he tapped out Mike Bencic due to strikes. Chuck Liddell ended his happy days when he knocked Overeem out at Pride Total Elimination 2003.

14: Fights in Pride Fighting Championships. Overeem debuted impressively with a 44-second TKO triumph over Yusuke Imamura. He would go on to score impressive victories over Igor Vovchanchyn, Sergei Kharitonov and Vitor Belfort.

32: Significant strikes landed on Buentello, who could only tally three, in their Strikeforce encounter. With the win, Overeem claimed the inaugural Strikeforce heavyweight championship. The promotion ended with the belt still in the Dutch kickboxer’s waist.

4: Fights in Strikeforce and was undefeated. Apart from Buentello, he also beat Fabricio Werdum, Brett Rogers and once again, Belfort.

3: Titles held simultaneously. At one point, Overeem was a champion at Strikeforce, K-1 and Dream.

14: Fights in the UFC and has gone 8-6. During his entire stint in the Octagon, he was pitted only against top-quality opposition. Overeem beat Brock Lesnar, Frank Mir, Stefan Struve, Roy Nelson, Junior dos Santos, Andrei Arlovski, Mark Hunt and again, Werdum. His losses came at the hands of Antonio Silva, Travis Browne, Ben Rothwell, Stipe Miocic, Francis Ngannou and most recently Blaydes.

19: Seconds was his fastest finish. He knocked out Duffee quickly to capture the interim Dream heavyweight championship.

19: Years as a professional MMA fighter. He has 61 total fights to date, with stints at various promotions.