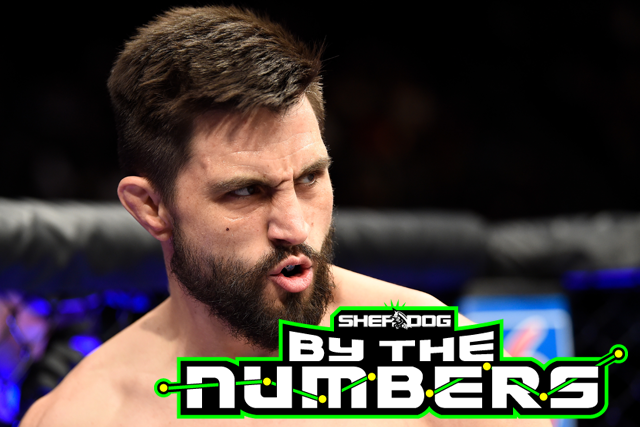 Carlos Condit is undoubtedly one of the top welterweights of the decade, which is why despite losing four straight, he is given a tough opponent in Michael Chiesa. “The Natural-Born Killer” will welcome Chiesa at 170 when they meet on Dec. 29 at UFC 232. As Condit tries to snap his losing skid, take at look at some of the figures that have made the Jackson-Wink MMA standout one of the most brilliant and entertaining fighters in history.

9: Years old when he started wrestling and it went on until high school.

4: Professional kickboxing fights with a record of 3-1, with two wins coming by way of KO or TKO. He also tried his hand at professional boxing once, losing a 4-rounder to Donnel Wade.

52: Seconds needed to choke out Nick Roscorla in his professional MMA debut in an event called Aztec Challenge 1. It was held in Ciudad Juarez, Mexico, on Sept. 6, 2002.

8: Wins without a defeat to start his career. Condit followed up his impressive debut with more thrilling finishes, all in the first round. His first loss came at the hands of fellow future Ultimate Fighting Championship fighter Carlo Prater, who submitted him via triangle choke in an event called FightWorld 2, also in the opening frame. He would later avenge that loss when they met for the second time in World Extreme Cagefighting.

5: Fights in the WEC, where he was the final welterweight champion. Condit captured the title by defeating John Alessio at WEC 26. He successfully defended it three times against Brock Larson, Prater and Hiromitsu Miura.

3: Full rounds in his Octagon debut at UFC Fight Night 18 opposite Martin Kampmann. It was a tightly contested bout, but in the end, Kampmann was awarded the split decision victory. They met again at UFC Fight Night 27, and this time, Condit won via TKO.

5: Consecutive victories after his loss to Kampmann, with victories over top-caliber opposition, such as Jake Ellenberger, Rory MacDonald, Dan Hardy, Dong Hyun Kim and Nick Diaz. It also marked the longest winning streak of his UFC career.

151: Significant strikes landed as opposed to NDiaz’s 105 in their battle for the UFC interim welterweight title. Condit stuck to his game plan and remained calm despite all the taunting from Diaz. After five rounds, he was awarded the unanimous decision victory.

2: Times he fought for the regular UFC welterweight title. Condit tried but failed to unify the welterweight titles against Georges St. Pierre at UFC 154. He was given another opportunity at UFC 195, and this time, the belt was held by Robbie Lawler. Condit outstruck his opponent 176-92, but was denied the victory in a hotly-contested decision.

2,287: Significant strikes landed in his entire career, according to Fightmetric. The kickboxing powerhouse has 15 wins by KO or TKO.