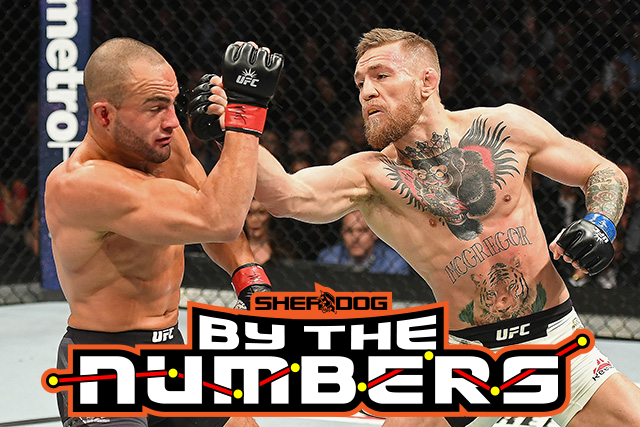 Conor McGregor is back and ready to face reigning 155-pound king, Khabib Nurmagomedov. “The Notorious” is coming off a near two-year Octagon layoff and will look to prove he still rules the division. The spectacle unfolds Saturday at UFC 229 in Las Vegas.

Before the highly-anticipated match comes to fruition, read about the numbers that have come to define the sensational Irishman’s combat sports career.

12: Years old when he started boxing at Crumlin Boxing Club. McGregor also engaged in other sports, including soccer.

18: Years old when he fought in the amateur ranks. He scored a first-round TKO over a guy named Kieran Campbell. On the strength of his impressive victory, he was signed by Dublin-based promotion, Cage of Truth.

9: Years as a professional mixed martial artist. In his pro debut at Cage of Truth 2, McGregor TKO’d Gary Morris and repeated the feat against Mo Taylor to start his career with a 2-0 record.

1: Round needed to defeat Aaron Jahnsen in McGregor’s first fight outside of Ireland. The event, Cage Warriors: Fight Night 2, happened in Amman, Jordan.

14: Fights in other promotions before the UFC took notice. It wasn’t until 2013 when he was signed by the premier league.

67: Seconds needed to stop Marcus Brimage in McGregor’s Octagon debut. He finished the American with a barrage of punches in their confrontation at UFC on Fox 9.

2: Times stripped of the title in the UFC. McGregor won and unified the UFC featherweight championship at the expense of Jose Aldo, but then the Irishman moved up to welterweight and stayed there. This prompted the UFC to strip him of his featherweight belt in November of 2016. At UFC 205, he snatched the lightweight belt from Eddie Alvarez and was again stripped because of inactivity.

2: Losses in his first six fights. McGregor didn’t look as invincible in the UFC prior to the Nate Diaz loss as he was in his early years. He was tapped out by Artemij Sitenkov at Cage of Truth 3 and by Joseph Duffy at Cage Warriors 39. These two early losses revealed his weakness on the ground.

15: Straight wins after the loss to Duffy. Seven came in the UFC, where he beat high-level fighters like Max Holloway, Dustin Poirier, Chad Mendes and Jose Aldo.

3: Losses by submission. Apart from the aforementioned early losses, he was also tapped out by Diaz.

3: Divisions fought in. McGregor has fought at welterweight, lightweight and featherweight.

5: Consecutive Fight of the Night awards, a UFC record. In all, he has earned six, with excellent performances over Poirier, Mendes, Aldo, as well as Diego Brandao, Dennis Siver and Alvarez.

2: Fight of the Night awards, both of which he shared with Diaz. McGregor suffered his first UFC loss to Diaz at UFC 196, but managed to redeem himself at UFC 202.