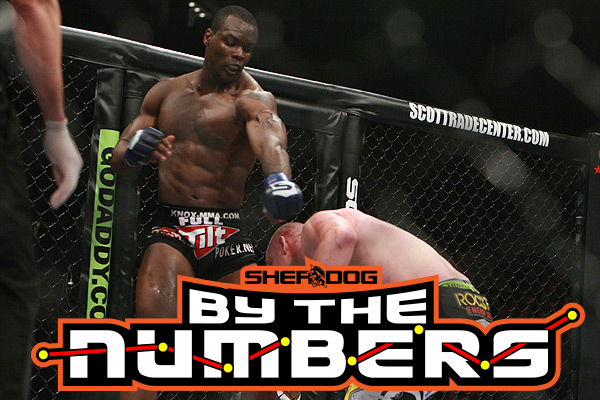 Ovince St. Preux bounced back from his loss to Ilir Latifi by submitting Tyson Pedro in the opening round. At UFC 229, he will look to make it two in a row when he faces Dominick Reyes in Las Vegas on Oct. 6. Reyes is an undefeated prospect with three straight wins in the Ultimate Fighting Championship.

Before any questions can be answered, here are a few numbers attached to St. Preux’s tenure:

2: Defeats to start his professional career. He lost to Wallace and Ray Lizama, both by decision.

3: Straight wins to get back on track. After the two losses, he piled up three finishes, one of them via a rare calf slicer.

8: Fights before Strikeforce took notice. Despite a mediocre 4-4 record, the promotion saw his potential.

47: Seconds to starch Chris Hawk and impress fans in his Strikeforce debut. This was followed by six more wins.

3: Full rounds against his first big-name opponent, Gegard Mousasi. St. Preux asserted himself well, despite losing by unanimous decision in the back-and-forth war.

6: Victories in seven bouts under the Strikeforce banner, and UFC took notice. His Octagon debut ended in a technical decision win following an accidental eye poke that rendered Gian Villante unable to continue.

4: Straight wins in the UFC before Ryan Bader stopped him in his tracks at UFC Fight Night 47. According to Fightmetric, they tallied 24 significant strikes apiece. However, Bader was able to score nine takedowns while St. Preux forced only two.

5: Wins by decision. In all his career wins, St. Preux went the distance only five times.

11: Wins by KO or TKO. In the UFC, he beat Cody Dovovan, Mauricio Rua, Patrick Cummins and Corey Anderson either by kick or punches.

3: Submission finishes by Von Flue choke. St. Preux still holds the record for being the only fighter in UFC history to get taps three times using this rarely seen submission.

4: Victories in under a minute. He submitted Jonathan Smith in 46 seconds, stopped Chris Hawk in 47 seconds, knocked out Jason Day in 8 seconds and wrecked Rua in 34 seconds.