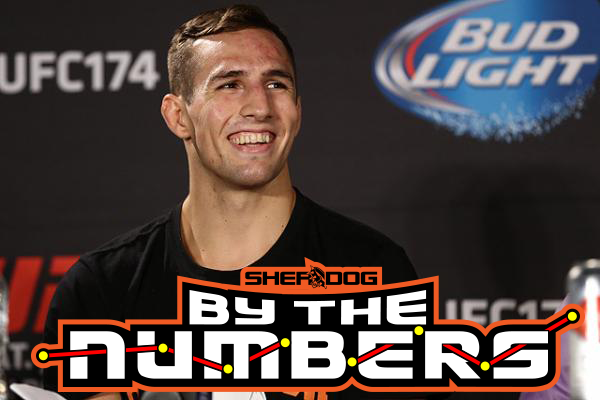 After snatching the Bellator MMA welterweight title from Douglas Lima in January, Rory MacDonald has his eyes set on the 185-pound strap recently won by Gegard Mousasi. The two newly-minted champions are set to collide at Bellator 206 this weekend at the SAP Center in San Jose, California.

Style-wise, they are pretty similar, which makes for an interesting money fight. Before we see who controls who with his jab, pressure or ground game, here are some of the numbers that have elevated the Tristar Gym standout to the top of the sport.

16: Years-old when he debuted professionally in October 2005. MacDonald submitted Terry Thiara in the first round at an event called Extreme Fighting Challenge 4.

10: Straight victories to start his career. Along the way, MacDonald faced future Ultimate Fighting Championship stars Jordan Mein and Kajan Johnson. Before getting signed by the UFC, he spent most of his time in King of the Cage Canada.

7: Seconds left on the clock when referee Kevin Doman stopped the fight, giving Carlos Condit the win and MacDonald the first loss of his young career.

5: Consecutive wins after the loss to Condit, and he did it against quality opponents, such as Che Mills, Mike Pyle, Jake Ellenberger, Nate Diaz and B.J. Penn.

2: Fights with Robbie Lawler. They first met at UFC 167, where Lawler earned a split decision victory. Their rematch at UFC 189 was for the welterweight belt, and this time, the American made sure not to leave it at the hands of the judges. He knocked out MacDonald in the final round.

116: Significant strikes against Penn's 24, per Fightmetric. MacDonald handed the former lightweight titleholder perhaps the most one-sided beating of his career at the time.

1: Back-to-back losses in his career. After losing his bid for the title, MacDonald tried to bounce back in his next bout, but Stephen Thompson would deny him. The Canadian suffered a decision loss in front of his countrymen at UFC Fight Night 89.

14: Career finishes. In all of his victories, MacDonald has only went the distance six times.

3: Fight of the Night awards he shared with Condit, Lawler and Demian Maia. His title fight with Lawler was awarded Fight of the Year in 2015 by multiple outlets, including Sherdog.

1: Performance of the Night bonus. He delivered another excellent performance, this time against Tarec Saffiedine, knocking out the Belgian in round 3 of their UFC Fight Night 54 clash.