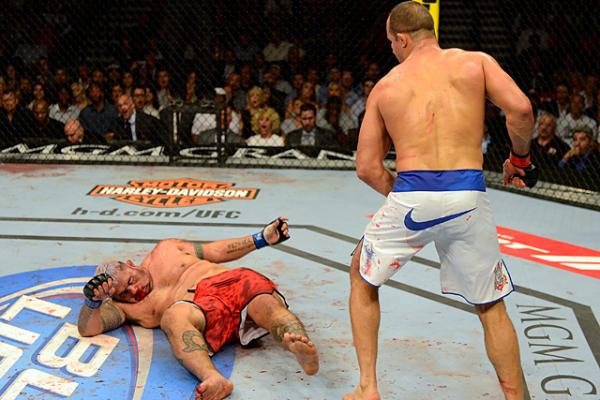 
They took different routes to victory on Saturday night, but Cain Velasquez and Junior dos Santos appear to be on a collision course for a third meeting at some point in 2013. Velasquez, the reigning heavyweight champion, dispatched Antonio Silva in timely fashion in their rematch, stopping the massive Brazilian with strikes 1:21 into the opening round of the UFC 160 main event.

Meanwhile, dos Santos engaged in a thrilling battle with the heavy-handed Mark Hunt in the evening’s co-headliner, flooring the “Super Samoan” twice en route to earning a tension-filled technical knockout victory at the 4:18 mark of round three. The records show that Velasquez and dos Santos are 1-1 in head-to-head meetings, so a trilogy only makes sense. Here is a by-the-numbers look at UFC 160, with statistics courtesy of FightMetric.com.

.580: Career significant striking accuracy for Cain Velasquez, tying him with Randy Couture for No. 5 all-time in the UFC. The American Kickboxing Academy product landed 18 of 28 significant strikes in his victory over Silva.

5: Total strikes landed by Silva in two losses to Velasquez. The Brazilian was outlanded 18 to 2 on Saturday and 53 to 3 at UFC 146.

2: Knockout losses in 17 professional MMA bouts for Mark Hunt, who was stopped by a spinning hook kick from Junior dos Santos in the UFC 160 co-headliner. Hunt’s only other knockout loss came at the hands of Melvin Manhoef in 18 seconds at a K-1 Dynamite “Power of Courage” on Dec. 31, 2008.

11: Career knockdowns for Junior dos Santos, tying him with Lyoto Machida for No. 4 all-time in the UFC. “Cigano” landed two knockdowns in his victory over Mark Hunt. File Photo
Teixeira is steamrolling competition.
13: Combined takedown attempts in the Octagon careers of dos Santos and Hunt. Dos Santos attempted -- and landed -- the only takedown of their heavyweight matchup.

19: Consecutive victories for Glover Teixeira, who improved to 4-0 in the UFC by submitting James Te Huna with a guillotine choke 2:38 into the first round of their light heavyweight bout.

5-0: Record for T.J. Grant since dropping from welterweight to lightweight. Grant, who is expected to receive a 155-pound title shot against reigning champion Benson Henderson, was 3-3 at 170 pounds.

4: Takedowns landed by Donald Cerrone against K.J. Noons, the most in his 19-fight tenure in the UFC and WEC. Cerrone’s previous best of three takedowns landed came on three separate occasions: vs. Ed Ratcliff at WEC 45, vs. Jamie Varner at WEC 51, and vs. Paul Kelly at UFC 126.

41: Total strikes by which Rick Story outlanded Mike Pyle in the first round of their 170-pound meeting. Story nearly finished the bout with heavy punches in the opening frame, but Pyle survived to earn a split-decision triumph.

12: Significant strikes by which Dennis Bermudez outlanded Max Holloway in the third round of their featherweight encounter. Bermudez also went 3-for-3 on takedowns in the frame, helping the “TUF 14” alum earn a controversial split-decision victory. Holloway outlanded Bermudez 51 to 37 in significant strikes in rounds one and two combined.

21: Takedowns landed, in 27 attempts, by Khabib Nurmagomedov in his unanimous decision triumph over Abel Trujillo. The American Kickboxing Academy product was at his most prolific in round three, when he landed nine of 11 takedowns.

0: Takedowns landed, in 13 attempts, by Nurmagomedov in the last bout where he attempted at least one takedown, a unanimous verdict over Gleison Tibau at UFC 148.

553: Days since Brian Bowles’ last Octagon appearance, a second-round submission defeat to Urijah Faber at UFC 139. The former WEC bantamweight champion also had a 362-day layoff from 2010 to 2011. The Hardcore Gym representative fell to George Roop via second-round TKO on Saturday.