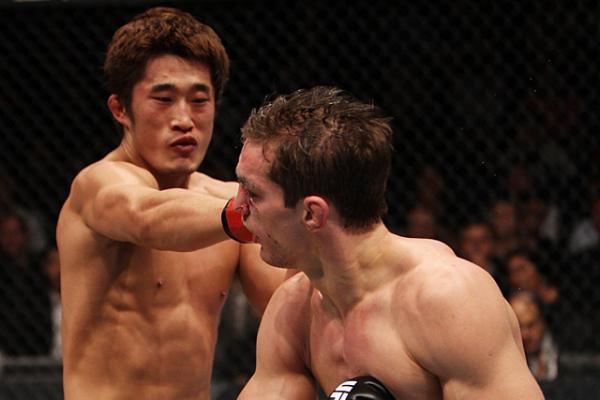 
In his last two UFC appearances, Dong Hyun Kim has gone from a smothering grinder to a whirling dervish of violence. The transition has been spectacular. Kim knocked out John Hathaway with a vicious spinning back elbow in the UFC Fight Night 37 headliner at the Cotai Arena in Macau, China, on Saturday, his second consecutive knockout in the UFC after previously going five-plus years without a stoppage inside the Octagon.

While Kim’s new style may be difficult to maintain as he ascends the welterweight ladder, it certainly has raised his profile within the division. Here is a by-the-numbers look at UFC Fight Night 37, with statistics courtesy of FightMetric.com.

1,964: Days between Kim’s first (UFC 84) and second (UFC Fight Night 29) KO victories in the UFC. However, the Korean’s third knockout triumph in the Octagon came just 143 days after he finished Erick Silva in Brazil.

6: KO/TKO victories for Kim in his first 10 professional bouts before signing with the UFC. After Saturday, he has three KO victories in 13 Octagon outings.

7: Consecutive fights to go the distance for Hathaway prior to his third-round knockout loss to Kim. Before Saturday, the last time a bout involving “The Hitman” finished inside the distance was at UFC 93, when he scored a first-round technical knockout over Tom Egan.

1,057: Total strikes landed by Hathaway in nine UFC bouts, which includes an unofficial total of 47 strikes that hit their mark versus Kim. It was only the second time Hathaway failed to land more than 100 total strikes in UFC competition. His career best of 239 came in a decision victory against Paul Taylor at UFC 105.

519: Days since Hathaway’s last UFC appearance, a three-round verdict over John Maguire at UFC on Fuel TV 5 in September 2012. Hathaway also recently had a 406-day layoff between a win over Kris McCray at UFC Fight Night 24 and a triumph over Pascal Krauss at UFC on Fox 3.

1: Media scorecard among the 10 tracked by MMADecisions.com that scored the “TUF: China” welterweight final for Lipeng Zhang, who captured a split decision (29-28, 27-30, 29-28) over Wang Sai. The other nine media scorecards had it 29-28 in favor of Sai.

5:36: Average length of Matt Mitrione’s six KO/TKO victories in the Octagon. “Meathead” knocked out Shawn Jordan at the 4:59 mark of the opening round of their heavyweight clash on Saturday. Mitrione has gone the distance just once in victory, when he outpointed Joey Beltran at UFC 119.

2:09: Average length of Jordan’s four career knockout losses as a professional. His loss to Mitrione was by far the longest of those setbacks, as “The Savage” also has 93-, 73- and 51-second KO defeats in his 21-bout tenure.

7,966: Distance, in miles, from Mitrione’s hometown of Indianapolis to Macau, China.

22: Combined submission victories in the careers of Hatsu Hioki (12) and Ivan Menjivar (10). However, neither was able to secure a tapout in a matchup Hioki ultimately won via unanimous decision.

2: 10-8 rounds -- one each for Yui Chul Nam and Kazuki Tokudome -- awarded by judge Chris Watts in Nam’s split-decision victory. Watts scored the lightweight bout 28-27 in favor of Tokudome.

4: Two-fight losing streaks in the 31-bout career of Nam Phan. The 30-year-old bantamweight had never lost three in a row prior to UFC Fight Night 37, but that changed after the Vietnamese-American lost a lopsided unanimous decision to Vaughan Lee.

100: Percentage of Phan’s bouts inside the Octagon that have gone the distance. Phan is 2-6 in those contests and 6-10 in bouts that go to the judges overall.

19-8-1: Combined won-loss record of Honggang Yao, Irshaad Sayed and Longyun Jiang, the only three opponents with winning records Jumabieke Tuerxun had faced prior to Saturday. Teurxun owns two victories over both Yao and Sayed. Mark Eddiva, who outpointed Tuerxun in the card’s opening bout, was the fourth “Wild Wolf” adversary to have a winning mark.

4-20-1: Combined won-loss record of the nine foes who account for Teurxun’s nine other professional victories outside the Octagon.

7: Fighters of the 16 competing on Saturday’s card that were making their promotional debuts. That figure would have been 10 out of 20, but two fights featuring three more debutantes were removed from the event within the past week.