LAS VEGAS -- Donald Cerrone almost proved his own worst enemy in the main event of WEC 45 on Saturday, but in the end used a rear-naked choke to ensure he remains firmly in the mix in the promotion’s lightweight title picture.

In a thrilling three-round war against Ed Ratcliff, Cerrone cranked close submissions in each round, the third time being the charm. A rear-naked choke drew the third-round tapout at 3:47 on the final card from WEC in 2009.

Cerrone entered the final frame unsure if his winning work on Ratcliff in the first two rounds lent him any security on the scorecards. He was deducted a point in the first and second rounds for knees to Ratcliff’s groin, leaving the fight 18-18 going into the final round according to the judges’ scorecards obtained afterward by Sherdog.com.

“I had no choice but to finish,” Cerrone said.

And finish he did, dragging the Tae Kwon Do black belt to the ground and maneuvering into an interesting triangle choke/kneebar combination that Ratcliff showed great heart in withstanding.

Cerrone kept on the pressure, however, synching the fight-ending choke for the win to a thunderous response from the crowd on hand at the Palms Casino Resort.

“I ain’t making no excuses,” Ratcliff said. “He did what he was supposed to do.”

Cerrone was apparently thinking submission from the outset, rushing Ratcliff at the opening bell for a clinch and takedown attempt. Ratcliff shook it off and proceeded to jolt Cerrone into war mode with an impressive array of strikes, one of which quickly buckled the war-tested Greg Jackson pupil.

Ratcliff looked to tire in the second round, allowing Cerrone to pile on body kicks. He had a standing anaconda choke synched at the close of the round. In addition to the groin strikes, referee Herb Dean admonished Cerrone for grabbing the fence to gain position and attain a mount. 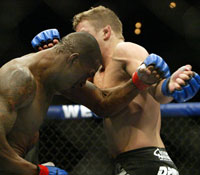 Anthony Njokuani co-opted the WEC debut of former International Fight League poster boy Chris Horodecki for his own personal highlight reel, hunting down the Canadian with a running head kick that crumbled him on the cage. With Horodecki left prone for follow-up shots, referee Steve Mazzagatti was compelled to step in and declare the TKO.

"He just turned his back and I saw the opening and I went for it," said Njokuani, 29. "I'm always going to get better, because that's what I do."

Horodecki was active with combinations in the one-rounder, but had trouble touching Njokuani, who enjoyed a six-inch reach advantage. Horodecki decided to close the distance but got thrown and mounted. He then scrambled to his feet and turned and ran to create distance. This allowed Njokuani, in hot pursuit, to launch the head kick.

The loss is the second for the 22-year-old Horodecki, who has had four training camps this year but only fought once due to fight cancellations and a neck injury. Njokuani is now a factor in the WEC lightweight title picture.

Joseph Benavidez bounced back nicely from his first career loss by notching his first finish in WEC against Rani Yahya. The stout Team Alpha Male fighter landed a crushing right hook in the first round to drop jiu-jitsu specialist Yahya, and rained down punches until referee Kim Winslow stepped in to stop the fight.

Benavidez was asked about a potential fight with Miguel Torres, who will return to action at WEC 47 on March 6. 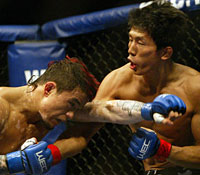 Scott Jorgensen enjoyed vocal crowd support and a good measure of striking and grappling control in the first two rounds against Takeya Mizugaki, notching in a unanimous decision victory that puts him at the doorstep of a bantamweight title shot. “I’m coming,” Jorgensen said when asked about facing the winner of the March 6 135-pound title fight between Brian Bowles and Damacio Page.

The Utah native and three-time Pac 10 wrestling champion started off in explosive fashion, landing a wide right hook that knocked the Shooto veteran out of sorts. Mizugaki recovered with some tight punching combinations, but Jorgensen swarmed him again with punches at the close of the round.

The mohawked Jorgensen switched to his wrestling in the second round, taking Mizugaki down solidly three times. He was forced to work from the bottom in the third, following an emphatic judo throw from Mizugaki. He took the fight 29-28 on all three judges’ scorecards.

"That’s always my game plan, to get the upper hand early,” Jorgensen said. “That’s what I do.”

Mizugaki, who needed two trips to the scale to make the 136-pound limit Friday, is now 2-1 in his WEC campaign. Former champion Miguel Torres has expressed interest in a rematch with Mizugaki of their fight-of-the-year candidate from April.