Randy Couture is looking to lighten his load.

The UFC Hall of Famer said he’s leaning toward dropping from heavyweight back down to the UFC’s light heavyweight division, where Couture clinched the title (and its interim version) on three separate occasions.


Advertisement
“Maybe this year, or maybe the first of next year,” said Couture of his next bout. “I haven’t really looked at the cards and the shows that they have. What’s on the schedule, I don’t know, but I’m especially leaning towards dropping down. I’m pushing in weight. It would be easy for me to make 205 and there’s more interesting fights there right now.”

The choice appears to be Couture’s to make. UFC President Dana White told reporters Saturday following UFC 102 that he’d welcome bouts for the 46-year-old legend in both divisions, though White made his preference clear.

“I’d love to see him at light heavyweight, but he proved he can hang with heavyweights,” said White. “He’s had probably the best fight against Brock Lesnar, other than Heath Herring, since Lesnar’s been in here. I think he’s a monster at light heavyweight. It’s up to him, to be honest with you. Whatever he wants to do, I’m in.”

Couture announced on Saturday that he’d renewed his contract with the UFC for seven bouts over 28 months. The new contract was drafted and signed hours before Couture’s 20th Octagon appearance, and included the Nogueira bout. Sources have indicated to Sherdog.com that Couture’s new deal pays him six times more per fight guaranteed up front, along with a percentage of the pay-per-view sales profit.

“They’re taking care of me very well, and they have since I came back,” said Couture, who left the promotion for 11 months in 2007 over a contract dispute. “The pay-per-view deal that I had, with this last contract, was good and took care of me as well. I don’t have any complaints there.” 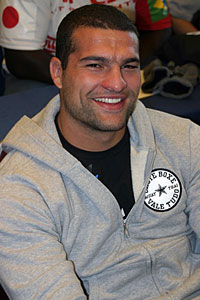 Stephen Martinez/Sherdog.com
A host of interesting fights await
Couture at light heavyweight.
Couture weighed in at a relatively svelte 220 pounds for his bout with Antonio Rodrigo Nogueira last Saturday at UFC 102 in Portland, Ore. Nogueira knocked Couture down in the first and third rounds and tied the veteran wrestler up with an array of submission attempts en route to a unanimous decision.

The move would be Couture’s third between the heavyweight division, where he began his career in 1997, and the 205-pound ranks. Couture, a three-time All-American for the famed Oklahoma State University, wrestled at 190 pounds and competed internationally at 198 pounds for 16 years.

A plethora of potential matchups await Couture in the division, from Keith Jardine to Mauricio "Shogun" Rua to champion Lyoto Machida.

The decision might also ensure the four-time Olympic alternate never rematches Lesnar, who finished Couture with second-round ground strikes at UFC 91 last November to earn the heavyweight title in only his fourth career bout.

The only obstacle for Couture now might be his flourishing acting career.

Couture said he’s under consideration for two action film projects, either of which could materialize with an offer in the next couple for weeks.

“That would put me in work very quickly this month or next month,” said Couture.

In that scenario, Couture said he would aim to fight again in the beginning of 2010.

Couture also has a supporting role alongside action stars Jason Statham and Jet Li in Sylvester Stallone’s “The Expendables,” due out in April.

“It’s a constant juggling act with all the stuff that I’m doing, so I’ll have to get plenty of notice for fights and when I get a fight that comes on the radar that’s interesting, I shut everything else down for that nine or 10-week period,” said Couture. “Right now, none of the movie deals are inked, so I don’t know what’s going to be real and happen and what’s not.

“I realize at this stage in my career that I can’t fight forever, so it’s not logical for me to put the movie stuff on hold,” added Couture. “I have too many opportunities and options right now.”
Related Articles
Latest News
ALLUFCBELLATORPFLONE