SUNRISE, Fla. – “I guess I should thank Ken Shamrock.”

With that, life after Kevin Ferguson began for Seth Petruzelli, the former full-contact karate champion who tore down the legendary street-fighter’s mystique in 14 magical seconds at EliteXC “Heat” on Saturday at the BankAtlantic Center.

A last-minute main event replacement for Shamrock -- who was forced out of the fight after he suffered a cut over his left eye during a light pre-fight workout -- Petruzelli seized the opportunity and launched himself upon a national television audience on CBS.

Once it was learned Shamrock would not be medically cleared to compete, EliteXC officials scrambled to find a suitable replacement. Originally scheduled to face Aaron Rosa, Petruzelli was the only man considered for the job, according to EliteXC Head of Fight Operations Jeremy Lappen.

“I got a call from Ken Shamrock’s attorney, who told me Ken had been cut warming up, and that he thought the fight was in jeopardy,” Lappen said. “Obviously, that’s not the kind of call you want to get. Everybody was here to see Kimbo fight. Our biggest guys on the undercard were Seth Petruzelli and Aaron Rosa. We made the best of the situation. Seth was man enough to step up and take the opportunity.”

Undefeated through his first three professional bouts, two of which lasted less than a minute, Slice had emerged as EliteXC’s most recognizable figure and the centerpiece for two of its first three telecasts on CBS. Ferguson stalked Petruzelli from the opening bell, and it was a piece of foolhardy strategy he lived to regret.

“I felt like there was a truck coming after me,” Petruzelli said. “I thought, ‘Oh, crap.’” 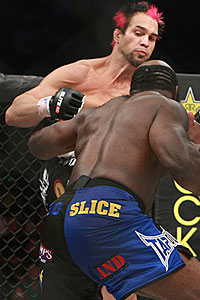 Dave Mandel/Sherdog.com
EliteXC's hopes for Kimbo Slice
were dashed with a short right
hand from Seth Petruzelli.
Petruzelli retreated towards the cage, created some distance between himself and the oncoming Slice with a front kick and landed a short right hand that dropped the bearded brute to his knees. A quality finisher, he followed with a series of unanswered strikes and forced the stoppage. Just like that, the bull in the china shop was caged.

“That right just came,” Petruzelli said. “I caught him in the right spot, and he went down. I smelled blood and just went after it.”

Petruzelli, who hours earlier was just another name on the undercard bout sheet, still has never been knocked out in mixed martial arts competition. A former heavyweight who transitioned to 205 pounds after his appearance on “The Ultimate Fighter” reality series, Petruzelli indicated he would welcome a rematch with Slice.

“If he ever wanted a rematch, I would 100 percent give it to him,” Petruzelli said. “I’d probably come in 20 pounds heavier and wouldn’t have to cut all that damn weight.”

Slice emerged from behind a curtain well after the post-fight press conference began, his eyes hidden by dark sunglasses. He had little to say about his performance and took no questions from reporters. The 34-year-old departed after making a brief statement and embraced Petruzelli as he left.

“I don’t feel too, too bad about it,” Slice said. “I got my first black eye in my life. This man knocked me out in front of my family. That’s f--ked up.”

Where the loss leaves Slice inside EliteXC is anyone’s guess. Lappen appeared lukewarm when it came to revisiting a potential bout with the 44-year-old Shamrock, who has not won a fight since 2004. Lappen clung to hope that Slice could regain at least some of his pre-Petruzelli luster.

“I think Kimbo’s a huge star,” Lappen said. “All the guy’s ever said is that he would fight anyone, anytime, any place. He never said he was the best. What happened to him [Saturday] is nothing new to MMA. It’s happened to the best fighters out there. He will learn from this. This guy has a lot of potential. I think someday you’ll see him as a world champion.”

Lappen teased an upcoming match between female MMA superstar Gina Carano and Brazilian wrecking machine Cristiane “Cyborg” Santos, though he stopped shy of an official commitment. Both women were dominant in victories at “Heat.” 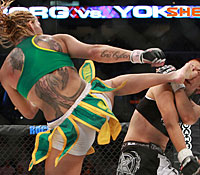 Dave Mandel/Sherdog.com
All signs point to a showdown
between Carano and "Cyborg."
“Details to come soon,” Lappen said with a smile.

Carano battered the game but outmatched Kelly Kobold en route to a unanimous decision over the spunky Minnesotan. The win kept Carano undefeated through seven bouts and set the table for a potential showdown with Santos for the vacant EliteXC women’s championship.

“It would be an honor to fight Cyborg … whenever it comes -- next, hopefully,” Carano said. “I’ve got to get back in the gym and get better at some technique. I see the fight with Cyborg being a tough fight, and I want to see where I’m at with it.”

Cyborg, meanwhile, hammered away at Japanese pioneer Yoko Takahashi with an onslaught of relentless violence. Though she could not finish her foe, the Brazilian brought the crowd to its feet with her strikes and classic Chute Boxe Academy killer instinct. She kept her comments on Carano brief.

International Fight League heavyweight champion Roy Nelson called the officiating in his match with Andrei Arlovski into question after the Belarusian stopped him with a two-punch combination in the second round. Nelson pointed to a questionable decision to stand up the fighters while he was in top position in round one.

Arlovski’s stock continues to rise, as he moves ever closer to a possible big-money bout with Fedor Emelianenko. A winner in five straight, he has stopped his last three opponents; that list now includes Nelson, who had never been finished before.

“Roy’s a tough fighter,” Arlovski said. “I have a lot of respect for him. He’s heavy; he’s strong. I honestly don’t remember what I did. I just remember when the referee stopped the fight.”

Nelson wants another crack at Arlovski.

“I would like to fight Andrei again,” he said. “If we fought 10 times, I think I’d win at least half of them.”

EliteXC officials announced a total paid attendance of 7,732, which resulted in an $826,433 gate for the company … the usually brash Paul Daley was uncharacteristically humble following his second-round submission loss to EliteXC welterweight champion Jake Shields. “He didn’t have to fight me,” Daley said. “I’m pretty much a nobody. He deserves to be champion.” Daley was the first fighter since Steve Berger in September 2006 to drag Shields into a second round … Benji Radach’s second-round TKO victory over former EliteXC middleweight champion Murilo “Ninja” Rua likely thrust him into title contention in the promotion’s 185-pound division. He has won six of his past seven fights -- all six by stoppage -- since he missed nearly three full years of action with various injuries. Only two other middleweights, Denis Kang and Robbie Lawler, had finished Rua before Radach; only Kang did it quicker.