Frank Shamrock always has an opinion. Since returning to the mixed martial arts scene on a full-time basis, Shamrock’s appearances have included work inside the commentary booth for EliteXC shows carried on CBS.

A man who prides himself on his belief in the sport he helped pioneer, Shamrock offered more opinions on EliteXC “Heat,” which featured Seth Petruzelli’s stunning technical knockout victory over Kevin “Kimbo Slice” Ferguson last Saturday in Sunrise, Fla.

“I think it was a mistake to not let me fight [Kimbo Slice],” said Shamrock, who claims he offered to step in to face the notorious streetfighter.

Expectations were high for “Heat,” as Slice was set to take on MMA legend Ken Shamrock, Frank’s older adoptive brother. However, a laceration above Ken’s eye left the Florida State Boxing Commission with no choice but to force him to withdraw. Frank believes his presence in the cage would have proven invaluable.

“When I realized we would have to cancel the show, I said, ‘Look, I’ll fight the guy. You know, it’s a great story -- little brother steps into the spot, comes out of the booth. It’s very compelling, but we need a fight to happen that’s compelling,’” Frank said. “That went around for hours. Then I put my shirt on and went to work. No one committed to it, so I just kept talking.”

Frank, the former Strikeforce and UFC middleweight champion, lobbied the CBS staff. He even claims to have been cleared to fight Slice as a heavyweight by the commission, but the match never materialized for reasons unknown to him. The result was disastrous for EliteXC, if you ask Frank.

“Kimbo is great, great for ratings,” he said. “But Kimbo fighting a star, a superstar, somebody who’s going to elevate him or knock him down in a good way … that’s what we needed that night. We didn’t need a nobody to beat Kimbo.”

Petruzelli disposed of Slice in 14 seconds. Despite a stint on “The Ultimate Fighter” reality show, he lost both his fights in the UFC and entered his showdown with Slice after nearly a yearlong layoff.

Frank believes Petruzelli’s lack of commercial appeal made the fight “a 50 million dollar mistake” instead of the birth of a new star.

“Everybody knows that Kimbo [Slice] is not very good,” Frank said. “He hasn’t had time to mature. He’s a new guy.”

While the fight made the underdog Petruzelli the “happiest man in the world,” it revealed much more about Slice, who gained notoriety and a cult following through backyard brawls that made their rounds on YouTube.

If Slice had lost by submission or decision, his handlers could have blamed it on inexperience. Instead, Petruzelli dropped him with a jab, a fact that deflated Slice’s iron-chinned, knockout artist persona. 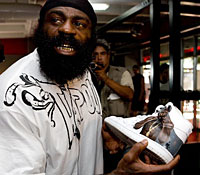 Slice’s ability to draw fans remains an undeniable positive for EliteXC. However, Frank views the hulking Floridian’s fan base -- casual fans drawn more to the man than the sport -- as fickle and dangerous.

Frank spends much of his time ensuring stability in his own career. What happened at “Heat” could play a huge role in shaping the next year for the soon-to-be 36-year-old.

“The whole show was about laying the ground for [Frank] Shamrock versus [Ken] Shamrock,” he said.

On an extended losing streak, Ken’s ability to sell the long-rumored bout with his brother has become questionable at best. Frank picked Ken to defeat Slice and build momentum for a match between them, but the elder Shamrock’s withdrawal from the fight may have derailed their big-money bout for good.

Promoting the fight on CBS seems completely out of the question, as the network was “not happy” with Ken, who has not won since 2004.

“The worst thing that could have ever happened was [for] Ken not get in the ring,” Frank said. “Two and a half years for me, I’ve been working on this once-in-a-lifetime event. If it doesn’t happen, it’ll be terrible for everybody, I think.”

Despite diminished appeal in a bout between brothers, Tito Ortiz’s cage-side appearance may open another door for Frank.

A rematch of their memorable 1999 fight has been talked about “at length.” Frank hopes it will happen by this time next year, drawing unparalleled MMA ratings.

Jake Shields, who expressed interest in fighting Frank at 185 pounds after capturing the EliteXC welterweight strap in July, is not part of his plans.

“He’s a nice guy; I genuinely like him,” Frank said. “He doesn’t have that aura of stardom about him.”

Robbie Lawler, EliteXC’s middleweight kingpin, may lack desired star power, but he has other qualities that might make the risk worth Frank’s while.

“He’s finishing fights, and they’re dramatic,” Frank said. “Jake does the same thing, but it’s not high drama. That’s why people like me. I’ll go in and I’ll break my friggin’ arm, and I’ll keep fighting.”

While he did not return to action against Slice -- and that fight seems of little, if any, interest to him now -- Frank plans on asserting himself soon.

Frank’s involvement in EliteXC is a curious one. The 14-year MMA veteran’s confidence never falters when it comes to his value. He’s an established commodity, pushing a youthful, unproven company in a wild industry.

He considers “Heat” a good event and commends the organization for its efforts. The CBS show was a step in the right direction, as it affirmed MMA can garner high ratings on primetime network television. Still, Frank sees enormous chinks in the EliteXC’s armor.

“All these things come with money and time, and they don’t have money and time,” he said. “I know they have serious financial troubles and they have lots of indigestion over there. I don’t know if the future of the company will hold. I know that they have very savvy money people in charge, so I don’t see it going away.”

Whether or not she can carry the EliteXC torch now that Slice has been knocked off his pedestal remains to be seen. Frank speaks highly of her talents and compelling persona and feels she has the potential to impact the sport’s future in a big way.

“Gina’s name will forever be known in MMA,” he said. “The things she’s done have been monumental.”

Cross promotion bolstered “Heat,” too. Affliction was exposed to a wider audience, as it allowed former UFC heavyweight champion Andrei Arlovski and International Fight League titleholder Roy Nelson to scrap under the EliteXC banner on network television. Future collaboration may make a dent in the UFC’s stranglehold on the sport, but what happens next remains uncertain.

“I think it was more of an opportunistic thing of just bringing someone in at the time” Frank said. “I don’t know where they’ll go from here. But you know there’s one 800-pound gorilla in the industry, and there’s a bunch of other guys. I think all those other guys should really be working together for a common good.”

Scrambling to make an impact in MMA is no small task, as the UFC has run counter-programming against both Affliction and EliteXC. Two of the UFC’s top draws, Quinton “Rampage” Jackson and Forrest Griffin, reached an even wider audience when their pay-per-view fight at UFC 86 was aired on Spike TV during EliteXC’s broadcast on CBS.

Although Frank never saw the fight, he knows having it run parallel to “Heat” did not help EliteXC’s cause.

“[The UFC is] white collar,” he said. “It’s all or nothing, you’re either with us or against us kind of business, and that’s not how I see the sport.”