The UFC will hold a tryouts for the ninth season of “The Ultimate Fighter” reality series in London on the Monday following UFC 89, which will take place Oct. 18 in Birmingham, England.

With the UK being Zuffa’s main expansion district outside of the United States, it makes sense for them to look for more talent from England, Scotland, Wales Ireland and Northern Ireland. “The Ultimate Fight 3” winner, Michael Bisping, has proven a valuable asset in pushing UK events.

However, the next search’s major stumbling block could be the fact that much of the best talent in the two weight classes they are looking for -- welterweight and middleweight -- are already under contract with Zuffa, Pro Elite or Fighting & Entertainment Group already.

One of the most promising candidates though is Leicester welterweight Jim Wallhead. The 24-year-old judo player has improved by leaps and bounds since his MMA debut three and a half years ago and has won seven out of his last eight fights.

Other fighters with realistic chances of making the UK team include welterweights Jason Ball, Matt Thorpe and Peter Irving, as well as middleweights Brian Adams, Alex Cook and Clifford Hall.

Ross Pointon, a member of season three’s cast, will also be auditioning again. Pointon, who was defeated by Michael Bisping in the light heavyweight semifinals on the show, has slimmed down remarkably and will be looking to make the cut as a welterweight this time. As he produced some of the better television moments of third season, who’s to say he won’t become the first fighter to appear on two separate seasons.

Frenchman Samy “The Dog” Schiavo is currently in the hot phase of preparation for his second UFC fight against Sweden’s Per Eklund on Oct. 18 in Birmingham, England. After losing his debut against high-octane wrestler Clay Guida in April, the 32-year-old from Avignon on the CÃ´te d'Azur has employed a different strategy going into his lightweight battle with Eklund. 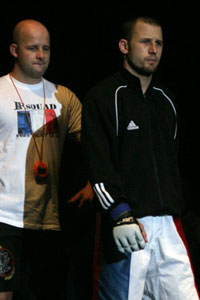 Stephen Martinez/Sherdog.com
Samy Schiavo has a different
game plan for his second trip
to the Octagon.
“For the Guida fight, we were worrying far too much about what Clay would do against Samy,” Schiavo’s older brother and coach James told Sherdog.com. “Now we’re turning the tables and concentrating on what Samy is going to do to Per. Samy will be the clear aggressor in this fight and will be dictating where it goes.”

The French camp is not underestimating the Swedish veteran by any means though.

“We know that Eklund has trained in Thailand to improve his standup game and we know that his Brazilian jiu-jitsu is excellent,” said the elder Schiavo. “I think that after his last fight Per maybe wants to show his striking skills in the UFC and I hope he will, because Samy's kickboxing is very good as well.”

Schiavo’s Bushido Academie team has also had a change of scenery lately.

“We have a whole new facility now,” says James. “I think it is the best in France and one of the best in all of Europe. We also have an international level wrestler with us now who is going to help Samy with his takedowns and top game.”

Schiavo versus Eklund will be part one of a France-Sweden mini-series at UFC 89. Also on the card, Frenchman Jess Liaudin meets Swede David Bielkheden.

Simeon Thoresen, a star pupil of top-ranked Joachim Hansen, will make his long anticipated Japan debut against Pancrase veteran Eiji Ishikawa at Deep 38 Impact on Oct. 23 at Korakuen Hall in Tokyo. The 24-year-old grappling wunderkind has earned rave reviews all across Europe, especially in the UK, where he has collected seven of his nine career victories. The Norwegian welterweight is also ranked on numerous European Web sites.

Recently crowned Dream lightweight grand prix champion Hansen described Thoresen as “a guy with amazing talent, who I truly believe will be a champion in the future.”

The Network Group, Thoresen’s management group, has struck a deal which will see him ease into the highly competitive Japanese landscape through long-running feeder show Deep, which is run by former Pride Bushido matchmaker Shigeru Saeki. There is also the possibility of Thoresen appearing on a future Dream card.

Thoresen was introduced to Japanese fans and media at the event’s official press conference on Oct. 7.

With its parent company in uncertain times, it’s no secret that Pro Elite’s feeder organizations like King of the Cage and former UK powerhouse Cage Rage are the first in danger of having their events cancelled or even shut down completely. There's no tonic like reading your own obituary, yet Cage Rage has announced a few fights for their next event “Bad Breed” on Dec. 6.

Heavyweights James McSweeney and Neil Grove will headline, along with two British title bouts. Ross Pointon and Che Mills will duke it out for the welterweight championship and Tom Watson takes on Matt Ewin for the middleweight strap.

Still, it wouldn’t hurt if promoter Dave O'Donnell were able to find the promotion’s next big star. Cage Rage has done very well creating aces for their shows in the past, helping the likes of Anderson Silva, Paul Daley, Melvin Manhoef and Zelg Galesic reach the level of popularity and skill they are at today.

“Dirty Bob” -- as the 43-year-old kickboxer is dubbed due to his often questionable in-ring behavior -- had visibly gathered some ring rust during his three-year layoff. Patterson, an elder statesman of both MMA and kickboxing, came out of retirement himself to take the bout with the Dutchman and looked more agile, as he scored two knockdowns en route to a unanimous decision.

In other action, Germany’s Martin Zawada snapped an agonizing four-fight losing streak against rookie Brian Molany, which was capped off with a second-round rear-naked choke finish.

Gilbert Yvel was also a winner, as he dispatched big Russian sambo player Sergey Shemetov with a painful toehold just seconds into their opening round. Popular kickboxers Tyrone Spong and Alexey Ignashov were also successful in their bouts against Gary Turner and BjÃ¶rn Bregy under K-1 rules.

You think Hero’s is dead? Think again. The predecessor to Dream is still alive and kicking in Eastern Europe, as Lithuanian Bushido Federation event matchmaker Donatas Simanaitis has revealed the first details for Hero’s Lithuania 2008. The event, which is the fourth of its series, will once again be held at the 12,000-seat Siemens Arena in Vilnius, Lithuania.

Headlining the Nov. 8 event will be a quartet of Baltic stars. ZST and K-1 MAX knockout machine Remigijus Morkevicius is scheduled to appear, along with massive heavyweight Tadas Rimkevicius and Kestutis Smirnovas, who had Kazushi Sakuraba on the edge of defeat two years ago. Pride veteran Egidijus Valavicius, who has already locked horns with Fedor Emelianenko in the past, is also on tap.

The Hero’s Lithuania events have often featured fighters who went on to the big stage, like Ido Pariente (against Jake Shields at Dynamite USA), Yurij Kiseliov (as a tune-up for Sakuraba following the Akiyama fiasco) or Smirnovas, who was drafted right onto Hero’s main roster in Japan following his TKO of Pancrase veteran Hiromitsu Miura in 2005.