As reigning UFC bantamweight champion and one of the top pound-for-pound fighters in mixed martial arts, the 26-year-old Tucson, Ariz., native has indulged in little of the glitz, glamor an excess that has come to define many of his peers. At least outwardly, Cruz seems to have a firm grip on his reality and the fleeting nature of a career in MMA.

“You’re always one fight away from being forgotten,” he says. “The only thing people remember is your last fight. It’s very hard to go out there and just buy all kinds of stuff, be driving this awesome car, have all kinds of stuff going on and have all kinds of bills. I’d rather just keep my life the way it is [and] live very cheap. That way, God forbid, [if] I bust my eye socket and can’t fight for a year, I don’t have a stack full of bills I’ve got to pay without income coming in.

“I really don’t change my life that much,” Cruz adds. “I live in the gym. I don’t do anything else. It’s my life. The only thing that’s changed is I get recognized a little bit more because I’m fighting on the biggest stage on the planet.”

Cruz (18-1, 1-0 UFC) will defend his crown against the once-beaten Demetrious Johnson in the UFC Live 6 main event on Saturday at the Verizon Center in Washington, D.C. An undersized bantamweight, the 5-foot-3 “Mighty Mouse” secured his shot at the 135-pound title with his unanimous decision victory over former champion Miguel Torres at UFC 130 in May. Johnson, a Matt Hume protégé, has Cruz’s undivided attention.

“What’s challenging about him is his mindset,” he says. “He’s got a big heart. He’s got great cardio. He’s got good speed and a good rhythm; he kind of moves a certain way. Other fighters know what I mean. You either fight with a rhythm, or you fight kind of flat-footed and pick and choose when you’re going to throw. He fights off of rhythm. Those are some of the things I’ll have to adjust to as the fight goes on and what I’ve been preparing throughout this camp.”

“He’s considered an underdog, and I know how that feels,” Cruz says. “I came up very similar [to] him early in my career, when I was working a full-time job and trying to juggle that at the same time as my fight career. You have all these naysayers who say, ‘You can’t do it. You can’t beat so and so.’ I went out there and did it. It kind of lights a fire under you to hear that you’re an underdog. I just understand that’s something he brings to the table and is on his mind all the time.”

Cruz will enter the cage with plenty of momentum on his side, including a career-best nine-fight winning streak. The Alliance MMA representative last appeared at UFC 132 in July, when he avenged the only defeat of his career and turned away former WEC featherweight champion Urijah Faber by unanimous decision at the MGM Grand Garden Arena in Las Vegas. Beating “The California Kid” was a significant personal accomplishment for Cruz but not one for which he plans to settle. 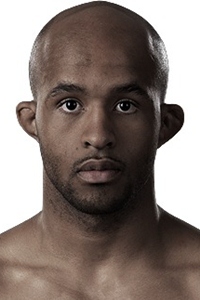 Demetrious Johnson File Photo
Johnson is 2-0 in the UFC.
“My career is bigger than just beating Faber,” he says. “There [are] more goals that I have past that. That was more of something I felt like I kind of needed to do for myself to kind of show the world that I was improving.”

Leading into the Cruz-Faber rematch three months ago, the two men openly shared their dislike for one another. The barbs flew. Cruz admits the fight with Johnson carries no such dynamic.

“We haven’t had any issues,” he says. “I think we respect each other as fighters, but, needless to say, it doesn’t mean we’re not going to go in there and try and punch each other’s faces in. It’s just kind of the game, and we understand that. You have a choice going into the fight. You can either get along with the person and fight him anyways, or you can butt heads and fight him anyways. For me, I have no issue with Demetrious. I’m just going to go in there and do what I do and fight my fight.”

Despite his considerable success, Cruz has his critics. They point to his lack of offensive firepower and the fact that he has never actually finished under the Zuffa LLC banner, instead relying on his relentless lateral movement and unorthodox strikes, as he darts in, darts out, scores and avoids damage. As the shine of fame’s spotlight intensifies, Cruz leans more and more on his experience, his training and an unwavering belief in himself.

“
You’re always one fight
away from being forgotten.
The only thing people
remember is your last fight.

Cruz, who has never been defeated as a bantamweight, puts a premium on perspective.

“I’m in the one percentile in the entire world that gets to do a job that I love, and, on top of that, I get to do it in front of millions of people,” he says. “The trick for me is just to know that I’m out there having fun. When I’m training every day, in the grind in practice, doing two- and three-a-days, getting the crap beat out of me by a new guy every single round, that’s when it sucks. That’s when I’m nervous to come [in and] train every day. That’s when I’m miserable.