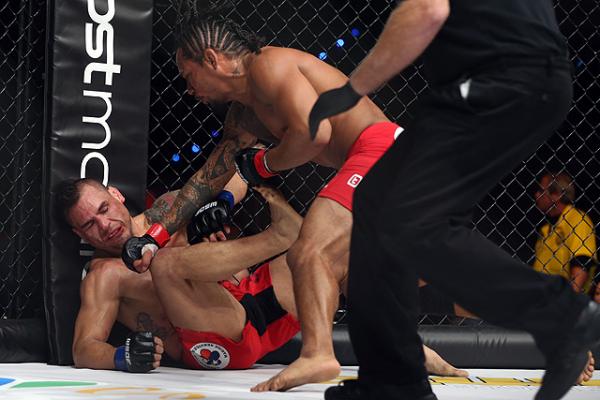 
Forgive Luis Palomino and Lewis Gonzalez if they have career advancement in mind.

Palomino will battle the undefeated Gonzalez in the WSOF 12 main event on Saturday at the Hard Rock Hotel and Casino in Las Vegas, with the winner perhaps emerging as a contender for the World Series of Fighting lightweight crown currently held by Justin Gaethje. The 25-year-old Gaethje has run roughshod over the 155-pound division, rattling off five straight stoppages since arriving in the promotion in March 2013.

An MMA Masters export, Palomino has won nine of his past 12 bouts, including knockout victories over Daron Cruickshank, Charles Bennett and Gesias Cavalcante. The 33-year-old Peruvian brawler made his organizational debut at WSOF 8 in January, when he took care of Jorge Patino with second-round punches at the Seminole Hard Rock Hotel and Casino in Hollywood, Calif. Durable and strong-willed, Palomino has not been finished since Pat Curran submitted him with a Peruvian necktie under the Bellator MMA banner more than three years ago.

Gonzalez has secured seven of his nine victories by knockout, technical knockout or submission. A two-time state wrestling champion in high school, the 26-year-old last competed at WSOF 4 a little more than a year ago, as he earned a technical unanimous decision over the well-traveled Antonio McKee at the Citizens Bank Arena in Ontario, Calif. Gonzalez has never fought outside of his native California.

With the Palomino-Gonzalez headliner as the centerpiece, here are 10 facts surrounding WSOF 12:

FACT 1: Elvis Mutapcic is one of three men to have held the Maximum Fighting Championship middleweight title, along with Patrick Cote and Sam Alvey.

FACT 2: American Top Team’s Alexis Vila was a two-time gold medalist in freestyle wrestling at the FILA Wrestling World Championships and captured bronze at the 1996 Summer Olympics in Atlanta.

FACT 4: When Wanderlei Silva protégé Jorge Lopez climbs into the cage for his World Series of Fighting debut, a total of 1,100 days will have passed since his most recent victory.

FACT 5: Hawaiian bantamweight Bryson Hansen was selected as one of 32 prospective cast members for Season 14 of “The Ultimate Fighter” reality series, only to lose to Marcus Brimage via second-round technical knockout during qualifying.

FACT 7: Cully Butterfield was an All-American wrestler at Itasca Community College in Grand Rapids, Minn., and has trained under four-time kickboxing world champion Duke Roufus at the Roufusport academy in Milwaukee.

FACT 9: Welterweight journeyman Danny Davis Jr., who trains at Xtreme Couture in Las Vegas, has been submitted on five different occasions, three times by arm-triangle choke, once by rear-naked choke and once by heel hook.

FACT 10: Alliance MMA prospect Matt Sayles, 20, has put away his first two opponents in a combined 2:01.