The line has started to form behind Brock Lesnar and Fedor Emelianenko has joined it.

The world’s top-ranked heavyweight and his team of managers voiced their interest on Tuesday in having the touted Russian meet the newly crowned UFC heavyweight champion in “a co-promoted event between the UFC, M-1, and Affliction Entertainment,” according to a prepared press release.

Lesnar dropped perennial favorite Randy Couture at UFC 91 last Saturday three minutes into the second round with a glancing right hook to the living legend’s neck before pouncing on the six-time champion with a flurry of chopping hammerfists for the stoppage.

Couture (16-9) -- who campaigned for a fight with Emelianenko for nearly a year outside the UFC during a contract dispute -- was down on the scorecards, but gaining momentum after he cut Lesnar over his right eye with an angular punch just a moment before his opponent short-circuited his efforts.

The former WWE champion earned a title shot toting a humble 2-1 professional record, but Lesnar silenced numerous critics who condemned the matchup happening based on popularity more than merit.

“I think Lesnar fought a very smart fight,” Emelianenko told Sherdog.com on Tuesday. “It was very interesting to watch. I think one of his strengths was that -- I was impressed by his speed in the fight. I think just from watching the fight, each fighter was waiting for the other one to make a mistake and I think Lesnar was very fortunate to have caught Randy and prevail.” 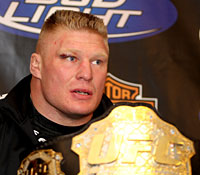 Photo by Sherdog.com
Fedor's focus has shifted
to UFC heavyweight champion
Brock Lesnar.
The reserved Emelianenko, who spoke through interpreter Steven Bash from a movie set in Thailand, kept any shortcomings he saw in the 2000 NCAA wrestling champion to himself.

“It was certainly a good start for him, but his successes and failures will depend on who’s in the ring with him,” said Emelianenko. “Whether I get a chance to fight Lesnar in the future or not, that fight will be about me taking advantage of those weaknesses. Any opponent that he has in the future, for them to prevail would be for them to take advantage and capitalize on mistakes that he makes. Like every fighter, he’s certainly prone to them and I see that.”

Up until September, Emelianenko and his representatives seemed just as dedicated to a bout with Couture as the 45-year-old champion was himself. Last August, the pair met in Los Angeles to cull their resources in the hopes of greenlighting the proposed mega-fight.

However, Emelianenko’s management was unfavorable to the exclusive contract offered the Russian fighter by Zuffa LLC., owners of the UFC, and requested the organization co-promote events with their M-1 Global brand. Zuffa declined the offer.

With a legal stalemate drawing out into 2009 over his own contract, the aging Couture decided to return to the UFC fold on Sept. 2 to face Lesnar instead.

Billed “the fight of the century” by many observers, Emelianenko-Couture seems unlikely now following Couture’s loss to Lesnar. And the uneasiness between Emelianenko’s team and the UFC seems to rage on.

“It is the position of M-1 that the UFC has adopted an anti-Fedor policy because multiple attempts to sign him have not been fruitful,” read the prepared release. “For a company that has tried to market itself as the number one promotion in the world, they are unable to accept the fact that the number one fighter in the world does not reside on its roster of contracted fighters.

Like his managers, the 32-year-old star seems to have made an about-face regarding Couture, though Emelianenko’s next bout has already been decided.

Emelianenko (28-1) faces top-five heavyweight and former UFC champion Andrei Arlovski (13-5) at Affliction 2 “Day of Reckoning” on Jan. 24 in Anaheim, Calif. The event will be co-promoted by M-1.

While M-1 reps predicted Lesnar wouldn’t make it out of the first round with the revered Russian, Emelianenko refrained from naming which opponent posed his greatest challenge –- the experience-heavy Couture or the heavy-handed Lesnar.

“I just never think that way,” he said. “I never concentrate on that. My opponent is the opponent that signs the contract to fight me and ahead of time, looking down a list of fighters that are available and trying to figure who poses more of a danger by studying their games –- it’s something I just don’t concentrate on.”

The UFC and M-1’s fundamental disagreement over Emelianenko’s proposed contract terms is the most obvious hurdle standing in the way of this bout happening -- that’s if you don’t count the fact that Emelianenko has nearly ten times as many bouts as Lesnar. The UFC is not lacking for opponents to face the 6-foot-3, 280-pound champion as well.

Regardless, Emelianenko has picked Lesnar out of the heavyweight line-up over Couture.

“I would choose Lesnar, mainly for the reason I mentioned before,” said Emelianenko. “I’m very sympathetic to Randy. We hung out together. We got to know each other. I have a lot of warm feelings toward him. Based on that, if I had my choice without any outside forces involved, I would choose Lesnar.”