UFC 91 was not only one of the most enjoyable nights of fighting in months, it also offered MMA fans a number of unexpected surprises, pitched battles and literally remade the MMA landscape as we know it. Let's see who won and lost in all that transition.

Having tremendous athletic gifts yet being unable to use them professionally must be exceedingly frustrating. Throughout his undulating career, Brock Lesnar has suffered through failed efforts and missed opportunities that would be difficult to swallow for any aspiring athlete, particularly for one with such unparalleled promise.

On Saturday night, Lesnar finally put a nail in the coffin of the vagabond career that prevented him from pursuing his true dream: to make a living and reach the most elevated heights attainable as a professional athlete. By capturing the most coveted position in the UFC's heavyweight class, Lesnar has more than secured himself a place as a true competitor in this league and sport. And to do so at 31 years of age after abandoning a previous career and failing to jump-start another is utterly remarkable. Lesnar, then, is an Horatio Alger story and the prodigal son wrapped into one. Wayward and confused, but forever determined to follow his nagging internal compass, Lesnar gutted through upheaval and career turmoil to once again find professional balance and personal serenity. And now he can add the UFC heavyweight championship belt to that peace of mind. Not too shabby, Brock.

Believe it or not, there was actually a period recently when MMA fans and experts alike were questioning whether submissions had become obsolete in professional MMA competition. Sure, the best of the best grapplers could still use their submission skills, and the control that wrestling and jiu-jitsu offered still had applicable value. But triangle chokes and armbars? Overrated and useless, it was said. Some plainly insisted submissions could not regularly be applied if any fighter simply trained defensive techniques enough. 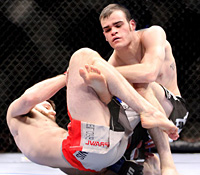 Photo by Sherdog.com
Dustin Hazelett made a
statement at UFC 91 with
his ground game.
Those who asserted such nonsense were not the clairvoyant among us, and UFC 91 was the personification of all counter argument to their absurd views. While every facet of the MMA game is both important and necessary, UFC 91 was a keen reminder that whether one is a jiu-jitsu world champion, black belt or fan of Skoal, submissions can still be effectively applied at the highest levels of modern MMA.

If you purchased this event on Saturday, you won two ways. First, the prefight collective wisdom about UFC 91 was that the card was main event top heavy. In other words, while the fighters who weren't on the main event were certainly capable athletes, the conventional assessment suggested that there was a noticeable lack of celebrity, meaningfulness and intrigue about their bouts. Alas, those contentions were wildly off the mark.

UFC 91 saw title contenders emerge, back-and-forth exchanges, technical mastery, submission and knockout victories and arguably the most high-profile fight in UFC history. Second, while the UFC tries to offer fight fans as much free content as possible, almost monthly PPV events are a toll on anyone's pocketbook, not to mention the noticeable national slump in consumer spending. But fans that purchased this event got to watch every last bit of it: Every single fight was aired for fans' viewing pleasure. While some of this has to do with timing and fast finishes in the night's fights, part of this is also generosity. The UFC is not obligated to use all of their allotted time to showcase their product. They were given extra time and chose to air all nine fights on the card. That's good for the UFC, for the fighters who could use more exposure and for fans who want bang for their buck. Hats off to the UFC for literally giving fans what they paid for: the entire fight card.

All that can be asked of anyone in any profession is that they commit themselves to work as diligently as possible to maximize whatever potential they have. To bring about that potential and to subsequently use that new ability to create a dream fulfilled is virtually impossible; "virtually" being the operative word and we're not talking about anyone ordinary. Without fawning or offering phony genuflecting, it is reasonable to state Florian is nothing short of incredible.

He was thrust into the deep end of the MMA pool very early in his career, and rather than be overwhelmed, he instead sacrificed and struggled to capture the piecemeal success he needed to get by at each juncture. And all along the way he worked tirelessly to actually better himself. The fruits of his labor were not immediate, but the gradual progression has now amassed to a stunning degree.

Florian was once a talented if very green and horribly incomplete black belt. He is now easily one of the most technical, durable and talented fighters in the entire UFC roster irrespective of weight class. Even more impressively, he has sought after a title shot with one of the sport's best and has earned it by never accepting a flimsy challenge and never settling for anything less than an obstacle that would force him to be a better Kenny Florian by learning how to conquer it. Florian deserves admiration for his achievements, but what's more impressive is not the award itself; it's what was required to get there.

It is virtually impossible to overstate just how significant this event was for MMA's premier brand leader. First, one of the most well-known and marketable commodities in Brock Lesnar is now the champion of the heavyweight division. His role as Alpha Male doesn't change the heavyweight division necessarily, but he does reinvigorate it somewhat. Lesnar brings PPV buys wherever he goes, but his presence in heavyweight matchups on UFC cards now provides more exposure than his heavyweight opposition would otherwise receive. Second, while the quantity of coverage for this event didn't increase significantly, the quality shot up exponentially. Print outlets such as the New York Times, Wall Street Journal and Los Angeles Times all covered the event with thoughtful, evenhanded accuracy. Most importantly, ESPN, the sports news leader, provided an avalanche of thoughtful, detailed coverage on several channels, including ESPN.com, ESPN radio and countless loops on Sports Center.

More than any other event in UFC history, UFC 91 was taken seriously by the vast majority of the mainstream sports journalism community. And to think, a professional wrestler turned failed football player turned MMA fighter provided a huge portion of that push toward recognition and legitimacy.